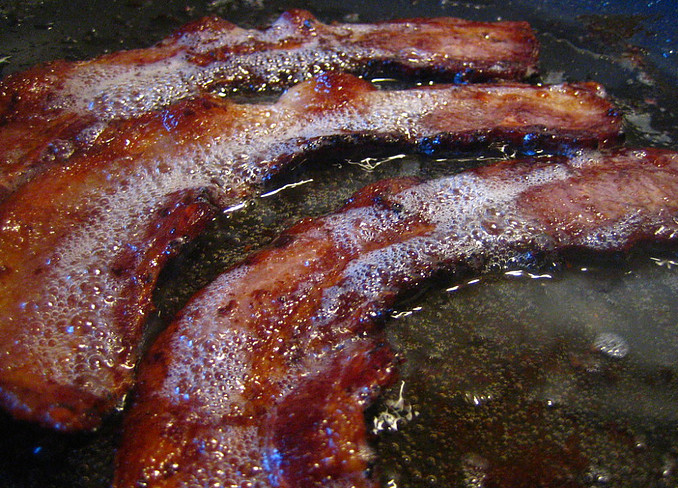 Have you been wondering why bacon takes so long to cook?

You can cook any other meat that thin in seconds, but bacon takes forever.

What’s going on with this little strip of meat?

Beyond curiosity, do you also want to know if there is a faster way to make it?

Why Does Bacon Take So Long to Cook?

The primary reason bacon takes so long to cook is you’re rendering the fat and cooking the meat. The rendering is what takes time. Additionally, bacon takes longer to cook because you must cook it slowly at a lower temperature and preferably in a preheated pan. Of course, crispy bacon will take slightly longer than limp. And if you are short on time or simply don’t want to wait, making bacon in the microwave may be a good option.

1. The Fat Needs to Render

To render means to cook the fat out of the bacon and is what takes the most time.

Cooking the fat out gives you bacon grease, which many people save and reuse.

Also, cutting your bacon in half ensures it will fit in the pan, and cook the ends.

Interestingly, Serious Eats recommends cutting the bacon into one-inch pieces or smaller to expose as much of the bacon to the pan surface as possible.

It doesn’t necessarily speed up the cooking process but it does give you more bacon grease.

Plus, the more fat you render, the less rubbery fat you’ll leave on the bacon.

I hear the phrase “Make your bacon low and slow” all the time.

If you try to cook your bacon too quickly and on high heat, the fat won’t have time to cook out thoroughly, and you’re more likely to burn your bacon.

You could even burn the bacon grease.

Another thing to keep in mind is the kind of pan you use.

If possible, cook your bacon in a cast iron skillet because it makes the best bacon.

I always preheat my skillet first, but it will take about the same amount of time from start to finish whether you do or don’t.

Or, many people prefer to make their bacon in the oven. And while it’s not quicker, you don’t have to watch it as closely.

RELATED > > > > > Should I Preheat My Cast Iron Skillet to Make Bacon

If you like your bacon chewy or limp, it will take less time.

Some people ask if limp bacon is fully cooked, and the answer is yes.

Pork needs to get to an internal temperature of 170°F, and given how thin (even thick-sliced) bacon is, it will have no trouble reaching that temperature.

However, it won’t render as much fat.

I personally like mine crispy and don’t mind waiting the extra minute or two.

Bacon typically takes 8-12 minutes to cook on the stovetop, depending on the temperature and thickness of the bacon. And keep in mind, you shouldn’t cook it any higher than medium.

4. The Microwave is the Quickest Way

So far, we’ve only talked about cooking bacon on the stovetop, but you can cook bacon in the microwave if you don’t like waiting.

However, it can still take a while if you cook a whole pound.

According to Wiki How, there are two ways:

1. The Paper Towel Method – Place bacon slices on a microwave-safe plate covered with a couple of paper towels to absorb the grease. Add the bacon and cover with more paper towels. Heat 30-60 seconds per slice. Unfortunately, you won’t get any bacon grease using this method. And you have to use a lot of paper towels.

2. The Microwave Bowl Method – Hang strips around the edge of a microwave-safe bowl and put the bowl on a large plate to catch the grease as the fat cooks out of the bacon. Cover with paper towels to keep the grease from splattering, and cook for 60-90 seconds per slice. This method takes the bacon a little longer to cook, but you will get bacon grease that you can reuse, and you won’t use as many paper towels.

How to Cook Bacon in the Microwave

As you can see, bacon takes so long to cook because the fat needs time to render.

Plus, bacon takes more time because you can’t cook it at a high temperature for speed. Low and slow will give you the best results. And making it too quickly will most likely cause it to burn.

You can shave off a minute or two by not cooking it until it’s crispy. However, it’s probably not worth it unless you prefer limp bacon.

The microwave is quicker if you’re only cooking a few pieces Still, you will use paper towels, and some people consider that wasteful.

Let me know your favorite way to cook bacon, and if you are bothered by the amount of time it takes to cook.

One solution I didn’t mention is using a bacon press. A bacon press can cut the cooking time in half. If you would like to know more, check out my Bellemain Cast Iron Bacon Press Review.