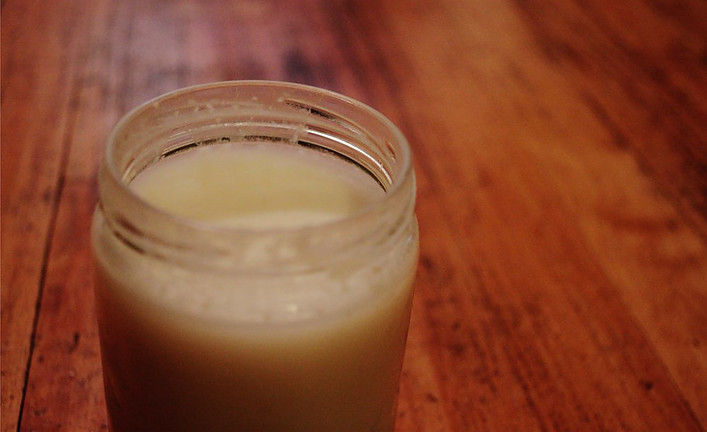 Have you ever wondered if bacon grease is lard?

You probably know the best way to get bacon grease is by cooking bacon.

Maybe you even know that lard is rendered pork fat.

However, you might not know what the differences are, if any.

Yes, and no. Lard is any pork fat that has been rendered and solidified. Although bacon grease is pork fat, it comes from bacon that is cured and smoked before being packaged and sold. And this makes bacon grease different from other types of lard, primarily the flavor it imparts.

Lard is rendered (melted) pork fat that is solidified. you can make it out of any pig fat, including fat from the back, belly, and around the kidneys.

You can buy it at the store in the baking aisle or make it yourself. It’s generally located near the shortening if you are buying.

However, store-bought lard is often hydrogenated and is not the same as what you can make yourself.

Lard used to be what everyone used in cooking. But when scientists told us that saturated fat was bad, vegetable shortening replaced lard in many cases.

Lard fell out of favor with the public after research revealed that saturated fat was bad for us. And that vegetable shortening was a better alternative.

Furthermore, shortening had a longer shelf life and didn’t need to be refrigerated.

However, in the 1990s, we learned that trans fat was worse than saturated fat. And guess what had trans fat? Vegetable shortening.

Although brands such as Crisco reduced their trans fat to almost zero, lard started to make a comeback.

Whether the comeback is because lard has no trans fat or we learned that chefs never stopped using it, the fact is lard has recently regained much of its favor it had lost.

On the other hand, I don’t know how many people know about it.

As I already said, you can purchase lard at the grocery store, but it may be hydrogenated to make it last longer. And that means it’s not as healthy as the lard you make yourself.

You can learn more about lard at Nutrition Advance’s article on lard.

Making your own lard is easy, according to BBQ Host.

You’ll need to buy leaf fat (around the kidneys) or fatback (the back of the pig) from a butcher or local pig farmer. Or you can save and freeze your own pork fat until you have enough.

Ask the butcher to grind it into small pieces if you buy it. Sometimes they will, and it will save you from having to do it yourself.

You’ll need at least one pound of fat to make it worthwhile.

Before you begin, partially freeze the fat for best results (approximately one hour). And decide if you will use your oven, stovetop, or a slow cooker.

If you have a cast iron Dutch oven, use that if making the lard in the oven. Otherwise, any large pot will do.

To watch someone making it, see the video below.

What is Bacon Grease?

Bacon grease is a type of lard that will have a bacon flavor to it.

The best way to get it is to make bacon.

As the fat in the bacon renders, it will gather in the pan.

Simply transfer it to a container and store it, usually in the refrigerator. Use it in place of oil when cooking certain foods.

I usually make bacon and use the grease to fry the eggs. Recently, though, I’ve started using it for other things, too. For example, reheating leftover stir fry or making a cheese quesadilla.

Some people strain it first, and others don’t. The advantages of strained bacon grease are longevity and pureness. Moreover, many people call it liquid gold, claiming it is the “gold” of fats and because it is a gold color in liquid form.

How is bacon grease similar to lard, and how is it different?

Hopefully, you now understand how bacon grease is technically lard, and yet it’s different.

The primary difference is bacon grease comes from bacon that has been cured and smoked, and lard comes straight from the pork fat. This mainly affects the flavor.

Both bacon grease and lard are rendered pork fat that you can buy at the store or make yourself.

However, most people make their own bacon grease because all you have to do is cook some bacon. And the rendered fat left behind can be saved and reused.

Making lard is a lot more work, and I’m guessing not many go to the trouble of making their own.

However, lard is making a comeback, according to many sources.

Have you ever made lard or bacon grease?

If you are looking for a container that strains grease, you might want to check out my Talisman Designs Bacon Grease Strainer Review.