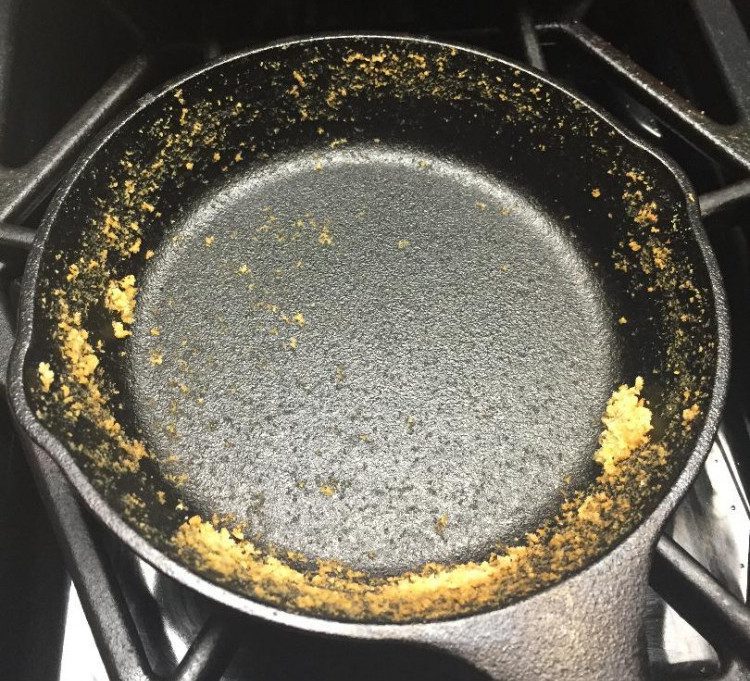 Do you want to know, “Why does food stick to my cast iron skillet?”

You should note that pretty much everyone has faced this problem at one time or another.

But if it is continually happening, or you’re new to cast iron, you might be confused.

Especially if you’ve been told cast iron is nonstick.

Cast iron will never be as nonstick as Teflon, or at least not for years of regularly using it and building layers of seasoning.

However, it can be relatively nonstick now by following a few rules.

And over time, it will become more nonstick, but you will need to keep certain things in mind even then.

For now, though, let’s look at the various reasons your food might be sticking, so you can take steps to fix it.

Why Does Food Stick to My Cast Iron Skillet?

One of the main reasons food sticks to cast iron is you’re not getting the oil or fat hot enough before adding the food. Or you’re heating your pan too fast. Food sticks when its molecules chemically bond with the iron. Hot oil reduces sticking by instantly heating the food as the fat binds with the pan creating a barrier between your food and the metal. Proteins will continue to stick for a bit, meaning you need to be patient and wait for them to release on their own. Two other reasons food might stick is it’s time to reseason your pan or you have a new skillet.

1. You’re Not Getting Your Pan and Oil Hot Enough

Many people don’t realize that both the pan and oil need to be hot enough before you add the food.

Unless the food itself is very fatty, like bacon, your pan needs to be hot.

Whether you heat the skillet and then add oil or heat the pan and oil together is debated, but the most important thing is to have them both hot.

This potential sticking problem has to do with the way food, oil, and iron interact with each other.

The molecules in the food will bond with the metal unless there is a barrier.

And heated oil is that barrier.

Or sometimes the problem might be that you aren’t using enough fat, especially if your pan is new.

So, in addition to getting your oil and pan hot, you also need to use more fat.

A well-seasoned pan has a polymerized layer of oil, but you still need some oil for cooking, though not as much as a skillet with less seasoning built up.

In other words, sometimes you might not be using enough fat, but sometimes all you need to do is wait until your pan and oil are hot.

Why Does Food Stick to My Cast Iron Pan?

2. You Are Heating Your Pan Too Quickly

Although it is important to wait until your pan is hot, you don’t want to heat it too fast.

Heating your skillet too quickly will create hotspots and cook the food unevenly.

Cast iron is excellent at retaining heat, but it doesn’t naturally cook your food evenly.

But heating the pan slowly allows the entire surface to heat rather than some areas getting hotter than others.

If you’re having problems with the meat sticking, it might be because you don’t realize the molecules in protein initially bond with the surface of the pan.

Even if you have a well-seasoned pan and you’re using enough fat, the meat will stick when it touches the surface.

But, if you wait, the heat and the oil will brown the outside and cause it to release.

When searing or trying to get a brown crust on the outside, resist the urge to turn it right away.

Since the meat will release on its own, you simply have to be patient.

Why Does Protein Stick to the Pan?

4. Your Pan Needs to Be Reseasoned

Even though using your cast iron regularly is one of the best ways to build up the seasoning, it doesn’t mean there isn’t a “give and take,” so to speak.

For example, cooking acidic foods or scrubbing your pan a little extra to get it clean are two reasons why your seasoning might break down.

Not using your pan regularly is another reason.

So, yes, using your pan is a good way to build up the seasoning.

However, most people agree that using it alone, and never reseasoning it in the oven, is enough.

Lodge Cast Iron says using your pan is the best way to build up the seasoning.

On the other hand, they also recommend you reseason your pan two to three times a year.

This means, if your food is starting to stick, it might be time to reseason it.

5. You Are Still Breaking In a New Skillet

Eggs are one of the most common foods that people have trouble cooking in cast iron.

It’s certainly not the only thing that can stick, but eggs sticking are something many people have experienced.

When I started cooking with cast iron, I knew very little. I thought if I cooked bacon and then eggs in the bacon fat, I would be fine.

But that wasn’t the case. My eggs stuck to the pan (much like the eggs in the video below did).

Breaking in a new skillet has its challenges, but it doesn’t mean you have to live with your food sticking.

For me, the solution was seasoning my pan in the oven, but for you, it might be cooking with a little bit more fat.

Or maybe you need to heat your pan more slowly or wait for it and the oil to get hot.

Now that you’ve asked, “Why does food stick to my cast iron skillet?” and considered the five reasons, hopefully, you have a better understanding of how you can fix the issue.

Having food stick to your cast iron is frustrating for sure.

However, knowing that you have to heat your pan slowly, but get both the pan and the oil hot before adding your food, is huge.

And knowing protein will release on its own if you are patient can solve the mystery of why your meat is sticking.

On the other hand, if you already know these things and are cooking accordingly, then your food may be sticking because it’s time to reseason your pan.

Equally as important to know is a new skillet does not come well-seasoned.

In other words, breaking in a new skillet may require a bit more oil to keep your food from sticking.

How have you, either successfully or unsuccessfully, handled food sticking to your pan?

Let me know in the comments.

2 thoughts on “Why Does Food Stick to My Cast Iron Skillet? – 5 Reasons to Consider”