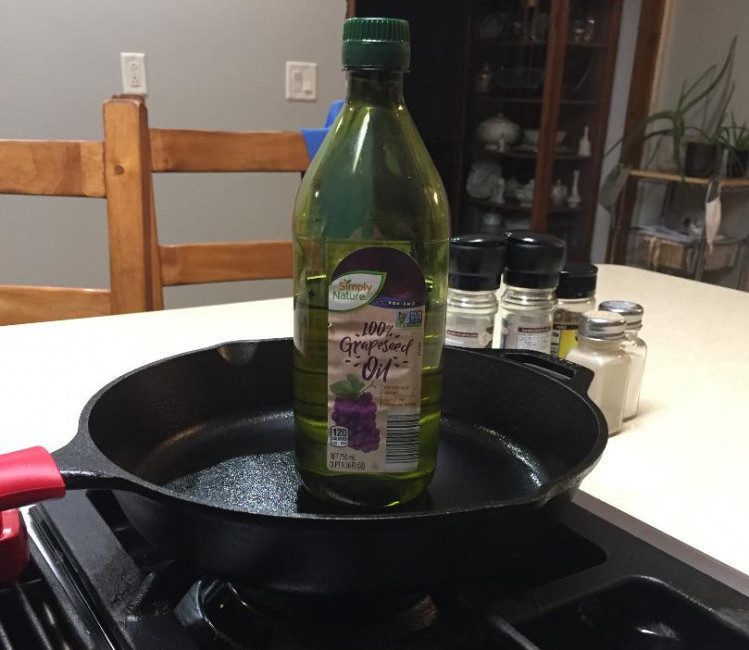 A common question people ask is, “Why preheat my cast iron skillet before adding oil?”

Indeed, everyone agrees that your oil must be hot before adding food, but some say it’s not necessary to preheat the pan before adding the oil.

Should you preheat your skillet before adding the oil, or does it matter?

As is often the case with cast iron cooking, there are many opinions.

However, the ones who said to preheat first gave reasons.

So, let’s consider five of them, and you can decide if they’re legitimate or not.

Why Preheat My Cast Iron Skillet Before Adding Oil?

Preheating your skillet before adding oil means getting it warm, not smoking hot (unless searing). By preheating it first, you are making sure your pan is dry before adding the oil. Water and oil heating together equals splatter. You are also less likely to get sticky polymers. Sticky polymers are a result of partial polymerization or that gumminess you sometimes find in your pan. But, when you heat the oil and the pan together, there is more risk of the oil burning or breaking down, which will affect the taste. In addition, many people claim heating them together will cause your food to stick.

1. Preheating Allows the Skillet to Get Bone Dry

I’m not sure why your pan would have any moisture in it, but preheating will take care of it if it does.

But so will using a lint-free towel.

The reason you want your skillet dry is that water and oil together cause the oil to splatter.

The idea is to have a bone dry pan when you add the oil.

It’s also why it’s best to pat your meat dry before adding it to the pan.

Because the less moisture in the oil, the less splatter there will be.

2. Heating the Oil With the Pan Promotes Sticky Polymers

Sticky polymers are not something you want in your skillet.

And according to Harold McGee, food scientist, author, and journalist, “If you heat the oil along with the pan, then it has more time to break down and combine to form large, sticky polymers–that kind of stuff that, taken to the extreme, forms the ‘seasoning’ on a cast iron pan. The same breakdown also generates off-flavors.”

You’ve probably experienced gumminess in your cast iron before.

When you season your pan, you get polymers too. But with seasoning, you are leaving the pan in for an extended time (usually an hour) with a thin layer of oil.

And the polymers are chemically bonding to the pan to create a plastic-like barrier.

When cooking with food, there is not enough time for the oil to polymerize.

Therefore, you get a partially polymerized pan or, in other words, sticky polymers.

I’m not sure how often this happens, but if your oil does break down because you heated the oil and the pan together, now you know what you can expect.

I may not be following this argument correctly, but several people said you should preheat the pan before adding the oil because it helps you better know where you are in the process.

You are less likely to forget about the pan, get it too hot, and burn the oil.

Plus, it better helps you know when you’re oil is hot enough.

I agree that it is better to get your pan too hot with no oil than to burn the fat, but I don’t understand how preheating before adding the oil helps you keep that from happening.

Nor how it lets you better determine when the oil is hot enough.

So, my conclusion is that the added step means you have to pay closer attention while you’re cooking.

The video below addresses this reason as well, but I still don’t get it.

4. Heating the Oil and Pan Together Can Mean Burnt Oil

If you start out heating the oil and pan simultaneously, apparently, there is a greater chance of your oil burning.

In other words, the less time your oil is in the pan, the better.

Because if the oil burns, it will affect the taste of your food.

Also, the oil has less time to break down, which I mentioned above.

Culinary Institute of America assistant professor David Bruno says, “When you start oil in a cold pan, it’s exposed to heat for a longer period, and it can break down faster, which affects taste.”

Simply put, you don’t want your oil to burn or break down.

The question is, does heating the oil and pan together truly make this more likely to happen?

5. Preheating Before Adding Oil Helps Your Food Not Stick

Other than it not mattering if you preheat your pan before adding oil, this reason was the most debated.

I heard that preheating keeps your food from sticking said often, but no one could explain why.

Except for one person who said it’s a myth based on the Chinese proverb, “Cold oil in hot pan and food won’t stick.”

He says the proverb has to do with cooking with a wok, in which case, it’s kind of true.

Whenever you want the metal to be hotter than the smoke point of the fat or oil you are using, you will need to heat the pan first.

When using cast iron, this would be true for searing a steak, for example.

In other words, preheating your pan before adding the oil will not necessarily keep your food from sticking.

How to keep your food from sticking is a whole other conversation.

My Experiment: One Pan Preheated and the Other Cold

I don’t think I have ever heated the oil and pan together.

So, I decided to experiment to find out if it made a difference.

Here are the results:

The pork chops turned out the same, with no sticking. Because, by the time I turned the meat, they had released.

The oil didn’t burn or break down to my knowledge.

And the clean-up for both pans was the same amount of work.

Therefore, my conclusion is that it doesn’t matter when you add the oil as long as both the pan and oil are hot when you put in the food.

But I will probably continue to heat my pan first before adding oil.

Hopefully, you found “Why Preheat My Cast Iron Skillet Before Adding Oil?” informative and helpful.

Since people have different opinions about the answer, I wanted to dig into some reasons for preheating your pan and adding the oil.

Making sure your pan is dry so the oil won’t splatter was one reason.

Another reason was to avoid getting sticky polymers or that gumminess we all experience on our cast iron from time to time.

Additionally, preheating the pan first can help you track the process better and know when the oil is hot enough.

If you decide to heat the oil and pan together, you are more likely to burn it and affect the flavor.

Lastly, we pretty much debunked the idea that preheating your skillet first keeps your food from sticking.

I didn’t find any of the reasons compelling and concluded that it didn’t matter if you preheated the pan and then added the oil or if you heated them both at the same time.

As long as the oil and pan were both hot when you started cooking, you should be fine.

What do you do?

Preheat the pan first or together?

Do you have any particular reason for why you do it the way you do?