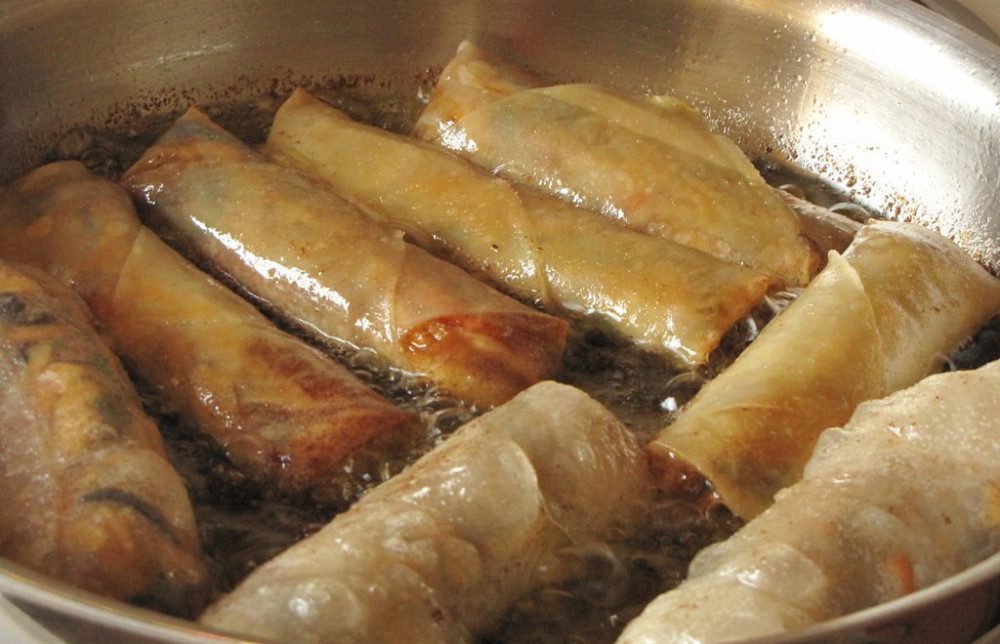 Do you love the way oil makes your food taste but are tired of the splatter?

Are you wondering, “Why does oil splatter when I’m frying?”

Well, there is a reason for the popping and spitting and spattering.

So, let’s find out what it is.

Why Does Oil Splatter When I’m Frying?

Oil splatters when frying because tiny water droplets from the food turn to steam and need to escape. Because water is heavier than oil, the water droplets get trapped below. And since oil burns hotter than water when it’s boiling, the water quickly turns to steam. And that’s when it needs to escape. So the steam rises to the surface and, at the same time, spits and pops, bringing the oil with it.

The Science of Splattering Oil

The answer above pretty much covers the science, but I will add a few more points:

Some Solutions to Consider

Are there ways to reduce splattering or get rid of it altogether?

Or are you doomed to being spit upon when frying with oil?

Have no fear, because I found at least five ways to reduce the dreaded oil pops:

How to Reduce Oil Splatter

When making bacon, the oil can splatter because there are water droplets from the bacon.

And when you add the eggs to the bacon grease, more water droplets are introduced from the eggs.

So, I decided to test two of the above solutions to see if they worked: salt and water.

In the first pan, I added a little salt before adding the bacon. Bacon is already salty, so I was a little skeptical that this would be the best solution for already salty food. But it was simple, and I like simple.

I put enough water in the bottom for the second pan to cover the surface and then put in the bacon. This is the way I was rooting for.

I turned the burners on and started cooking both pans. As you can see in the photo to the right, they look different. Neither are splattering at this point.

But as the bacon in the salted pan was finishing (and they finished long before the ones in water), I noticed a few splatter spots on the stainless steel.

The ones in water still weren’t splattering, but as the water boiled away, the bacon didn’t look too much different than it does in the photo.

So I had to keep cooking it.

And that’s when the splattering began. It wasn’t bad, but it wasn’t splatter-free either.

Both ways turned out crispy bacon. It was a little crispier than I usually make because it’s for BLT salad, and we like it extra-crispy (the bottom piece is closer to the way we like it for breakfast).

Both ways worked, but neither way eliminated all splattering. It probably reduced it some, though.

I probably will just deal with the splattering or get a splatter screen because neither way worked well enough for me to adopt it as a way to cook bacon.

Once the splatter screen arrives, I will let you know how it works out.

Even though the salt didn’t make the bacon taste too salty like I feared, I still thought it was a waste of salt. But I would choose to add salt over water if I had to pick.

Cooking your bacon in the water took too long and had more splattering after the water boiled away. The bacon was nowhere near done enough to eat imo, so I had to cook it longer.

The bacon all tasted the same.

Maybe some people would be able to taste the difference between the two, but not me.

If you were asking, “Why does oil splatter when I’m frying?” now you know. It’s because the oil pops out with the water when the water turns to steam and escapes from underneath.

And, as a result, you feel the oil hitting you and see the evidence on your countertop and stove.

No solution is perfect. But all the above ways are worth a try if you are overly bothered by the splattering.

If you have tried one of the other ways, let me know how it works. And if you have another way of reducing splattering, be sure to share it below in the comments.

If you would like to find out more about the Gorilla Grip Splatter Screen, check out my review. And find out what I thought of it.