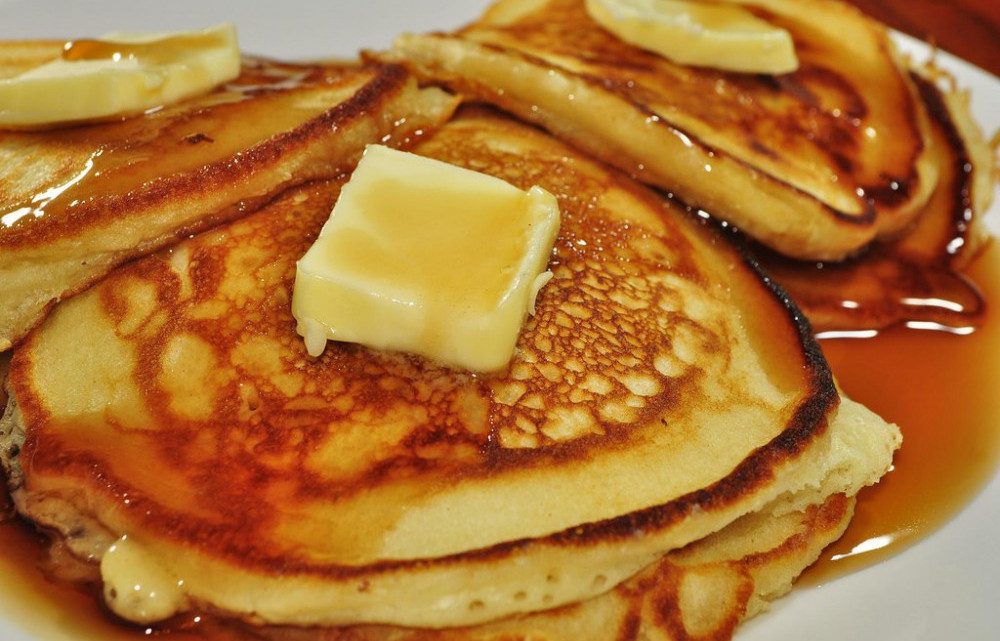 Do you love pancakes and cast iron but not so much together?

Are you wondering, “Why do pancakes stick to my cast iron skillet?”

Have you been considering giving up and using nonstick because it would be easier?

Oh, you know cast iron is better, from the taste of the pancakes to the iron being healthier than Teflon, but if your pancakes keep sticking, what can you do?

Why Do Pancakes Stick to My Cast Iron Skillet?

There are at least five possibilities for why your pancakes are sticking to your cast iron pan. Flour needs time to absorb the liquid, so your pancakes might stick if you don’t let your batter rest. Using too high of heat will cause your pancakes to burn, but they may also stick. In addition, not using enough fat is another reason for pancakes sticking. And if the pan’s surface isn’t nonstick, or you’re using the wrong burner for the size of your pan, guess what? Your pancakes could get stuck in the skillet.

1. You Didn’t Let Your Batter Rest

Letting your batter rest is something I didn’t know was important.

But, if you mix your batter and immediately add it to the pan, the flour doesn’t have enough time to absorb the liquid fully. Therefore, it will be dry and more likely to stick to the skillet.

Monaz Dumasia, food writer, stylist, and recipe developer, says, “The ‘resting’ allows the gluten in the flour to relax and the starch grains to swell,” meaning you will also have lighter, fluffier pancakes in addition to them not sticking.

Ideally, you will let your batter chill and rest for 35-40 minutes, but at a minimum, 20 minutes.

I think the longer time is for added fluffiness and that 20 minutes is more than sufficient for your pancakes not to stick to the pan.

2. Your Heat is Too High

I don’t know if people naturally think you should cook pancakes on high heat, but so many people gave this as their reason for pancakes sticking.

But I had to laugh out loud when one person said the opposite. This person thought you should cook your pancakes on high heat and sear them just like you would a steak.

But the overwhelming majority said to take your time heating the skillet on medium heat.

And once you get ready to add the batter, lower the heat even more to medium-low or even low.

Heating your skillet slowly is key because it allows the pan to heat evenly. If you heat it too quickly, you get hot spots and uneven cooking.

Since pancakes have a short cooking time, hotspots are the enemy.

Some people think you need more fat when using cast iron, but others said this isn’t true.

By fat, I mean oil, butter, or bacon grease.

Most people used butter because they liked the flavor that butter added to the pancakes.

If you watch the video below, notice the lack of fat in his cast iron skillet.

His pan didn’t need fat because his pan was well-seasoned. There was none of the bumpiness you might get with newer cast iron pans.

So, if your pan has a bumpy, pebbly feel to its cooking surface, you will need some type of fat for sure.

And if it is still sticking, it may be because you need to add more.

4. Your Pan Needs to Be Reseasoned

Every so often, the bacon and eggs I cook in my skillet every morning start to stick. That’s when I know I need to reseason my pan in the oven.

I wrote about it in Seasoning Your Cast Iron Skillet – New or Old.

The goal is to have nonstick cast iron cookware, but it takes time and much use.

Now, I’m not going to say that you can’t make pancakes in a new cast iron skillet or one that is pebbly.

I’m not going to say that because I just cooked pancakes in both my relatively new 10.25 and 12-inch Lodge skillets with no problem.

The video above will say not to use this type of skillet, and I would agree if you have more nonstick skillets to choose from as he does.

5. Your Skillet Doesn’t Fit the Burner

Another possibility is your pan is too big for the burner you are using.

You need the whole pan to heat as evenly as possible because if it doesn’t, you get hotspots.

And if your pan is too big, the hotspot will be in the middle of the pan, and everywhere else will not cook the same as it does in the middle.

I wanted to see if I would have problems with sticking if I made pancakes in my newer Lodge cast iron skillets.

Both skillets have the pebbly cooking surface that all Lodge cast iron comes with.

Initially, I wanted to find out if sugar was a cause for pancakes sticking, so I made two batches, one batch with the baking mix recipe that called for sugar and the recipe from the video above.

Then as I did more research, I decided that using sugar as a reason your pancakes would stick was most likely a myth.

At the same time, I also realized that the cooking surface of a pan was a possibility. And since I cooked my pancakes on bumpy Lodge cast iron, I could talk about that.

But none of my pancakes stuck.

So, I proved that sugar isn’t a factor, and neither is a pebbly surface like Lodge’s cast iron cookware.

These are the things I did:

So, if you were asking, “Why do pancakes stick to my cast iron skillet?” hopefully, you have found some possible reasons.

It might be because you didn’t let your batter rest, or you are using too high of heat to cook your pancakes.

Or it could be you need to add more fat or reseason your pan to give it more nonstick properties.

And do try to use a pan that is the right size for your burner.

No huge 12 or 15-inch skillets on tiny burners because getting the pan to heat evenly will be a problem.

I believe my experiment showed that you can successfully make pancakes in newer Lodge skillets that still very much have the sandpaper feel.

If you have any questions, be sure to ask in the comments below. Or, if you know of other possibilities for why pancakes might stick to cast iron, I would love to hear them.