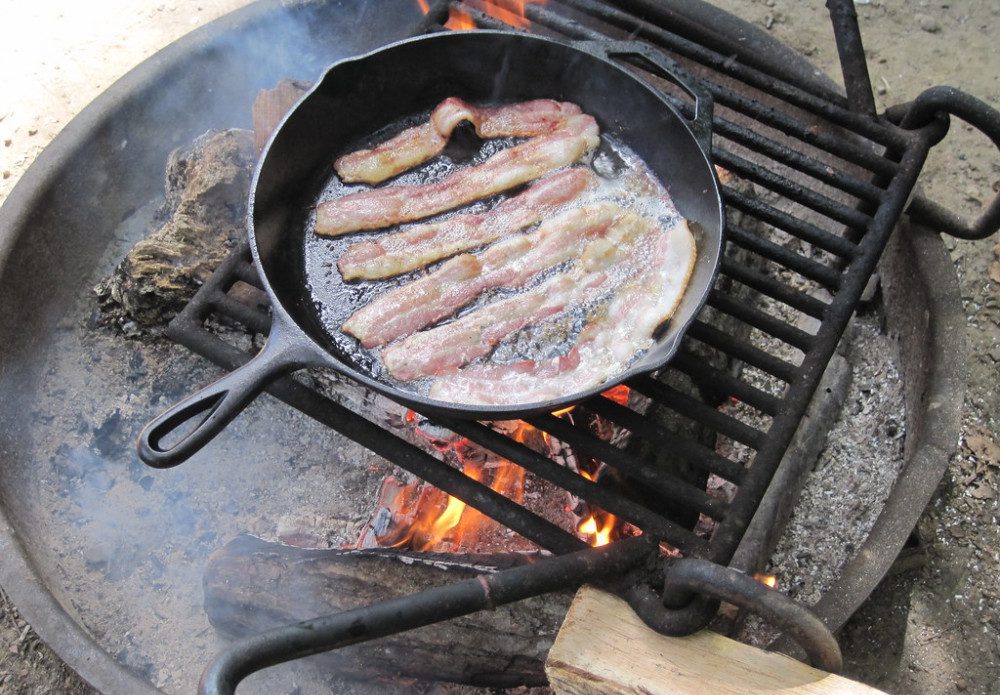 Do you take your cast iron skillet with you when you go on vacation and wonder, “Who else travels with a cast iron pan?”

It doesn’t matter if you’re camping, staying at an Airbnb, or visiting family. You want to know you’ll be able to cook in your cast iron while away from home, even if you have to take it on the plane.

Are you curious to know if anyone else does the same thing?

Together, we will explore what others are saying and find out if anyone else does indeed travel with their cast iron pan.

Who Else Travels With a Cast Iron Pan?

You will typically travel with cast iron by plane or driving. By ship, train, or bus are also options. What about hiking? You may be going to someone’s house, on vacation to the beach, or in the mountains. Maybe your job requires you to travel with cast iron. You could be staying in a tent or camper, or even an Airbnb or cabin that supplies cookware. Wherever you are going, you will have a chance to take your cast iron pan with you. But who does that? You may be surprised at the number of people who are traveling with their cast iron skillets.

Six years ago, someone traveled abroad, purchased a $200 skillet, and needed to get it back home. The skillet was bigger than this man’s bag, so he wanted to carry it on the plane.

Would this person be allowed to do so?

Per TSA rules: “Pots and pans are generally allowed in both carry-on and checked bags. However, cast iron skillets are prohibited in carry-on bags and must be placed in checked baggage,”

With a note: “The final decision rests with the TSA officer on whether an item is allowed through the checkpoint.”

Another person tells of their experience of having their brand new cast iron frying pan confiscated by a TSA agent, saying it could be used as a weapon.

When this person asked the TSA agent about going up and down the aisle hitting people over the head, the agent responded with, “Well, it’s been known to happen.”

So, there you have it. No cast iron skillets allowed as a carry-on item because it can and has been used as a weapon. Unless you get a TSA officer that allows it, in which case, it’s your lucky day!

I’m not sure it’s worth the risk.

But several people said they have done it and had no problems.

One TSO officer said that some agents are sticklers for the rules, but not him. He would let a person carry their cast iron pan on the plane.

Another TSO agent chimed in and said he was a stickler and, well, rules are rules for a reason.

So Do People Pack Them To Use On Vacation?

I read of one person who specifically said they took their cast iron skillet on the plane for cooking at the beach house they were staying at with friends.

Their friends laughed at them at first but changed their tune after trying a few meals prepared in the cast iron cookware. And now are often invited to join them on vacations.

And another person said they regularly flew to vacation at an Airbnb and always brought their own cast iron because the cookware provided was crappy.

But generally, when someone asks the question, it’s because they either purchased a cast iron pan while on vacation or they bought it as a gift.

Taking Your Cast Iron As a Carry-On

As you can see, people do fly with cast iron, and it’s a legitimate question to ask if you can carry it on with you. If you plan to check it, you are definitely safe in doing so. But what if you don’t want to check it?

Whether it’s the weight limit you are concerned with, or you don’t want to risk possible damage in a checked bag, please know the risks if you are going to try to bring it as a carry-on.

A TSA or TSO agent has the right to confiscate any cast iron skillets or let them through.

You will be at their mercy.

One person mentioned bringing a cast iron pan with them when they visited family. And another said they bought a pan to leave since they spent 90% of their vacations at the parent’s house.

Regularly taking vacations at a family member’s house, and leaving a cast iron pan there, makes sense. The pan is there, but you’re not actually traveling with it (except maybe the first time).

I may have to consider this. I think most of our vacations will now be at our son’s house because that is where our only granddaughter is. She is 22 hours away. We mostly fly, but sometimes we drive. It would be nothing to bring or buy a cast iron pan to leave there for when my husband or I do the cooking (which is usually breakfast).

But if we go somewhere else, I doubt I would ever consider bringing my own cast iron pan.

Although I have never been camping with cast iron, it’s because I didn’t use cast iron back when I did a lot of camping. If I were to do drive-in camping now, I definitely would bring my cast iron pan.

There are so many good recipes, pictures of bacon cooking over an open fire, and people talking about camping with their cast iron pan, that I don’t know how I missed it.

And now that I think of it, when I would go with one of my sons on a Boy Scout camping trip, they always made cobbler in a cast iron dutch oven.

In fact, Scouts has a whole cookbook dedicated to cast iron cooking. And not just cobbler.

But What About Walk-in or backcountry camping?

Does anyone pack a cast iron skillet in their backpack and then hike 10-20 miles up a mountain?

Yes, at least one group does. They have an annual backpacking trip in Yosemite backcountry. One person writes about it in, In Defense of Lugging a Cast Iron Skillet Into the Wilderness.

An Airbnb or Vacation Home

I read a Reddit post in r/castiron from a week ago titled, This is why I bring my own pan on vacation. Out of the 85 comments, about 11 people specifically said they brought their own cast iron pan when they went to an Airbnb or beach rental.

And three others were very happy to find well-maintained cast iron at their vacation place.

So you have a few people who bring their cast iron to cook in instead of using whatever the place supplies.

And there are a few who will use it if it’s there, but they didn’t travel with a pan from home.

My daughter is a travel nurse and often rents out an Airbnb for the length of her stay. When we went to visit her last place, she pointed out a cast iron pan to me. She had shoved it in the back because she didn’t know how to cook in it. But I was super excited. I pulled it out and used it every morning to cook breakfast.

And that’s just it. If you stay in a place that supplies cookware and you find a cast iron pan there, but you don’t use cast iron at home, you probably won’t use it. Like my daughter, she said she was afraid of ruining it or thought she had to wash it without soap, which absolutely didn’t appeal to her.

But, you can use soap on cast iron. I wrote about it in Cleaning Cast Iron Cookware – To Use Soap or Not.

Who else travels with a cast iron pan?

People travel on a plane with their cast iron pans, but if you want to take it as a carry-on, there is a risk of having it taken away from you. If you put your pan in checked baggage, you will have no problems (except maybe with weight, lol).

You found out that a few will travel with their cast iron to cook with while on vacation. But often when people are traveling by plane with cast iron, they purchased it on vacation or are flying with it as a gift.

Some people do bring their cast iron cookware with them when they travel to Airbnbs, beach houses, or rented cabins.

However, most people who travel with their cast iron are going camping and they intend to cook with it. They claim that there is nothing better than cooking in cast iron over an open fire.

Why do you travel with a cast iron pan? Let me know in the comments below.