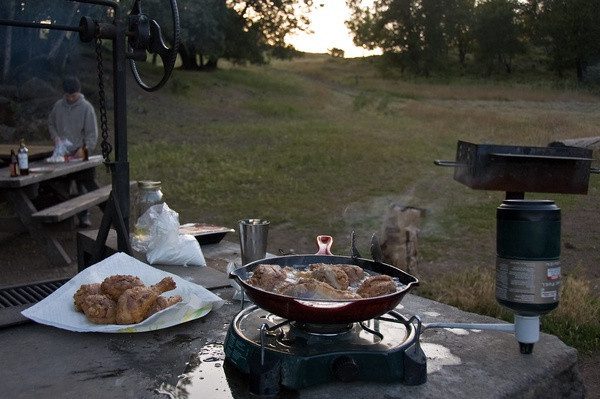 Are you getting ready to go somewhere and wondering, “How do I transport my cast iron pan?”

Whether you are going camping, flying on an airplane, or bringing a dish to a potluck, you’re unsure how to get your cast iron there safely.

Let’s face it…cast iron is heavy, so whatever you use must be able to handle some weight.

Not to worry; there are several options available to you.

Let’s find out what they are.

How Do I Transport My Cast Iron Pan?

Transporting cast iron can take some thought since you will need something sturdy. Many things around your house might work, such as a heavy-duty laundry basket or milk crate. In addition, you can get a carry bag specifically made for transporting cast iron. Or another option would be a collapsible basket. On the other hand, if you are packaging and shipping cast iron, you will need to pack it to not move inside the box. One way uses pool noodles.

1. Something You Already Have

Depending on where you are going and how you will get there, I’m sure you can find something in your house to use.

Here are a few ideas:

Heavy-duty laundry basket: whenever we would go camping, we always used totes and laundry baskets to pack our supplies. And even though I wasn’t using cast iron back then, I don’t see why it wouldn’t work.

Storage tote: the nice thing about using a tote is it has a lid. And many can handle quite a bit of weight. You may have something similar to the one in the photo, or you might prefer a clear tote if you have one. Just remember, if you’re transporting in a vehicle, make sure the cast iron won’t move around too much inside the tote.

Cooler: especially one on wheels will work well. If you are going camping or driving to an Airbnb, this option will save you from having to carry it if it’s heavy with several pieces.

Duffle Bag: if you are traveling on an airplane, a strong duffle bag or suitcase might be your best option. Just make sure you pack it well. You can use some of the ideas below in the cast iron cookware packaging video, or another option would be wrapping each piece in towels before putting it in the bag.

Milk Crate: this will work well if you go to a get-together and bring food with you. Though I don’t know if the skillet handle will fit in a square crate, a dutch oven will.

Whatever you use, you will want your cast iron to be packed in such a way that it won’t move around or rattle while you’re driving.

Do you have an idea you think will work?

2. In a Carry, Tote, Skillet or Storage Bag

They can go by many names, but basically, it’s a bag with a padded bottom the size of the cast iron pan, whether it be a skillet, dutch oven, or a griddle. They also make them for pie irons.

If you like the idea of having a bag designed for cast iron transport rather than using something you already have, a cast iron bag is a great option to consider.

You can click on cast iron bags to view some options on Amazon.

A third way to transport cast iron is with a collapsible carry basket.

They look somewhat like a picnic basket, and some are even called that.

And you can get them with or without lids.

However, you will need to consider if the basket is sturdy enough to hold your pan.

This option would be excellent if you are transporting food in your cast iron pan and not going very far.

And, even then, you will need to make sure it’s sitting snuggly in the basket so as not to move around.

One way would be to wrap it in a towel, especially if it’s something you want to keep warm.

If the idea of using a collapsible basket appeals to you, and you don’t already have one, click Collapsible Carrying Basket to see what’s available at Amazon.

Where Are You Going?

When trying to decide the best way to transport your cast iron, knowing where you are going may or may not limit your options.

Obviously, if you are flying on a plane, you won’t put your cast iron in a collapsible carry basket.

Of course, if you are only going a short distance with an empty cast iron pan, you can probably put it in the backseat on the floor and it will be fine.

Maybe you aren’t going anywhere, but your cast iron is.

And you are looking for tips on how to package it safely so it won’t get damaged in the shipping.

One popular way is to use pool noodles.

They are flexible, and you can cut pieces to fit around the edge of the pan. Additionally, you can cut the noodle to pack around the pan once you place it in the box.

The important thing to remember is you don’t want the pan to move around.

Watch the video below to view the unpacking of a cast iron pan shipped from Canada to the US. Toward the end, he gives a few more ideas for packing and shows a slide show of various ways others packaged their cast iron.

Some did well, and others didn’t.

So, hopefully, if you were asking, “How do I transport my cast iron pan?” you now have a better idea of how to do it.

You can use something you already have or purchase cast iron bags or a collapsible carry basket.

The main thing to consider is whatever you use has to be strong enough to hold the cast iron.

And once you have figured out what is strong enough, pack it tightly so there will be no movement in the journey.

Do you travel with your cast iron? How do you get there? And how much cast iron do you take?

How do you transport it?

Or have you ever shipped cast iron anywhere?

Let me know in the comments below. I would love to hear about your experiences with transporting or shipping cast iron.