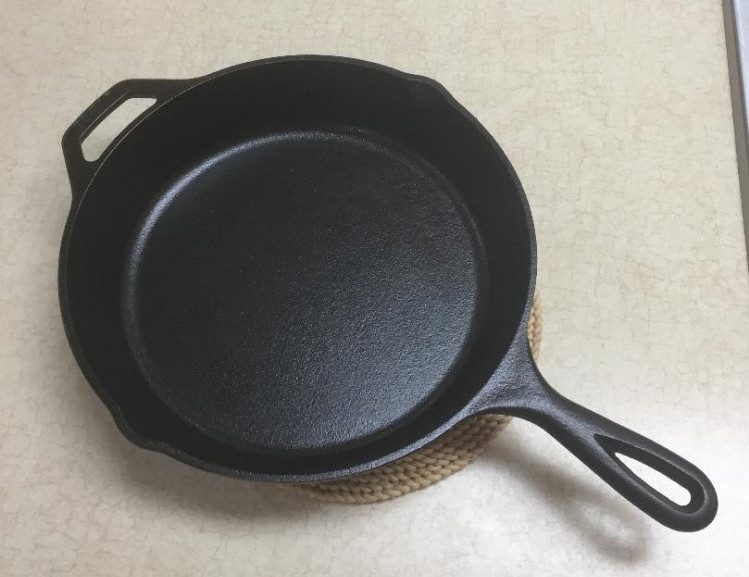 Who else is asking, “How many times should I season my cast iron?”

You probably already know about seasoning and that it’s necessary but that doesn’t mean you know how often you need to do it or how to know when it’s time.

As with many things about cast iron, the advice varies.

Since there are two ways to maintain the seasoning on your cast iron, it depends mainly on what you want to accomplish and the condition of your pan.

How Many Times Should I Season My Cast Iron?

There is no set amount of times you should season a cast iron pan. However, the pan needs a barrier to protect it from rust. When and how will depend on the condition of your pan when you begin. In addition, what you want to accomplish also plays into how many times you will want to season your cast iron. And since there are two ways to maintain seasoning, you first need to know what type you are doing.

What Kind of Seasoning Are You Talking About?

If you are asking about oven seasoning, it really depends on how you answer the following two questions.

But, if you are talking about seasoning in between uses, most recommend doing it after every use.

So how often should you season your pan?

As many times as you cook, clean, and dry it.

In other words, make it part of the cleaning routine.

In What Condition is Your Pan?

Is your cast iron new?

Or is it simply not performing like it used to?

If the answer to these questions is “No,” then you probably don’t need to season your cast iron.

On the other hand, if you said “Yes” to one of the questions, chances are it’s time to season your pan.

Seasoning in the oven causes the oil to chemically bond, or polymerize, to the iron.

This means a protective barrier is formed against rust, and with each coat, your pan becomes a little more nonstick.

Nonstick can happen gradually with use or by seasoning your pan in the oven multiple times.

My Pan is New

Most new cast iron cookware comes preseasoned, so seasoning is not necessary.

But many people do it anyway to get a more substantial nonstick base.

Or to fill in the pebbly surface.

In fact, some people recommend five or more cycles of seasoning to get rid of the pebbly surface.

While one way is to strip the seasoning off a new skillet and start fresh, another way is to add a layer of oil on top of the preseasoning.

But whether you strip it first, add more seasoning to the new pan, or don’t season at all is entirely up to you.

Preseasoned pans are meant to be used right away (well, after you wash it).

I Stripped the Pan Down

If you stripped a cast iron pan of its seasoning, whether you bought it at a garage sale or because of the pebbly surface of a new skillet, seasoning is a must.

When you strip a pan of its seasoning, it’s more susceptible to rust.

Therefore, you should not use the pan until you season it.

So, how many times should you season it?

At least once, but probably two or more times, depending on your end goal for the pan.

My Pan is No Longer Performing Well

If your pan is starting to stick, it is probably a good idea to add another layer of seasoning.

Some people say if you take care of a well-seasoned pan properly, sticking will never happen.

However, many factors could lead to stickage.

For example, cooking acidic food can break down your seasoning, and after a while (or right away), you might start to see certain foods begin to stick, such as eggs.

Or, some food leaves behind quite a mess and requires a bit more work to get it clean.

Additional scrubbing can wear away at the seasoning if it’s not the best in the first place.

In the case of sticking, you may only need to season your pan once.

But if the seasoning is patchy and you have to remove it, you will most likely want to season it more.

There is no set amount of times, though, that you should season to get the perfect pan.

What Do You Want to Accomplish?

There are several reasons why people season their pans.

I decided to season one of my Lodge skillets four times back to back to see if I could get rid of the pebbly surface.

Not because I was having problems with my food sticking or other poor performance reasons, but I wanted to see if having a smoother surface would make the pan more nonstick.

Here is what I did:

I will let you be the judge of whether you think I got rid of the pebbly surface or if I need to do more seasoning.

The thing is, if you use your pan all the time, you will achieve the same thing; it might just take a little longer.

Oven seasoning speeds up the process.

I hope you liked “How many times should I season my cast iron skillet?” and were able to find the answer you were seeking.

Well, it’s pretty straightforward if you wanted to know if you needed to season in between uses.

In that case, the answer is you need to do it every time you use your pan.

However, in regards to oven seasoning, it depends on the condition of your pan and what your goal is.

If you only want it to perform, you don’t need to season a new cast iron skillet at all if it came preseasoned. And most do these days.

If your pan is underperforming (food is sticking), and your goal is to have a nonstick surface, you should probably season your pan at least two times, maybe more.

And if you want your pebbly pan to be smooth, it might take nine or ten seasoning cycles.

You saw what mine looked like after four cycles.

Finally, if you stripped off the seasoning and start from scratch, it will take a minimum of one time, but I think you will want to do two or more to get a strong base.

What are your thoughts? Would you season more or less?

Let me know in the comments.