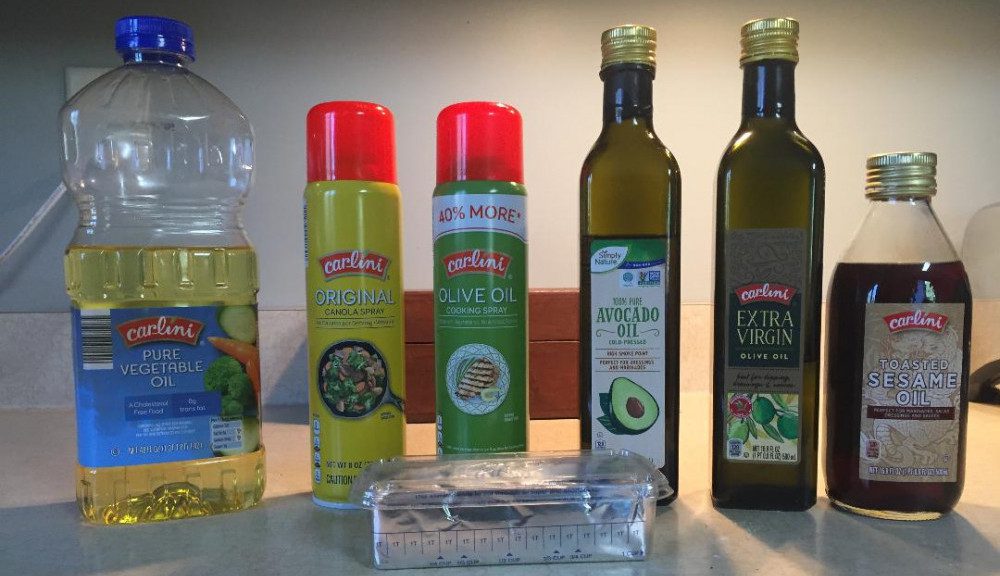 It is important to keep your cast iron pan seasoned, but is there only one way to do it? I have found at least five different ways. In this article, I will discuss each method and you can decide which one would work best for you.

Throw Your Pan in the Oven While Baking

You can season your pan by putting it in the oven while cooking something else, like pizza. You are not seasoning a pan you want to use right away, but one that will be ready for the next time you want to make something. Here are the steps:

I have not tried this way yet, but I want to try it soon. It sounds like it would do a better job of baking the oil into the pan than what I currently do which is oil my pan after I have washed and dried it.

The way I season bakes in the oil as I use it, but this method is similar to the seasoning you do when your pan is bare or when it is beginning to show rust. The main differences are the amount of time your pan is in the oven and the temperature you are using might not be the same.

Throwing your pan in the oven while baking something else sounds like a great way to preserve your pan and to kill two birds with one stone, as the saying goes.

Lodge Cast Iron pre-seasons their pans in the factory so it’s unnecessary to season your pan when you first get it. Of course, some people do, but that’s something different and for another article.

The easiest way to season your pan is to cook with it. This way is how I season it and the way Lodge Cast Iron recommends for maintaining your pan. Every time you cook, you potentially add another layer of oil to the pan which protects the pan 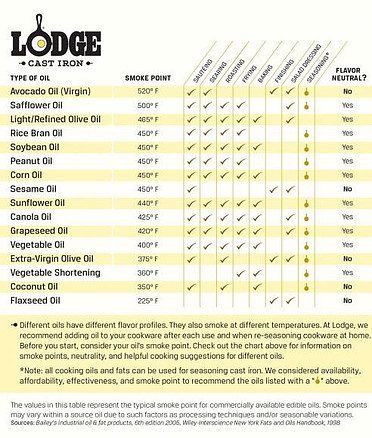 and makes it nonstick.

I said potentially because acidic foods will remove the seasoning rather than add a layer, so be aware of this fact.

Here are the two steps I use and what Lodge Cast Iron says to do:

Although I don’t use the canola cooking spray made by Lodge Cast Iron, I do use canola oil that I buy at the store. However, I’m sure what they make is better than what I use, so if that matters to you, and you want something potentially better, know that Lodge Cast Iron does offer their own cooking spray.

I like this chart because it helps you know the strengths and weaknesses of different oils. It is an excellent chart to keep on hand if you use your cast iron for various uses. And even if you don’t have a large selection of oils on hand, this chart will help you with what you do have.

Oil Your Pan While It is Still Warm

This method is a cross between what Lodge Cast Iron recommends and the oven method I talked about initially. It is pretty simple. I usually wait for the pan to cool down, but this way will have you do everything in a warm pan.

Many people recommend drying your cast iron cookware on the stove so it will be bone dry and leave no residue from using a paper towel. I have not tried this method but I think it sounds like a good way and one I might try in the future. I admit the paper towel does leave a residue sometimes. But I’m also not sure how to avoid the paper towel even if I use heat. 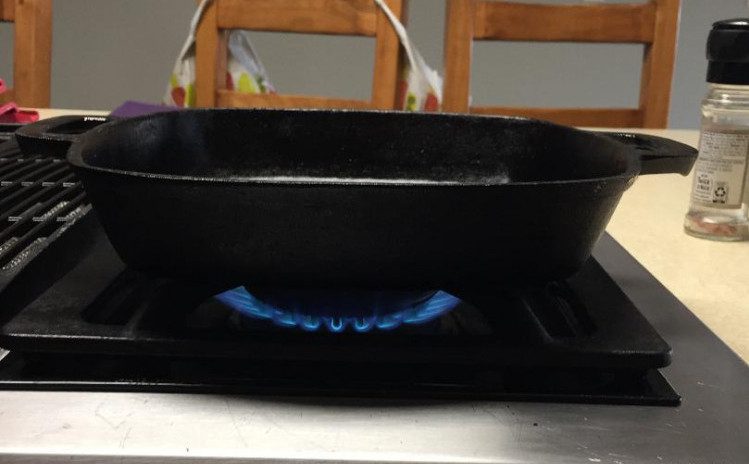 Another Way to Season Your Pan Using the Stove

I find it interesting the different ways that others recommend. All involve oil at some point in the process, but some include heat as well. For example, here is another method I found using heat.  Epicurious, an American digital brand that focuses on food and food-related topics, recommends this method.

This method is a little more time-consuming than the other methods and may not work as well for you. But if you have the time, I think it sounds like a good way to season your pan.

One caution, though; if you look back at the chart from Lodge Cast Iron, you won’t see bacon grease. That doesn’t mean you can’t use it, but if you want to know things like its smoke point temperature, if it is or isn’t flavor neutral, or what ways to cook with bacon grease as your seasoning, you won’t find it on this chart.

Lodge Cast Iron also doesn’t recommend using lard unless you use your pan regularly. It can become rancid if it sits too long unused. So that would be true of bacon grease as well. What do you think?

I use bacon grease every morning to cook my eggs, but I do not use it as a seasoning between uses. If I had to guess, I would say it isn’t flavor-neutral, but it sure makes our eggs taste good.

I have shown you four ways to keep your cast iron pan seasoned between uses, and I hope you have found them helpful. You can throw it in the oven while you are making something else, or simply add a thin layer of oil after your pan is dry. You can use your stove-top to dry your pan or to cook in the oil after applying it. Or you can just let it cook in the next time you use your pan. It’s up to you.

The important thing to remember is that seasoning your pan between uses is the best way to protect your cast iron from rust and help make it nonstick.

I would love to hear how you season your pan. Or if one of the ways above sounds intriguing and you plan to try it. Do you use heat to dry or season your pan or just put some oil in it with a cloth or paper towel? Please leave any comments below.