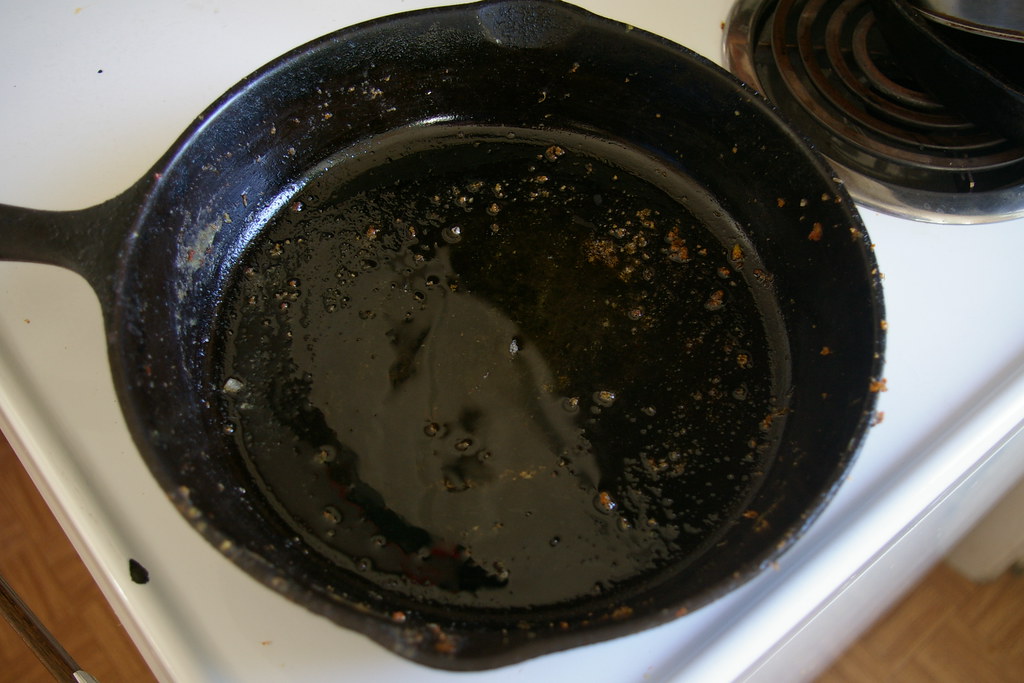 Have you heard cleaning cast iron is too much work? Has it kept you from even wanting to give cast iron a try?

Well today, I want to tell you that cleaning cast iron cookware is not hard. Yes, there are a couple of extra steps compared to using a dishwasher, but it will quickly become routine.

However, if you are the type that can’t stand the thought of cleaning your pan until later, then you might still think cleaning cast iron is too much work even after reading about it.

When I first started using cast iron, I had one 10-inch square cast iron skillet that I bought in the camping section at a hardware store.

First, I had to learn how to season it, but then I needed to know how to clean it properly. That’s because cast iron isn’t like every other piece of cookware.

It lasts a lifetime with proper care.

And even if you have an old pan that wasn’t taken care of, you can restore it.

But let’s get back to cleaning.

Cleaning your cast iron must be done the right way. That means three things: washing it by hand (even using soap occasionally as needed), drying it thoroughly, and adding a thin coat of oil to the skillet for protection. Doing it the wrong way won’t ruin your skillet, but it will make it more difficult to cook with. And the clean-up will be harder. Or your pan could get rusty and require even more work to restore.

To use soap or not…that is the ongoing debate.

Many people still do not use soap to wash their cast iron cookware. They will give you several reasons why you shouldn’t. But others will tell you it’s fine; it hasn’t hurt their cast iron at all.

I haven’t been using cast iron for decades as some people have, but I have done my research. According to Lodge, a huge name in cast iron cookware, using a little soap is okay when needed.

Every morning my husband and I make bacon and eggs in our cast iron skillet. We think the food tastes better than using another type of pan. So when we finish our breakfast, we have a cast iron pan to wash.

When I first started using cast iron, I didn’t know anything. I had to learn.

Fortunately, it didn’t take long. I’ll tell you how I do it after making our breakfast.

While we eat, the pan is cooling down a bit. Then I follow these steps:

Having a scraper makes it so much easier, but you can still clean your pan without one. Simply use your spatula to scrape out the bits of food that are left, wipe the pan out with a paper towel, or just rinse the food off into the sink if it’s not stuck.

When the Food is Stuck

If the food is stuck even after using a scraper, you can either heat some water in the pan to loosen the food, remove it with kosher salt, or use chainmail. Chainmail is a tool (small metal rings linked together to form a mesh) made for getting off food that’s stuck in your cast iron.

Using water is not bad at all. In fact, not using water would make it pretty hard to get your pan clean. It’s letting your pan sit in water that can be bad.

Using soap is fine as I stated above. Maybe you have heard that using soap ruins the seasoning in the pan, but I haven’t found that to be true. Well, perhaps it would be true if you soaked your pan in soapy water, but that is never recommended, so don’t do it.

And the brush is important because it keeps the seasoning from being washed off, whereas scrubbing with a dishcloth is more likely to take off the seasoning. Anyway, Lodge recommends using a brush.

One more thing, I follow the same steps of washing regardless of what I have made in my cast iron. Not all cooking will require a scraper, so I only use that when there is food to scrape out, but otherwise, it’s the same.

Drying your cast iron pan immediately after washing it is a necessary step.

Leaving it to air dry can cause your pan to rust because iron plus water plus air causes a chemical reaction that results in rust. To keep this from happening, you should always dry your cast iron pan right away.

Use a paper towel or a lint-free cloth. Dry it thoroughly but not vigorously. Don’t be surprised if a little of the seasoning comes off on your towel. It will be dark reddish-brown, and not unusual.

Others put it on the burner for a few minutes for even more thorough drying. This is what I do after drying my skillet with a lint-free towel.

Oiling is a form of seasoning. When you cook your food, some of the oil bakes into the cast iron making it more and more nonstick over time.

Washing and drying may remove any oil that hasn’t bonded to the iron, but as I said, that is normal. It’s not washing away the seasoning because seasoning is the oil that is baked in (or bonded). However, it does make the oiling step that much more important.

You can oil your pan using a cooking spray or cooking oil. Or you may prefer Crisco or some other type of fat. Pretty much any fat or oil will do.

I generally only coat the cooking surface and around the sides. And sometimes the bottom of the pan.

Make sure you wipe off any excess oil or fat. Your pan should look almost dry, not oily.

As you can see, cleaning your cast iron cookware is not that difficult. You just follow the three steps of washing, drying, and oiling, and you are good to go.

I don’t like to spend a lot of time washing dishes or with clean-up. So, I probably would have stopped using cast iron by not if it were too much work.

Instead, it’s become routine and I find it very much worth it.

How about you? Do you think cleaning cast iron sounds like too much work?

If you are having trouble getting your cast iron clean and would like to know more about chainmail, check out my review.