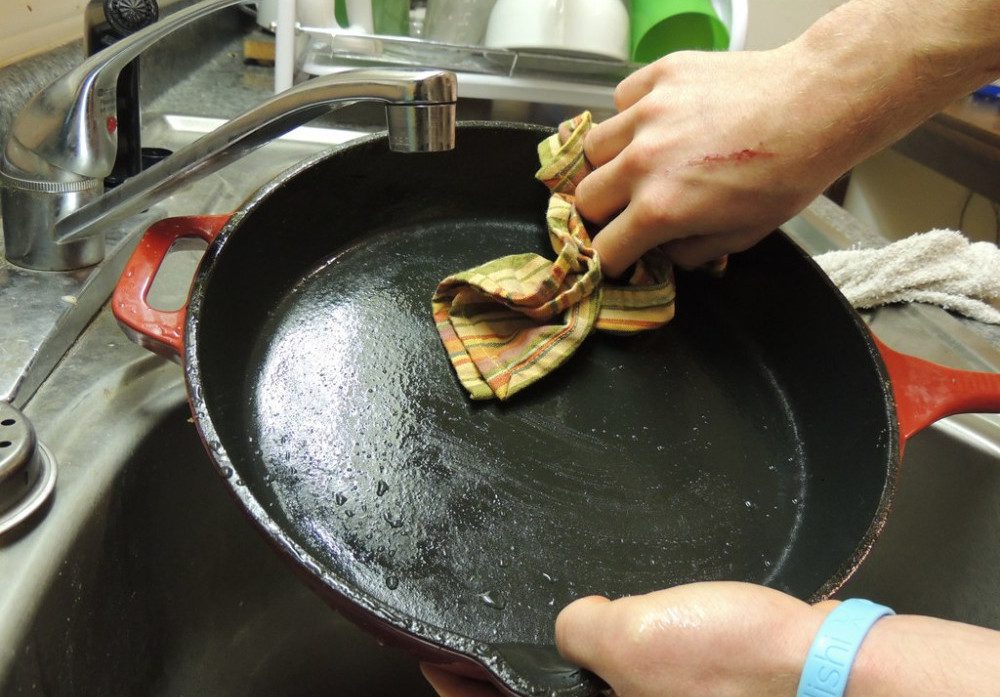 Do you want to know, “How does cast iron get clean without soap?”

Fortunately, many people now say it’s okay to use soap.

However, there are still many people who never use soap because that’s what they were taught or heard.

What are the thoughts behind not using soap, and are there ways to still have a clean cast iron pan?

How Does Cast Iron Get Clean Without Soap?

The debate over whether you can use soap or not on cast iron is real. However, the argument is over what it does to the seasoning, not on whether you need soap to get your pan clean or not. The truth is you do not need soap to clean your cast iron. In fact, soap doesn’t actually sanitize or kill bacteria; it is merely a way of lifting the food and oil so the water can wash it away. But that doesn’t mean you can’t use soap because the soap we use today will not harm the seasoning.

1. Soap is Bad, and You Should Never Use It.

The first train of thought is from those who never use soap.

They say it’s not necessary for cleaning or making cast iron sanitary.

Furthermore, they contend that soap ruins the seasoning by eating away at the polymerized oil.

A few say that you don’t even need water to get your pan clean.

But most agree that water for a short time is okay.

So, what do they say makes cast clean and safe to use?

Well, cleaning means using water and a scraper, chainmail, or scrubber, or no water and kosher salt (see video below for a demonstration of this method).

As far as what makes the cast iron safe, it’s the heat. A pan that reaches 300° will kill any bacteria.

In other words, as long as you preheat your pan for several minutes before adding food, you won’t have to worry about sanitization. The heat will do that.

But what if you don’t preheat your cast iron? For example, something that is going in the oven often starts with a room temperature pan.

Well, in that case, many recommend heating your pan after cleaning and before adding a thin layer of oil.

In that way, it will be sanitary for the next time you use it.

Fortunately, it is true. When the heat reaches 300°, it kills bacteria.

And for the most part, heat is a part of using cast iron.

Whether you heat your pan after cleaning or before cooking, you will have a sanitized pan.

And if you do it after cleaning, you won’t have to worry about starting with an unheated pan the next time you cook.

Cleaning Your Cast Iron Skillet? Don’t Use Soap and Water

2. You Can Use Soap But It’s Not Necessary

This thought is the way many people look at it.

And this is what Lodge Cast Iron implies (see video below).

It’s also what they say on their website: “Soap isn’t necessary, but you can use mild dish soap to clean cast iron. The seasoning on Lodge cast iron is fairly resilient and can withstand a little bit of soap, water, and a good scrub with a brush.”

Therefore soap is acceptable to use but not necessary.

If heat will do the work of sanitizing, why waste soap?

In addition, soap will not ruin the polymerized seasoning because it’s been baked in and bonded to the iron.

In the past, and before modern-day dish detergent, soap contained lye.

And lye will damage your seasoning.

However, dish detergent is mild enough now not to harm the cast iron seasoning.

So, if using soap makes you feel better, or you want to use soap as a way to get the food particles and oil off, then, by all means, use soap.

But know this: most of the time a well-seasoned pan is easy to clean with just water and a scraper, scrubber, or chainmail.

How to Clean a Cast Iron Skillet

3. Of Course You Can and Should Use Soap

I found several people who said you could use soap, but not too many said it was necessary or even that you should.

“Whoever tells you you can’t wash cast iron with soap is either a hipster who just found cast iron or an old timer that has been very careful to never do it, and doesn’t know it’s completely harmless.”

And while it’s true that there is no reason to avoid soap (because it can’t remove or damage seasoning), are there actual benefits to using soap?

Well, yes. But not in the way you might think.

I found this statement from Insider about the role of dish soap interesting:

“Dish soap’s main function is to get grease and food residue off of your dishes. However, dish soap is quite effective at washing germs and viruses off of your dishes too, says Joy Phillips, PhD, research assistant and professor of immunology at San Diego State University. Like hand soap, dish soap does not kill bacteria, but it lifts them off surfaces so that they can be washed away by water.”

So, a benefit to using soap, in this case, would be to lift the grease and food particles off the surface so the water can carry it away.

But dish soap doesn’t itself sanitize or kill bacteria.

That puts a whole new spin on the necessity of soap.

Can You Use Soap on Cast Iron???

How does cast iron get clean without soap?

Well, hopefully, you now have a better understanding of how different people answer this question.

And maybe it has helped you decide what way will work best for you to clean as well as sanitize your cast iron.

If you are in the no soap camp, you say all you need is water and a scraper or other tool to get your cast iron clean, and heat will do the work of sanitizing.

The second group says soap is fine but unnecessary. They, too, often clean without soap and rely on heat to kill any bacteria that might be on the surface.

Finally, those who say they use soap mostly do so because they can; and like using soap.

I’m sure some think it is the only way to make sure your cast iron gets clean.

But if you think the soap sanitizes, or can’t get your pan clean without it, you learned that isn’t the case.

Soap doesn’t sanitize or kill bacteria; it only lifts the food and oils in the pan so the water can wash it away.

I, personally, thought soap did the cleaning and it was best to use it, but now I am moving to the second group and saying soap is okay to use, but not necessary.

Do you use soap when cleaning your cast iron?

Why or why not?