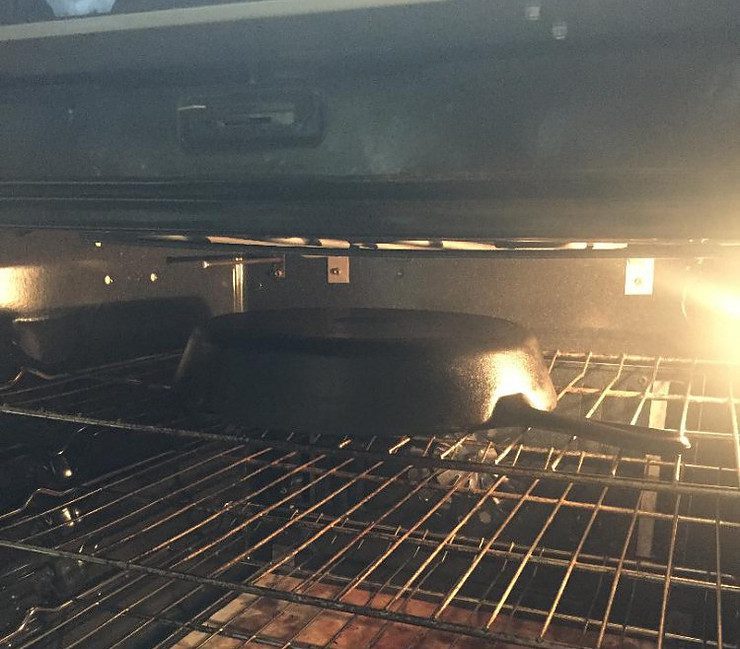 Have you ever wondered, “Why do I need to cool cast iron in the oven after seasoning?”

At first, you may think it’s simply part of the process.

By this, I mean your pan isn’t entirely seasoned until it’s no longer hot.

So, in effect, you cool your cast iron in the oven because it’s necessary.

However, this doesn’t answer the question as to why.

Allow me to explain what’s going on.

Why Do I Need to Cool Cast Iron in the Oven After Seasoning?

First of all, you do not need to cool cast iron in the oven after seasoning. There are several reasons why you might want to, though. The number one reason is safety. Your pan has just been in the oven at a high temperature for an hour. Another thing to keep in mind is residual heat allows the oil to keep bonding to the surface a bit longer. In addition, by letting your cast iron cool in the oven, you won’t have to worry about the sudden temperature change potentially damaging the seasoning.

Conventional wisdom tells you it’s safer to remove a cooled cast iron pan from the oven than a hot pan.

That may be true, but is it really unsafe to remove hot cast iron from the oven?

I mean, what about when you cook food in the oven?

Don’t you have to remove your pan while it’s hot?

Of course, you do.

So, I’m not sure I understand this logic.

On the other hand, leaving your pan in the oven until it’s no longer hot is easier unless you need use it.

But, if there is no compelling reason to remove the cast iron while it’s still hot, why not just leave it until it’s cool?

And, although this is the most popular reason for letting your pan cool first, it is rather flimsy, in my opinion.

In other words, it might be safer to remove a cooled cast iron pan from the oven than a hot one, but I’m not sure that in itself makes it a necessary reason.

When you let your pan cool in the oven, there is indeed a period the cast iron is still seasoning.

But most agree, you don’t need the additional time because the hour your cast iron spent in the oven was enough time for the pan to polymerize or bond the oil to the surface.

So, while there isn’t anything wrong with letting it season a bit longer while it’s cooling, I don’t see that as a justifiable reason for saying you need to cool cast iron in the oven after seasoning.

When I first heard this reason, I questioned it until I read the explanation.

I wasn’t sure how removing a hot empty cast iron skillet from the oven differs from taking out a hot pan with food.

However, this person explained that the oil and the metal have “different coefficients of thermal expansion”; therefore, a sudden temperature change could lead to the seasoning peeling off before the oil completely bonds to the metal.

This reason sounds quite scientific, which means there is probably something to it.

And I’m guessing that means there is a difference between removing a hot empty pan that has been seasoning and a hot pan full of food that has been cooking.

Back to Back Seasoning

What if you want to do back to back seasoning so you can get the black patina faster?

Or more quickly smooth out your pan that came bumpy?

Because one single oven seasoning won’t do that.

In fact, some say it takes years through regular cooking to achieve the desired glossy surface.

And that’s why many people choose to do back-to-back seasonings.

In that case, is it okay to put additional layers of oil on a hot pan?

Most people say yes, but a few say to wait until the pan cools a little, so you don’t burn yourself.

Furthermore, there is more involved than just removing the cast iron; you now have to add another layer of oil.

And that means more opportunities for getting burned.

What I found interesting is that letting the pan cool first plays no part in the actual seasoning or polymerizing of the cast iron.

Safety is the only consideration.

To be sure, you need to be careful when working with a hot pan, but here is the way one person explains how they do it:

This person also did six back-to-back seasonings with no problems.

To be safe, though, if you do multiple seasonings in a row, you might want to let your cast iron cool in the oven after the last go-around, especially if there is no reason to take the pan out.

That way, you can avoid any of the seasoning peeling from rapid temperature change, and your cast iron will have that last few minutes of heat to complete the polymerization.

How to Season Cast Iron the Right Way

So, if you were asking why I need to cool cast iron in the oven after seasoning, you, hopefully, now understand why it’s necessary or not.

Although safety was the reason most given, many don’t think removing a hot pan from the oven is that big of a deal.

Others thought the cast iron needed the cooling process to ensure the seasoning had as much time to polymerize as possible.

And one person gave what sounded like a scientific answer (though they didn’t claim to be a scientist), saying that rapid temperature change could cause the seasoning to peel.

One thing is for sure: your pan is hot when the hour of seasoning is up, and you turn the oven off.

What do you do?

Do you leave your pan in the oven to cool or take it out?

Why do you do it that way?