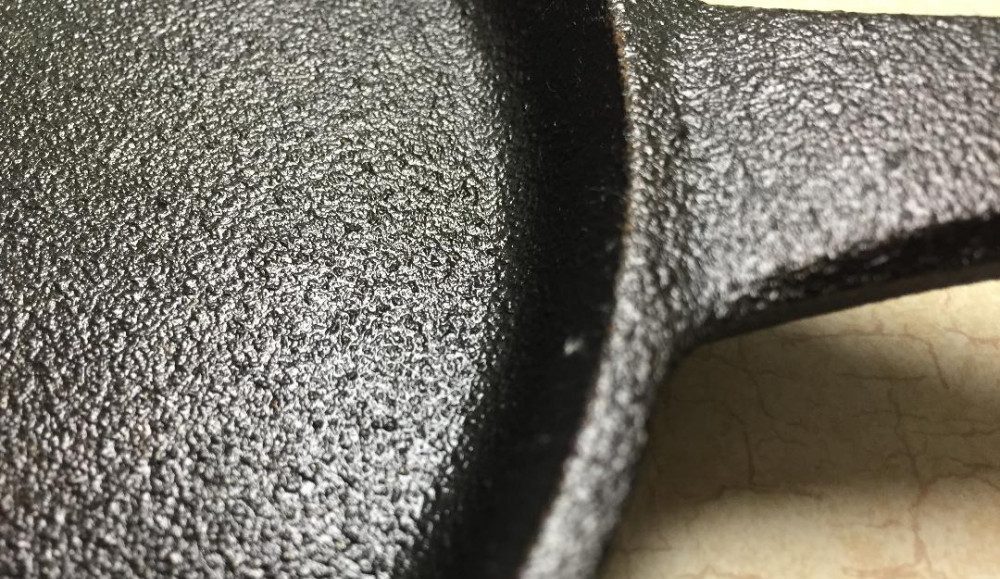 Why is my cast iron skillet bumpy?

That’s a question I asked myself not too long ago.

If you are at all familiar with vintage cast iron, you know it’s smooth.

Was it always smooth, or did it get that way over time through seasoning and much use?

The debate is real and ongoing, and you may have your own opinion.

Or maybe you just want to know why cast iron is bumpy.

Regardless of why you asked the question, let’s find out the answer now.

Why Is My Cast Iron Skillet Bumpy?

The simple answer to that question is because cast iron is cast in a sand mold. All cast iron began as molten iron poured into a mold made of sand. Whether it was cast in the 1800s or yesterday, every manufacturer used sand molds. Sand molds create bumps. In other words, cast iron always comes out of the mold bumpy from the sand indentation. But in the past, manufacturers included a machining step that smoothed out the bumps that most don’t do anymore. Therefore, the newer cast iron is bumpy.

Should Cast Iron Be Smooth or Bumpy?

That is a good question and one many people debate.

Those who advocate for smooth say its nonstick properties are far better than rough cast iron.

And those who like textured better will tell you having bumps is much better for seasoning.

Unfortunately, neither of those reasons tell us which is better.

While smooth may be more difficult to get a good seasoning, does it need the seasoning to make it nonstick? No, it doesn’t.

And if bumpy cast iron is easier to season, does it need to be nonstick without seasoning? Again, the answer is no.

Do you see where I am going with the logic?

Smooth cast iron has advantages that bumpy doesn’t have or need and vice versa.

Another word for machining is polishing, and I was curious as to why cast iron manufacturers quit making smooth, polished cast iron and opted to leave it rough.

At first, I thought it was because of time and expense. And maybe that does play into it because the machining step is both time-consuming and expensive.

But to hear it from Lodge, that is not the reason they give. Lodge made a conscious decision to keep their pans textured as it “allows the oils to adhere to the skillets cooking surface during the foundry seasoning and later when the user cooks on it and maintains it at home.”

Lodge used to make smooth cast iron cookware but discontinued it in 1998 due to poor sales. People wanted the textured because they liked that it was easier to build up the seasoning.

Or did they like that they could either get a preseasoned textured pan instead of an unseasoned smooth pan?

No, because Lodge didn’t even offer preseasoning until 2002.

There are still a few manufacturers out there who sell the polished, smooth cast iron, but you will pay much more for one of their skillets.

Butter Pat Industries is one example of a manufacturer that still includes the machining process in their production.

Beware though, at Butter Pat Industries, a 12-Inch skillet costs ten times more than a Lodge 12-Inch skillet. But, for that amount of money, you will get a beautifully polished, smooth surface.

“The smoothness of our pans is what releases the food from the surface of the pan, not the seasoning. The only reason to season a pan is to prevent rust,” says founder Dan Powel.

Powel believed that people still wanted smooth pans, cast thinner and lighter weight like they were 100 years ago, so he opened his own business.

Butter Pat Industries probably caters more to professional chefs than to the average person cooking with cast iron in their kitchen.

Because, the fact is, Lodge is more affordable for most people so, even if someone wants a smooth pan, they are likely to buy a Lodge (or other more reasonably priced cast iron pan) and do their own seasoning to make it smooth.

Or look for vintage pans to restore.

How Do You Smooth Out a New Cast Iron Skillet?

You basically have two choices: you can sand the bumps down or you can continue seasoning your pan in the oven and/or through cooking until all the pores are filled in.

If you choose to season, the process for getting a smooth surface will take longer, no doubt, but there is little risk.

If this is the way you want to go and would like to know more about seasoning, check out my article on Seasoning Your Cast Iron Skillet.

On the other hand, if you want your pan smooth now, and you think you’d like to try your hand at sanding, there are many videos that can show you how.

I believe the guy in the video removes the seasoning first which some say is not necessary. So keep that in mind if you decide to sand your pan.

Also, keep in mind a couple of risks that come with sanding. If you sand down too far and take off more than just the textured part of the iron, you could make your pan:

But many, many people have done it successfully.

If you’re still thinking about whether you want your pan smooth, you might want to check out Why Would I Want My Cast Iron Smooth?

If you were asking, “Why is my cast iron skillet bumpy?” I trust you now have a better understanding of why.

The main reason is that cast iron is made in a sand mold. And the sand leaves a texture when the pan is removed.

In the past, the manufacturer took the time to smooth out the pan, but today that step has been eliminated.

The reasons for no longer going through this step will vary depending on who you ask.

There is nothing wrong with having a bumpy pan; there are even some advantages, but there will always be people who prefer smooth, and that’s okay too.

Do you have a preference?

4 thoughts on “Why Is My Cast Iron Skillet Bumpy – And Does It Matter?”