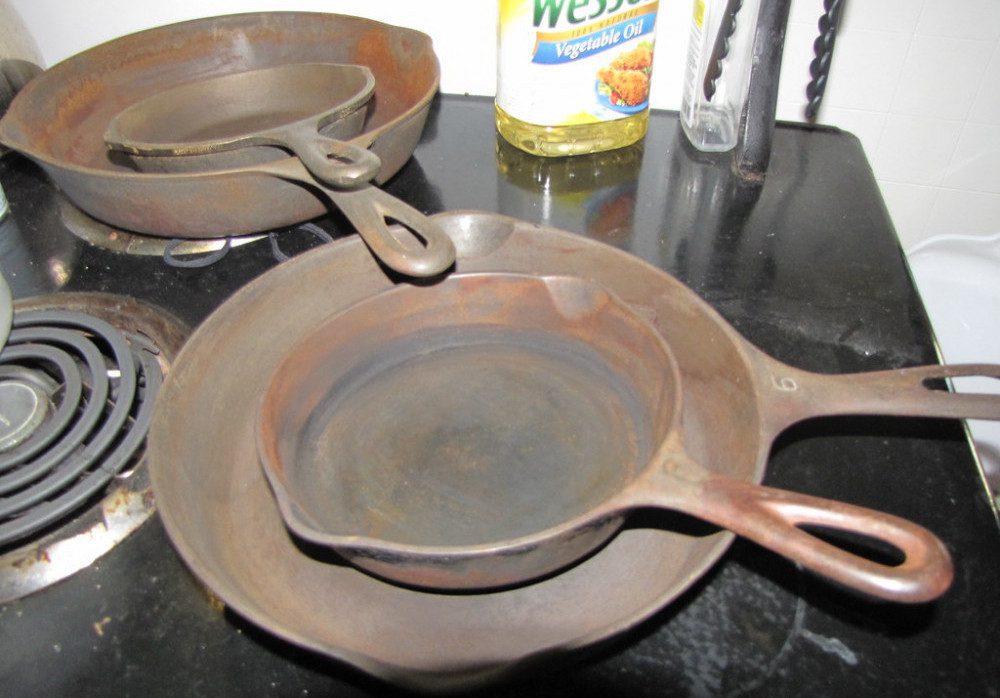 Here’s a question that not everyone knows the answer to, “What does water do to cast iron?”

And if you don’t know, you will probably do one of the things you shouldn’t do.

For example, people who stay in vacation rentals and use cast iron cookware, if provided, will usually treat it like any other cookware they use at home.

And if they don’t have cast iron at home, they won’t know the damaging effects water can have.

As a result, they might “ruin” it or, more accurately, damage it.

So what are these damaging effects water can have, and how can you avoid them?

What Does Water Do to Cast Iron?

The simple answer is prolonged exposure to water or moisture causes cast iron to rust. Rust is another name for iron oxide and is the physical breakdown of the surface metal. Since rust isn’t safe to consume, you should remove the rust and reseason the pan before using it again if you find it on your cast iron.

1. Do Not Put Cast Iron in the Dishwasher

Putting your cast iron pan in the dishwasher is a bad idea. The chemicals in the soap and the amount of time your pan is in the water will deteriorate the seasoning and cause the pan to rust.

But that doesn’t mean you have ruined your pan.

What it does mean, though, is you will have to clean the rust off, probably with steel wool or a metal scouring pad, and reseason it.

When you find some food stuck to the pan after cooking, it is tempting to soak it for a while.

The only problem is, if you leave it soaking too long, it will have a similar effect as putting it in the dishwasher.

Soaking will affect the seasoning, especially on a newer pan that hasn’t had time to build up a good, solid base.

A better way is to run the pan under hot water while it is still hot, or if the pan has cooled, go ahead and heat it back up.

The trick is using hot water on a hot pan to release the stuck-on particles of food.

Then you can use a scraper to remove the food and wash as usual.

Another way is to add some coarse salt and lightly scrub with a sponge or cloth. Or some people use chainmail.

Boiling a few inches of water for a few minutes is one way many people clean their cast iron pans.

And there is nothing wrong with this method.

However, that doesn’t mean all boiling is a good idea.

For example, boiling pasta or a pot of beans is unwise because twenty minutes of boiling is too much.

The longer the water is boiling, the more likely the seasoning in your pan is to release, forming flakes that will get in the food.

Although the flakes aren’t harmful in any way, they aren’t attractive, and most people want to avoid them.

Plus, it’s your seasoning, and you want to keep it on the pan.

Letting your cast iron air dry doesn’t always cause rust to form, especially if your pan is well-seasoned.

However, it will weaken the seasoning.

And if you continue to air dry it every time, it’s likely to form rust and ruin the seasoning.

Or, if your pan is new or unseasoned, it is sure to rust wherever the water hits the iron.

So, as a general rule, those who use cast iron always recommend drying your pan immediately.

In fact, many put their cast iron over a flame for a few minutes to ensure no hint of water or moisture remains.

I heard one person say they had never heard of rust forming on a dry pan.

Also, drying your pan on the stovetop is an excellent way to begin seasoning.

You simply add a thin layer of oil to the warm pan and let it heat past the smoke point for a couple of minutes to polymerize or bake the oil into the pan’s surface.

5. Avoid Storing Your Cast Iron in a Damp Area

Anywhere iron is exposed to moisture and oxygen, rust will be the result.

It doesn’t matter if it’s water or humidity; the iron will react.

Therefore, keep that in mind when you are storing your pans.

Moisture can be in a cabinet near the dishwasher or an open shelf in a humid area. Outside or a damp basement can also be risky places to store your cast iron cookware.

But if you use your pans regularly and continue to season them in between uses, you will be fine.

I’m primarily referring to pans that don’t get used but are stored in a moisture-filled environment.

In that case, you can expect some rust.

Most rust is on the surface and easily remedied.

But when you see the rust flaking, it’s because more rust has formed underneath.

And if left unchecked, rust will continue to eat away at the metal.

The combustion reaction is similar to a fire (only much slower).

Have you ever seen an old cast iron pan completely covered in rust?

Even when all you see is rust, the pan isn’t ruined. You can restore it.

How to Restore Rusty Cast Iron

As you can see, cast iron doesn’t like water or moisture (or fire).

What does water do to cast iron?

To keep your cast iron from getting rust, avoid the following five things:

It isn’t ruined if you find rust on a cast iron pan, but it will require some work.

Depending on the amount of rust, it will either be an easy fix or a more time-consuming one.

An easy fix is using steel wool or chainmail to remove the surface rust and then reseason it.

A more time-consuming fix will require additional work, such as sanding or soaking in a vinegar-water solution. And will be for a pan that is covered in rust and may even be flaking off.

In that case, you may decide it’s not worth it and choose to replace the pan instead.

I’ll just mention here that some people love restoring all types of cast iron back to their former beauty.

But if that isn’t you, you might want to check out my Which Size Cast Iron Skillet Should I Get? – 5 Pans to Consider