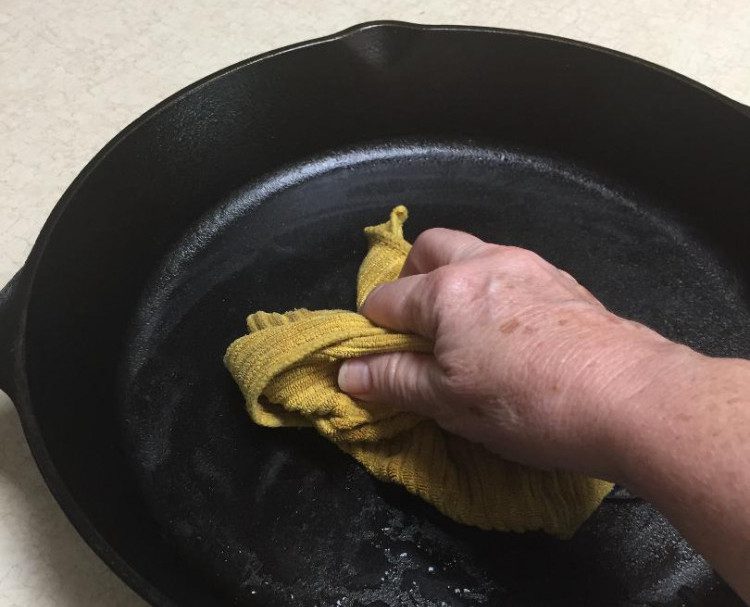 Have you ever wanted to know, “Why does cast iron need to be dry?”

It may seem strange because other cookware can stay wet.

For example, you can soak Teflon or put stainless steel in the dishwasher. You can also leave them to air dry.

Furthermore, doesn’t the seasoning protect the iron from coming in contact with water?

In fact, that is one of the reasons why we season our pans.

But, as it turns out, seasoning should also be dry.

So, it is vital to learn why cast iron needs to be dry and find an effective way to do it.

I will explain this reason further, plus give you three proven ways to dry your cast iron.

Why Does Cast Iron Need to Be Dry?

There is one main reason cast iron needs to be dry, and that’s because iron is highly susceptible to rusting when exposed to oxygen and water. You can’t keep your pan from coming in contact with the air, but you can make sure it isn’t wet for too long. One way is to dry it, and another way is to season it. However, seasoning also needs to be dry, so you can’t depend on this way alone to protect your cast iron from rust. In other words, you can’t leave a seasoned cast iron pan wet either. Drying it is essential. Fortunately, drying isn’t hard. There are several ways people think are best: with a lint-free towel, on the stovetop, or in the oven.

You can’t leave your cast iron pans wet because you don’t want them to rust.

Seasoning is one of the ways to protect your cast iron from rust. But water (and especially water combined with chemicals in the detergent) will degrade the seasoning if exposed to it for too long.

Therefore, you should not leave your seasoned cast iron pans to soak, air dry, or go in the dishwasher.

You probably shouldn’t boil water for a long time, either. However, short periods are okay.

As long as you dry and season your pan afterward.

Even damp air affects the seasoning if the pan goes unused for a long time.

That’s why you might come across rusty cast iron cookware in a thrift store or yard sale.

Maybe it was exposed to water, or perhaps it was just packed away in a damp basement and never used.

In other words, you should use your pans if you want to keep the seasoning intact.

But what about drying? Is there a best way, or does it matter how it gets dry?

I’m not sure it matters a whole lot, but I found three ways that most people will use to dry their cast iron.

And maybe, people who use these ways think their way is the best.

RELATED > > > > Why Can’t I Put My Cast Iron in the Dishwasher? – Two Reasons to Consider

1. Use a Lint-free Towel

And the quickest, in my opinion.

Some people will tell you not to use a paper towel because it can transfer lint. And while that is true for a pebbly surface, I don’t see this as a problem with a well-seasoned, smooth skillet.

Unless, of course, you scrub it dry.

I do use half of a paper towel (or a quarter of a full one) to season, but not to dry. Drying requires a little more pressure. And to be honest, I don’t want the expense.

My family teases me about how stingy I am with paper towels.

Therefore, I use some of my older Norwex cloths for drying. Although I recently read that bandanas or old t-shirts work well.

Most importantly, though, is to get the pan completely dry with no moisture and not leave behind any lint.

Another method a lot of people recommend is to dry your cast iron on the stovetop.

They say it ensures you get rid of any hint of moisture that might be left behind even after drying.

Most people still dry their pan first with a towel (preferably lint-free), but maybe not as thoroughly as they would if they didn’t immediately put it on the stovetop to heat.

Advice ranges from letting the pan sit on the burner over medium heat for 3-5 minutes to low heat for several minutes.

One person even recommended longer.

Faith Durand from The Kitchn says about drying on the stovetop, “I find that this method of drying is more thorough and quicker, and it also seems to preserve and even maintain the seasoning on my skillet better.”

Regardless of how long you leave your pan to heat, you will at the very least be getting it dry.

According to those who do it this way, a hot pan is also a better way to season.

And that is most likely what they have in mind when saying to heat longer.

I dry my pan this way sometimes, but not always, or even primarily.

But I do like the idea of combining it with seasoning to let the heat adhere the oil to the surface of the pan. Of course, this type of seasoning isn’t as effective as oven seasoning, where the oil bakes past the smoke point for up to an hour.

Still, it is better than oiling a room-temperature pan.

How to season and Maintain a Cast Iron Skillet

This method is the least likely way to dry your cast iron.

Those who recommend it say it dries the pan better than the stovetop does.

Usually, these same people will also tell you to preheat your pan in the oven instead of on the stovetop.

I agree that this method is a more thorough way of drying (or preheating), but it is also more time-consuming.

And at least for drying, I see no reason to go to this extent.

But let’s say you plan to oven season, and your oven is going to be on anyway.

In that case, you can put your pan in the oven for a few minutes while it is preheating.

So, I hope you now have a better understanding of why cast iron needs to be dry.

You don’t want rust, which usually happens when you leave your cast iron wet for too long.

I’m not talking about leaving it wet for a few minutes, but don’t let it air dry, soak, or run through the dishwasher.

And don’t boil pasta or a pot of beans because 20 plus minutes of boiling water will not be kind to your seasoning.

You should avoid these things at all costs.

Instead, choose a way to dry your pan. Either with a lint-free towel, on the stovetop, or in the oven.

How do you dry your cast iron?

Perhaps you have been exploring whether you want to cook with cast iron, and you’re now at the point you’re ready to start.

In that case, check out my Which Size Cast Iron Skillet Should I Get?