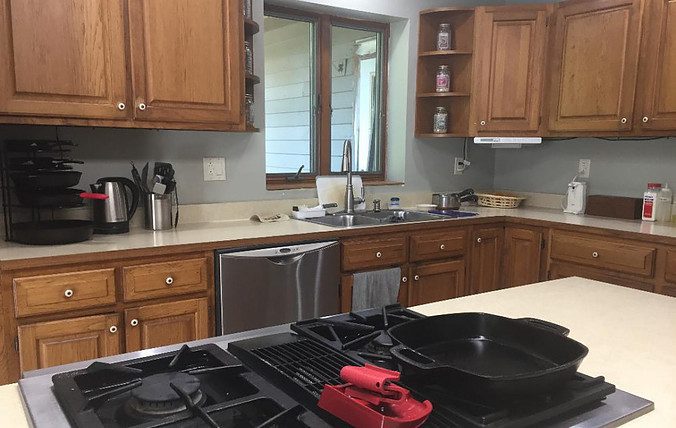 Do you have an opinion?

If you own a vacation rental property, you probably do.

Or, if you stay at Airbnbs when you travel, you might have a preference.

Not long ago, I wrote an article on who travels with their cast iron, and I was somewhat surprised that some people do.

So, I decided to find out what others thought about having cast iron cookware in an Airbnb.

What do you think I found out?

An Airbnb host has a lot to consider when furnishing and stocking the kitchen with cookware. Will the guests be happy with their options? Will they take care of the cookware? And will they know how to cook in the pans that they find? There really is no way to answer this question about whether Airbnb hosts should or shouldn’t supply cast iron cookware. Some guests will love having cast iron, but many will have no idea how to use it and will inevitably fail to dry or season it, leaving it to rust or build up black residue.

Not everyone who stays in an Airbnb cooks, but a high percentage do some cooking while there.

And most want it to have a feeling of home.

When a host wants to know what type of pots and pans to put in their vacation rental, where will they go to find out?

And checklists put out by Airbnb and Vacation rental Sites.

And everything in between.

No one said you should supply high-end cookware.

Additionally, most of the discussion centered around how often they had to replace pots and pans or how difficult it was to clean them between guests.

Cast Iron was often discussed but generally dismissed as a viable option since many people don’t know how to cook in or care for cast iron.

But most hosts recommended getting used to the idea of having to replace the nonstick cookware often because that seemed to be what most people knew how to cook in.

Some recommended using Bar Keeper’s Friend or oven cleaner since they opted to provide pans often “ruined,” such as stainless steel and cast iron.

It was interesting, though, that many hosts used cast iron in their own kitchens. But wouldn’t put them in their Airbnb.

And that led me to wonder why so many people don’t know how to cook in cast iron.

I don’t know the answer, but I do think it’s true.

We got used to nonstick and lost the knowledge of how to cook with anything else.

When looking at the checklists, I found stainless steel copper bottom, nonstick, ceramic nonstick, Gotham steel, and, you guessed it, cast iron.

Recommendations for cast iron cookware included a dutch oven and a skillet.

Those who recommended cast iron pans always considered them nonstick but also listed another type of nonstick as well.

In other words, cast iron should be available, and another nonstick option for those who don’t know how to cook in cast iron.

You shouldn’t put it in the dishwasher, leave it to soak, or let it air dry.

Those are cast iron no-nos.

Because all of these things can and do lead to rust.

Finding rust on your cast iron isn’t the end of the world, and your pan isn’t ruined, but it will take some work to get it back in shape.

Based on its corrosive nature, cast iron probably isn’t the only option of cookware an Airbnb should have.

But it’s nice when there is at least one skillet.

When my daughter lived in an Airbnb for several months, her place had one cast iron skillet.

She moved it to the back of the cupboard because she knew it had special rules, and she didn’t want to ruin it.

She also had heard you couldn’t use soap, but that’s not true. A little soap will not hurt the seasoning.

Honestly, she didn’t understand why any host would put cast iron in an Airbnb, but we were thrilled when her dad and I went to visit.

I was even able to teach her a few “rules” of cooking with cast iron.

Not that I convinced her to start using it, though. Not yet, anyway!

All that to say, a host is responsible for the condition of the cookware.

And I’m sure my daughter’s host appreciated that she didn’t want to ruin the skillet.

Still, I like that there was an option to use cast iron.

From the few times I’ve stayed in an Airbnb, I know the kitchen is more like my own kitchen at home.

Meaning there was an assortment of pots and pans.

And I think it’s reasonable to say that’s what most travelers want.

A taste of home.

I’ve also read that every Airbnb should have a good knife.

Not every traveler will want cast iron cookware, but some will.

Cast iron has made a comeback in recent years, and more people are cooking in it than before.

Because it lasts a lifetime, cast iron will always be around.

So as an occasional traveler, I think every Airbnb should have at least one cast iron skillet.

And maybe a dutch oven.

Have other options as well so no one feels obligated to cook in cast iron.

One example of an Airbnb that emphasizes cooking in iron skillets is U.P. Cabin Lakefront.

And that’s another thing.

It’s always a good idea to let your guests know what cookware you are supplying.

Another thought would be to leave instructions or a video they can watch like the one below.

How to Cook and Care For Cast Iron

So, what do you think?

Knowing the concerns that go with providing cast iron, do you think it’s an essential item or an extra?

Weighing the responsibility for upkeep or replacing cookware with trying to please your guests, is cast iron a good option or too risky?

Let me know your thoughts in the comments below.

Plus, there is always the possibility that you are an Airbnb host and, after reading this, have decided to add a cast iron skillet to your place.

In that case, check out Which Size Cast Iron Skillet Should I Get?.