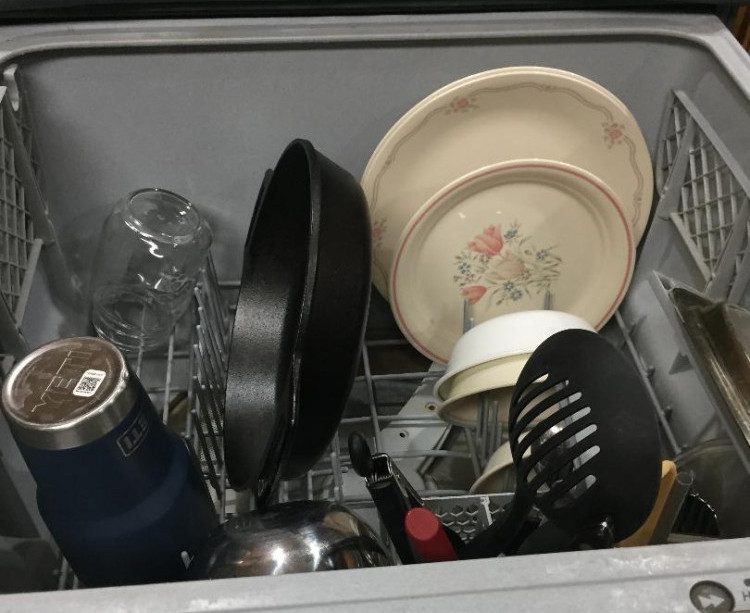 Are you asking, “Why can’t I put my cast iron in the dishwasher?”

I mean, it would be so much easier, right?

No scrubbing or following specific steps to clean your pan; just rinse, load, and run the dishwasher with all your other dishes.

You probably should think about what your cast iron will look like when it comes out of the dishwasher.

Yes, it seems like it would be easier, but not if you make more work for yourself by putting it in the dishwasher.

Will it ruin your pan?

Will it cause you more work than if you just washed it by hand?

But, let’s find out more.

Why Can’t I Put My Cast Iron in the Dishwasher?

1. The dishwasher may wash off your seasoning

Seasoning is a unique part of using cast iron cookware. It protects your iron from the elements that can cause it to rust, namely oxygen, and water.

People spend years building up the perfect seasoning and boast of how nonstick their skillet is.

Many people inherit or hunt for old cast iron because of its superior seasoning and shiny surface.

Others sand their newer, textured cast iron pans to make it smooth and build the seasoning from there.

But at its core, seasoning is about protecting the iron from rusting.

Whether you use old or new cast iron, seasoning is a necessity.

If you are interested in knowing more about seasoning, I have written a couple of articles:

One for oven seasoning, Seasoning Your Cast Iron Skillet – New or Old

And another for seasoning in between uses, Keeping Your Cast Iron Pan Seasoned – 4 Different Methods

2. The Dishwasher will expose the iron to air and water

If you put your pan in the dishwasher and it washes off the seasoning (which it probably will), your pan is then exposed to the air and water. And this means rust will form.

Now it’s not the end of the world to find rust on your cast iron skillet. Surface rust, in particular, does not take too much scrubbing to get off.

And from one time in the dishwasher, you probably will only get surface rust.

Plus, your cast iron can rust even without being put in the dishwasher.

For example, if you neglect to dry your skillet thoroughly after you’ve hand-washed it, it will most likely rust.

So, please don’t worry if you find some rust on your favorite skillet.

Just wash or scrub it off, dry your pan, and apply more oil. Or if you think it needs a good oven seasoning, you can do that too.

Have a look at the video, and you will see a man wash his cast iron skillet in the dishwasher. And what he does to restore it.

Can You Put Your Cast Iron In the Dishwasher?

How Does Iron Rust?

Let’s get scientific for a moment. When you expose iron to moisture or air, oxidation takes place. During this chemical reaction, iron is converted to iron oxide. But when iron comes in contact with both oxygen and water, it’s called iron hydroxide or hydrated oxide.

The Chemistry.StackExchange site had this to say about the difference between iron hydroxide and iron oxide:

“Pure iron hydroxide is usually yellow, and pure iron oxide is bright red. Anything in between is going to be brown. When found in nature it’s called “limonite”, and when formed by rusting of iron, it’s called “rust”.”

Finding out that iron hydroxide is usually yellow is interesting because I sometimes turn my cast iron skillet over and see one to two thin yellow lines across the bottom. It always washes off very easily, and then I simply apply a thin layer of oil, and it’s good to go.

And now I know pure yellow means iron hydroxide and is a form of rust.

Basically, iron rusts when it oxidates. It can happen quickly or slowly, depending on its environment.

Other Factors That Affect the Rusting Rate

Coating your pan with oil puts a barrier in between the iron and the air, protecting it from humidity or splashing water. Seasoning (with oil or other fat) will undoubtedly slow down the rate of rusting.

On the other hand, hot iron rusts faster than cold iron because heat typically speeds up chemical reactions.

And thin iron can rust through (get holes in it) quicker than thick iron. So it’s a plus that cast iron is generally thick.

At the Department of Physics at Urbana-Champaign website, Tom says, “Fresh iron exposed to a hot atmosphere with plenty of oxygen and water will form a thin layer of rust immediately.”

Even though cast iron isn’t pure iron (it’s iron combined with various alloys), it still is very susceptible to rust.

So, there you have it. If you were asking, “Why can’t I put my cast iron in the dishwasher?” you now know two primary reasons why it’s not a good idea.

The dishwasher will most likely remove the seasoning and protective barrier and expose the iron to both air and water, both of which are enemies of iron.

Additionally, you found out that you can put your cast iron in the dishwasher, but most people don’t because they would rather not deal with the rust and the additional work required to restore it.

And if you’re into science, you may have found it interesting to learn about oxidation and its role in rust.

Or the difference between iron oxide and iron hydroxide might have piqued your interest.

I enjoy learning about the science of cast iron as long as it’s explained simply.

Anyhow, I hope you found the answer to your question and that you enjoyed reading this article.

If you have any questions or interesting stories about putting your cast iron in the dishwasher, I would love to hear from you.