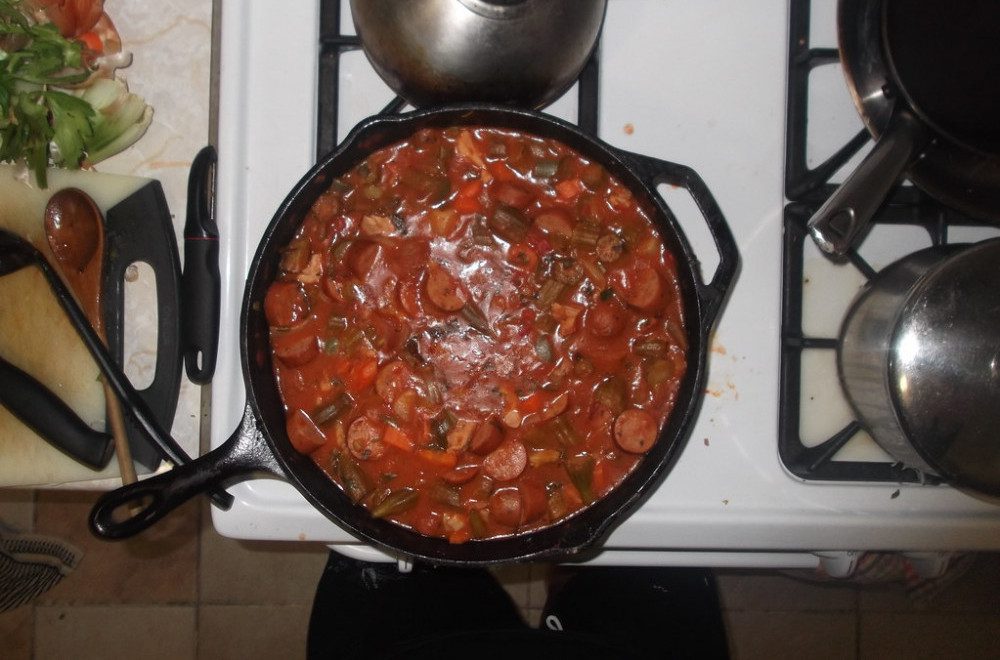 Since you can wash cast iron in water, is it okay to boil water in seasoned cast iron?

Because the seasoning should protect the iron from rusting, right?

But what happens to the seasoning while the water is boiling?

And what about cooking water-based soups or boiling pasta?

These are all questions that need an answer.

So let’s get going.

Is It Okay to Boil Water in Cast Iron?

The short answer is yes, it’s okay to boil water in cast iron. But you will need to keep a few things in mind. Some people say boiling water will release the seasoning or, at the very least, soften it. Once the seasoning is released, it may flake off into your food. Or it will be more susceptible to scratching if it has softened. But others say boiling water will not hurt the polymerized seasoning, so go ahead and boil if your pan is well-seasoned. And if you have issues, it’s because of how you seasoned your pan, not because boiling water is bad.

Why You Shouldn’t Boil Water in Your Cast Iron

Let’s face it; some people have had bad experiences with boiling water in their cast iron pan.

So, it’s only natural they will say you shouldn’t do it.

The main reason they give is you lose layers of seasoning that you worked so hard to get.

Either they noticed black flakes in the water or on the food, or the surface of the pan looked different. The seasoning was uneven and patchy.

But when you hear their stories, it sounds more like they weren’t seasoning their pan in a hot enough oven or for a long enough time. Therefore, the oil wasn’t actually polymerizing.

Also, there is some confusion over what is meant by boiling water.

Are you talking about boiling an inch of water for a minute to soften up stuck-on food or making pasta that requires the water to boil for 20 or so minutes?

Whereas many people say, boiling water for pasta is probably not the best idea, boiling an inch for a short amount of time to loosen that egg stuck to the pan is fine.

Why It’s Okay to Boil Water in Your Cast Iron

People who say it’s okay to boil water in your cast iron pan also think that any seasoning that flakes off during boiling isn’t the polymerized oil.

And, they say, that’s the whole point of seasoning, to adhere the oil to the iron and get a plastic-like surface.

Therefore, if you don’t season the pan right, boiling water will cause it to release and flake.

In other words, boiling water is not the problem; the seasoning is.

If your pan is well-seasoned, it will hold up to boiling water.

And if your pan is not well-seasoned, it will flake off.

Besides, what’s the big deal if you have to reseason your pan?

That’s the attitude of many who thought boiling water in your cast iron was acceptable.

I was surprised at how many people thought of seasoning as a regular part of their cast iron routine.

So, to them, reseasoning wasn’t a big deal.

To read more about seasoning, check out Seasoning Your Cast Iron Skillet – New of Old.

Besides Cleaning, Why Else Would You Boil Water in Cast Iron?

We already mentioned cooking pasta might not be the best idea, but what about soup?

Many soups are water-based.

So it’s okay to make soup in your cast iron?

Again, some say yes, and some say no, but as one person said, “I think I will just look for soup recipes made in cast iron and go from there.”

I have never boiled water in my cast iron.

It’s not my preferred way of cleaning, and I make soups and pasta in other types of pans.

But someday, when I get a dutch oven, I think I will try the Vegetable Beef Soup in the above video.

Anyway, because I have no experience with boiling water in my cast iron, take my opinion for what it’s worth.

I can understand boiling water to clean food that gets stuck on your skillet, but only if I knew my seasoning wouldn’t be affected.

Unlike those who thought reseasoning was no big deal, I happen to think it is.

Well, maybe not a big deal, but one I want to avoid if I can.

I still have one question: If boiling water can remove layers of polymerized seasoning, why do people have to sand their skillet to remove the coating? Wouldn’t boiling water do the same thing?

My guess is boiling water does not remove polymerized oil. If you find the seasoning flaking off in your water or food, it’s more likely because the top layer of seasoning was not entirely baked in.

Since I do not boil water to clean my cast iron, I find other ways that are just as effective.

For example, a scraper and a little soap and water are all I use.

But I also have chainmail for the more stuck-on food.

Or you can try two other ways, like in this video.

So, as you can see, there are some things to consider before deciding whether to boil water in your cast iron pan or not.

Is it okay to boil water in your cast iron?

That mainly depends on what you mean.

If you want to clean off food that is stuck, then yes. But even then, you need to think about your seasoning.

If it flakes off, are you willing to reseason it, or would you rather avoid the possibility of having to like I would?

On the other hand, if you want to boil pasta, I wouldn’t recommend it.

And, because there are so many recipes for soups and stew in cast iron, especially if you are simmering rather than boiling, you should have no problems.

What are your thoughts on boiling water in cast iron?