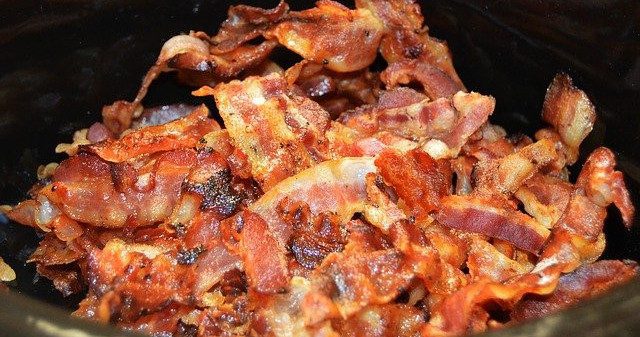 Who else is asking, “Should I preheat my cast iron skillet to make bacon?”

Bacon is, without a doubt, a favorite food for many.

Plus, it’s easy to make.

And yet, getting your bacon the right amount of crispy can be tricky.

Is the way you begin, with a preheated or “cold” pan, an essential factor to consider?

Should I Preheat My Cast Iron Skillet to Make Bacon?

The goal for bacon is to get it crispy rather than rubbery. How you achieve that is up for debate. Those who say you must start with a cold skillet and heat the bacon and the skillet together, and those who say you need to preheat the pan, claim their way will produce crispy bacon. Both sides agree the bacon needs to cook in its own fat. Therefore, that seems to be the key more so than whether you preheat your pan or not.

How Do You Make Crispy Bacon?

Asking if you should start with a hot skillet or a cold one may not be the right question.

Both sides claim their way will get you that perfect piece of bacon. And both are right.

Getting crispy bacon is more about patience and knowing when to take it out of the pan.

Undercooking is the real problem.

Everyone knows when they’ve cooked their bacon too long, and it’s burnt, but not everyone realizes that the real reason their bacon is limp is that they didn’t leave it in the sizzling grease long enough.

Here is how you make your bacon if you are preheating your skillet:

When using a cold pan, it’s not really cold, but room temperature.

Did You Notice the Difference in the Methods?

If you read both ways of cooking the bacon, you will see the only difference is how you begin.

One way starts in a preheated skillet; the other begins in a room temperature pan.

Both ways take approximately the same amount of time to make, but the bacon is put in the skillet sooner and will heat up with the pan with the cold method.

The bacon will spend less time in the skillet with the hot pan method because it will cook quicker once added.

The main advantage I see is that you are not preheating an empty pan with the cold method. I’ve been assured by many, though, that adding cold bacon to a preheated skillet will not cause a thermal shock as long as it’s heated on medium, not high.

1) If your bacon is especially thin, it will cook faster and need to be turned sooner. It is more likely to burn, and it may even stick. I have had to use a spatula to unstick my bacon before.

2) Another thing to keep in mind: if your bacon is particularly long and it doesn’t fit in the pan without going up both sides, you might want to cut it in half. It will be more challenging to get the ends crispy.

Of course, bacon does shrink as the fat renders, but if the ends start on the sides of the pan, they may not cook as quickly as the rest of the bacon.

3) One last thing to consider is how much bacon to cook at once. Well, that depends on the size of your skillet, but don’t overcrowd your bacon. Each piece should be touching the pan and not overlapping each other.

How to Keep Your Bacon From Sticking

I have never had to do what I’m about to tell you, so this comes from other people’s recommendations.

If you find that your bacon is sticking no matter which method you use, you might want to add oil to the pan and preheat it.

Many people, as did I, think that because bacon has so much fat, it shouldn’t stick. And the fatty part doesn’t. But in some newer pans where the seasoning hasn’t yet built up, your bacon may stick. So adding a bit of oil will help.

Sugar is often the cause of sticking, from what I read. Because bacon is cured, and sugar is one of the ingredients used in curing, that is another possible reason why your bacon might stick.

So, three reasons your bacon may stick are, it’s too thin, your pan is not seasoned enough, or the sugar is the culprit.

How I Make Bacon

I won’t go into detail as I went through the hot and cold pan methods above.

Suffice it to say, I have used both methods, and I find both ways work. We enjoy crispy bacon most mornings, regardless of the pan’s temperature when we add the bacon.

Occasionally, we burn our bacon, but that’s because we get distracted, lol.

And other times we don’t cook the bacon long enough, or we don’t cut it when we probably should, so we have rubbery ends. Or the bacon was too thin, and that’s the reason it burned.

But, overall, both ways of cooking bacon have worked well for us.

In addition, I like cooking our breakfast in our square cast iron skillet because the bacon fits better than it does in a round pan.

If you were asking, “Should I preheat my cast iron skillet to make bacon?” I hope you have found the answer you were looking for.

Whether you preheat your skillet and then add the bacon, or you heat the bacon with your cast iron pan, you can get the desired crispy bacon you are after.

But there are some other things to consider:

If you like the idea of having a square cast iron skillet for making your bacon, feel free to read my review: A Cast Iron Skillet Review – Backyard Creations 10X10.

However, I can’t recommend this pan.

Affiliate Disclosure: I am a participant in the Amazon LLC Associates Program. If you make a purchase using the affiliate links below, I receive a small commission.