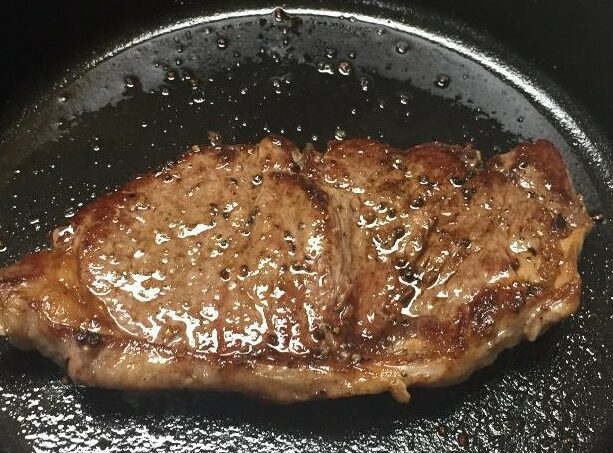 Who is asking, “How do you reverse sear a steak without a thermometer?”

Your steak is in the oven or on the grill cooking at a low temperature. But, if you don’t have a thermometer, how will you know when to move the steak to your cast iron pan to sear it?

You would know the same way you know your steak is done no matter how you are cooking it.

So, the question is more about steak doneness without a thermometer than about reverse searing.

If you were hoping to learn more about reverse searing, click here.

This question raises another question: Do you need a thermometer to know when your steak is done?

Some say, yes, absolutely, you need a thermometer, but others will swear by the touch method.

What is the touch method?

How Do You Reverse Sear a Steak Without a Thermometer?

The easy answer to reverse searing without a thermometer is using the Finger Test. A touch test helps you know where your steak is at in the cooking process. By touching your thumb to one of your fingers and then touching your steak, you can determine if it is rare, medium-rare, medium, or well-done. You will not need a thermometer.

Is the Finger Test As Good As a Thermometer?

Some people love using the finger test. “It’s the best way!” they claim.

I learned about this way of testing for steak doneness from my son-in-law, and this is what he does.

Even chefs use the finger test.

Of course, chefs frequently make steaks and get more practice than the average person making a steak at home.

The finger test isn’t an exact science, and it may take practice to get it right. You might not ruin your steak, but you also may not succeed the first time.

They say practice makes perfect, and that may be a good mantra for this method.

Or if you aren’t that picky, you might be happy as long as it’s close (that would be me).

So why would you opt for the finger test over a thermometer? Are there definite advantages? Disadvantages?

The Advantages of Using the Finger Test

The Disadvantages of the Finger test

Clearly, using the finger test to check for steak doneness if you are reverse searing is an acceptable method. Many people use it and love it.

In fact, you can use the finger test to test other types of meat doneness as well, from chicken to pork chops and other red meats. Of course, meats such as chicken will be a little trickier.

Others say using the finger test is too risky; they would rather have an exact temperature to know that their steak is cooked the way they want it.

Those who promote the finger test say it’s better because a thermometer causes the juices to run out.

And the ones who say using a thermometer is best also claim it’s not true that the juices run out.

So, who is right?

I don’t know, but no juices run out with the finger test, that’s for sure.

In the end, how you test for steak doneness is a matter of preference. There is no right or wrong way.

Well, we have a meat thermometer, but I have yet to use it for steak. I have only used the finger test, and just recently. Before that, I guessed.

I guessed and often overcooked it.

We only use our meat thermometer on the turkey made in an air fryer twice a year, as far as I know.

My husband does more of the grilling and doesn’t use a meat thermometer or the finger test. He just seems to be good at guessing. Because the only time whatever meat he is making on the grill doesn’t turn out well is when he gets distracted or forgets about it for too long.

It’s always best to stay focused when you are grilling.

If you are reverse searing in the oven, you can set a timer.

I, on the other hand, have yet to reverse sear a steak. But when I do, I might try using the meat thermometer. Putting my hand in the oven or pulling out the rack to touch the steak doesn’t sound any easier than placing a thermometer in the meat.

But for regular searing on the stovetop, I will continue using the finger test.

If you decide to use a meat thermometer instead of the finger test, the above video will tell you the different temperatures to look for when testing for steak doneness.

How do you reverse sear a steak without a thermometer? You use the finger test. It is a good way to test for steak doneness, even if a bit subjective.

There are some advantages and disadvantages, but if you don’t have access to a thermometer, the finger test comes in very handy.

And it takes out most of the guesswork.

On the other hand, a thermometer takes out all of the guesswork.

So, if you asked the question about reverse searing without a meat thermometer because you don’t have one but now decided you do want one, I recommend the ThermoPro TP03 Digital Instant Read Thermometer.