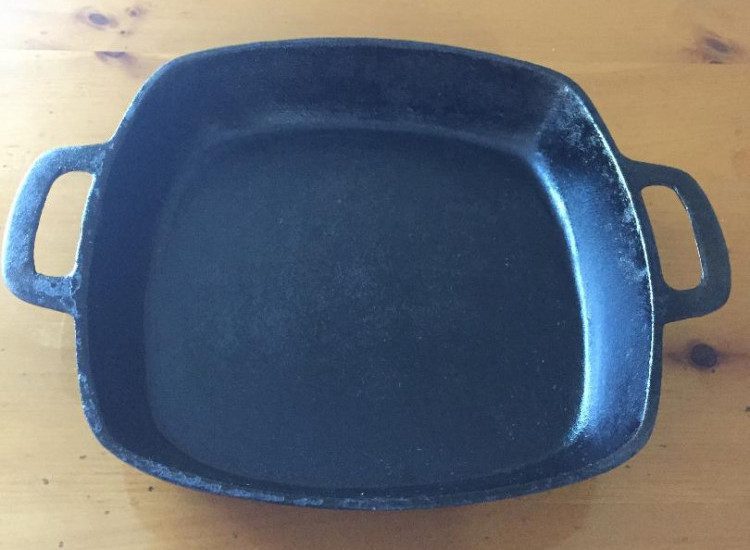 I have had this skillet from the beginning. So I wanted to do a review on the first cast iron I ever used.

It’s the pan I learned the basics on before venturing into other skillets.

Unfortunately, I haven’t found the Backyard Creations skillet advertised or sold anywhere except Menards, a hardware store mainly in the midwest (USA).

I worked at Menards so I was familiar with the pan, but wasn’t using cast iron at the time. That I received my first cast iron skillet from the place where I once worked is not surprising.

Menards is a popular hardware store in our area and a favorite spot for my husband to shop. He is the one who gave me my first cast iron skillet, but I am the one who picked it out.

Update 2022: I still use this skillet, but it doesn’t seem to build up seasoning very well. Rust lines often appear on the bottom and randomly I have trouble with my eggs sticking. But until I decide to replace it with another 10-inch square pan, I will keep using it for our breakfast. And it will continue to sit on the stovetop.

What makes this skillet different from any other cast iron pan? Well, for starters, it comes bare. That means it wasn’t pre-seasoned in the factory. You will have to season this skillet in the oven before you use it.

Another thing is it is inexpensive compared to other cast iron skillets.

What makes it the same? This cast-iron skillet is the same in that it is durable, has good heat retention, cooks fairly evenly if it is hot enough, and you can use it on the stove or grill, in the oven, or over a campfire. It is also on the heavier side just like other cast iron skillets.

It is the only square pan I own but square pans are not unusual. So I’m glad I have at least one.

Here are some things I don’t like about this skillet:

What We Do With Our Square Skillet

As I already mentioned, this is my husband’s favorite skillet. He especially likes that it is square. All my other cast iron pans are round. What does it matter? It doesn’t; it’s more preference.

Every morning we make breakfast and eat together. For over ten years, I left the house for work around 4:40 am, and before that, we were raising children. So eating together has become very significant to us.

We eat bacon and eggs. I started eating this way when I was following a Paleo program set up by one of my trainers at the gym. I only followed this program for six months but some things stuck. Eating bacon and eggs every morning was one of them.

I was getting up at 3 am and eating breakfast around 4 am Monday- Saturday. But on Sundays, my husband and I started eating bacon and eggs together before church.

Once I quit work, we quickly moved into making this part of our morning routine. My husband had retired so we didn’t have to stick to a strict schedule of when to eat. Though we generally eat between 7 and 8 am.

Here are the cleaning steps I go through each time:

So there you have it; a cast iron skillet review of my first skillet. This article has been more of a personal review since there isn’t much information on this pan.

I hope you have enjoyed reading this review about the Backyard Creations skillet and if you have any questions, be sure to ask in the comment section below.

Unfortunately, I don’t really recommend this skillet because I couldn’t find out enough information about it.

Let me know your thoughts on this skillet.