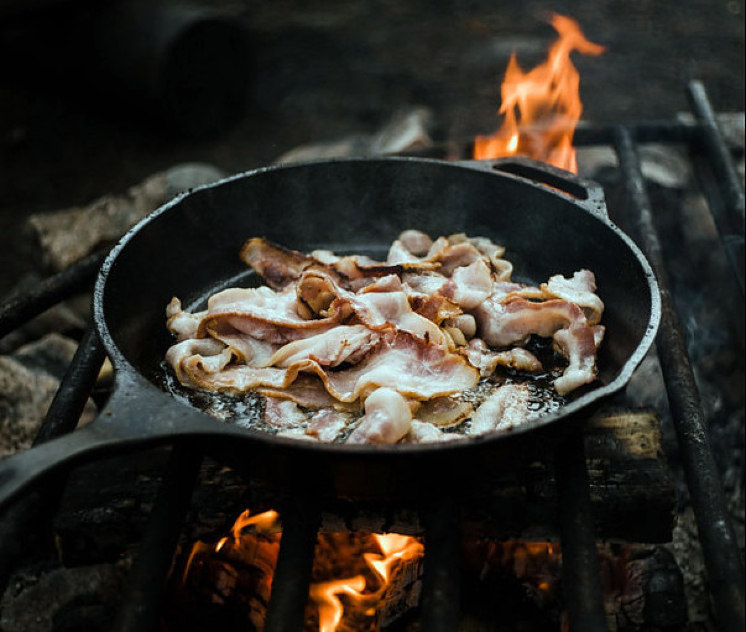 Why does bacon curl when frying?

I always thought it was because you didn’t lay it flat in the pan.

Or you couldn’t get the ends to lay flat.

But apparently, there is more to it than that.

So, if you’re wondering the same thing, let’s get started.

And along the way, you’ll learn about nine solutions for keeping your bacon flat and straight.

Why Does Bacon Curl When Frying?

One reason bacon curls when frying is the meat and fat reduce at different rates renders. This difference causes the bacon to buckle and curl. Another reason is the heat. The bacon will shrink and curl when it’s only exposed to heat from one side, making the oven a better place to cook it. One other reason has to do with bacon that is wet-cured. The more liquid in the bacon, the more it will curl. The water in the bacon plus the fat rendering is why.

So, one of the reasons bacon curls is when it only gets heat from one side. And the solution is cooking it in the oven.

That makes sense because the oven will heat the bacon on all sides.

But it’s not quite that simple.

The first time I cooked bacon in the oven, I filled my cast iron baking sheet with eight or nine slices.

I had heard how amazing oven-cooked bacon tasted, but honestly, I didn’t see any difference. Not only did my bacon taste the same, but it also looked the same.

Since I wasn’t concerned with curling, it didn’t stand out. But I remember thinking there was nothing special about cooking my bacon in the oven.

However, it’s possible I simply didn’t notice how flat it was. So, if you are tired of having your bacon curl in a skillet, the oven is at least worth trying.

1. One baking pan – put pieces of bacon on a parchment or foil-lined baking sheet (with sides). Mainly this makes clean-up easier. You can also place the bacon straight on a lightly oiled pan.

3. Baking pan plus rack – put the bacon on a rack that fits inside the baking sheet like this one. That way, the bacon will not cook in its own grease. For easier clean-up, line the bottom of the pan with foil or parchment paper.

Personally, the primary advantage I see to cooking your bacon in the oven is you don’t have to watch it constantly. Set a timer and check the bacon when it goes off.

However, you might find that it helps you to get straight bacon.

The microwave is a quicker option than the oven.

Put a couple of paper towels down on a microwave-safe plate. Lay the bacon on top, and cover it with a couple more paper towels. Microwave one minute per piece of bacon. It should come out straight, and the paper towels will soak up all the grease.

Frying Bacon With a Bacon Press

The stovetop is my preferred way to cook bacon. And the most common way overall. But it does mean dealing with buckled bacon, especially the ends which tend to curl the most.

1. Low and slow – cook your bacon on low heat, slowly letting the bacon fat render. You may even want to start with a cold pan, but add a little oil to keep the bacon from sticking. It won’t eliminate all curling, but there should be less. And if you turn your bacon often, this may also help.

2. A bacon press – it’s heavy, round, and fits inside a skillet. Basically, you set the bacon in the pan and place the press over the top, like in the video below. Your bacon will cook faster and be flat.

3. The water solution – cover your bacon with water and let it evaporate as the fat renders. Continue to cook the bacon to the desired crispiness after the water is gone. Surprisingly, your bacon will be flatter because the fat rendered slowly. However, this way also changes the texture, as seen in the video.

The ends are often the most problematic when it comes to bacon curling. So, you eliminate most of the problem by cutting them off.

But even cutting each piece in half will help. Or you can cut the whole package in half because the shorter strips generally have less curling.

Affiliate Disclosure: I am a participant in the Amazon Services LLC Associates Program. If you make a purchase using one of the affiliate links below, I receive a small commission.

Most bacon today is wet-cured. So these other two solutions have to do with the type of bacon you buy.

1. Lean bacon – the less fat the bacon has, the less curling. The meat will naturally cook flat. It will also have less flavor, in my opinion.

2. Dry-cured bacon – the less liquid in the bacon, the less curling there will be. Click here to go to Amazon and see what choices you have.

If you’re concerned with why your bacon curls and are looking for a solution to make it flatter, I hope you found one you want to try.

There are three solutions for cooking bacon in the oven: you’ll need one baking pan, two baking pans, or one baking pan plus a rack that fits inside.

If you like the rack inside a baking pan solution and want to get it as a set, you can check out this one at Amazon.

Another solution is making the bacon in the microwave.

However, if you are partial to frying your bacon in a skillet (hopefully cast iron), the three solutions include cooking it low and slow, in water, or using a bacon press.

The bacon press will speed up the cooking process as well as ensure your bacon doesn’t curl. If this sounds like the best solution and you need a bacon press, Amazon sells this one (it may be the same one in the video).

And the final two solutions have to do with the type of bacon you buy: either lean or dry-cured.

All together, you have nine solutions from which to choose.

Or you can be like me and not worry about your bacon curling. I place the bacon flat in the pan, giving each piece its own space. I cook it low and slow in a preheated pan, turning it often (but not at first). Sometimes, I cut it in half. And it usually turns out like you see in the picture. A little curling, but not too bad.

Let me know how you cook your bacon and if you will try one of the solutions.

And if you would like to know more about a bacon press, check out my Bellemain Cast Iron Bacon Press Review.