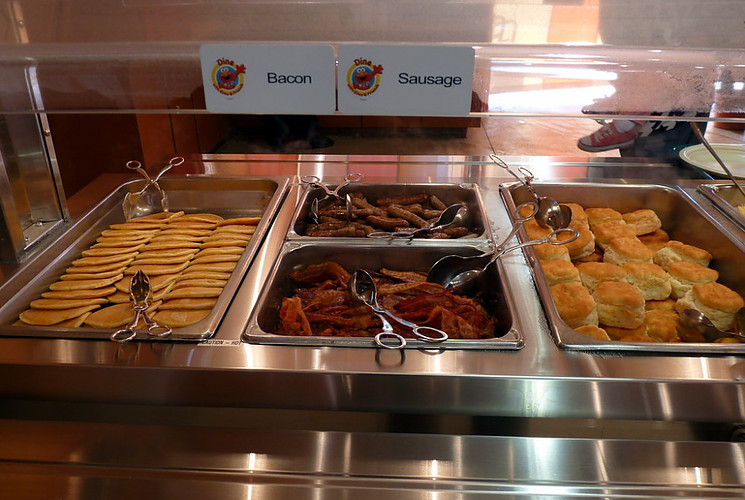 Hotels with breakfast buffets have to make their bacon in bulk.

They aren’t catering to the individual but still attempt to provide uniform, tasty bacon.

Some hotels have restaurants and, therefore, do cook for the individual.

In that case, they may have a different process and not be making it until the order comes in.

Unless, of course, the restaurant has a buffet.

With that in mind, how do hotels (and caterers) cook bacon in bulk?

How Do Hotels Cook Bacon in Bulk?

It’s not hard to cook bacon in bulk if you cook it in the oven. You’ll need large, lipped baking sheets, parchment paper, racks, or perforated pans. This combination makes it possible for hotels, restaurants, and catering services to get uniform, crispy bacon. And yet, each hotel will have different ways of achieving it. The technique, oven temperature, and cooking time are all factors to consider.

Similarities in Cooking Bacon in Bulk

Even though hotels don’t all make their bacon the same way, there are some similarities. Hotels generally use:

Bacon is usually a hit no matter where you eat.

Neither is my favorite way, but it may be someone else’s.

And that’s where the technique comes into play.

Some hotels cook the bacon on a rack inside a baking sheet, so it’s not cooking in its own grease. That way, the bacon doesn’t need to be drained, and it crisps up quicker.

Or they use perforated pans.

Sometimes chefs spray or oil the racks or perforated pans so that the bacon won’t stick. And parchment paper may or may not be put in the bottom of the pan for easier clean-up.

More commonly, hotels cook the bacon right on the parchment paper. They may also cover it with another piece of parchment paper, and use a rack or second baking sheet on top to make the bacon flat (like in the video below).

When I worked in a high school kitchen, I don’t remember making bacon. But we often cooked food on parchment paper and used a cooking spray to keep the food from sticking.

So, it’s a possibility that hotels also spray their parchment paper.

One other way is to use two racks or perforated pans below and on top of the bacon.

As one chef says after switching from parchment, “Eventually we sandwiched the bacon between two perforated sheet pans – the bacon cooked faster and drained and browned better than in parchment.”

It should be noted that sometimes hotels par-cook the bacon, meaning it’s mostly cooked. Par-cooking can be done ahead of time and quickly finished as needed.

The technique is only one factor to consider when making bacon in bulk.

Two other factors involve the time and temperature of cooking.

How Do Hotels Cook Crispy Bacon?

Just as hotels use various techniques for making bacon in bulk, they also cook it at varying times and temperatures that give them the type of bacon they want.

For example, do they want par-cooked, chewy, crispy, or extra crispy?

Convection ovens are desirable but not necessary.

Times will depend on the technique, oven temperature, thickness of the bacon, and the desired doneness. So, it’s nearly impossible to say how long.

However, one chef who par-cooks the bacon on a baking sheet lined with parchment paper had this to say: “Line the bacon up overlapping ever so slightly try and fill the entire tray. [Cook] 450°F 10 minutes. Or 375°F check after 15 minutes. This will leave the bacon 80-90% done and you can finish it off with a minute or two on a flattop or just back in the oven on a small sheet pan.”

Or, in the case of a buffet, you might finish it off right in a shallow steam table pan.

Most people aren’t cooking bacon buffet style, but they may want to learn how to cook it in bulk.

Cooking for a Crowd at Home

Maybe you were curious about how hotels made bacon in bulk because you have a large group of people for which you will be cooking bacon.

Or a large family, and you are cooking it a pound at a time.

You can definitely use the techniques that hotels use. And find some general ideas about time and temperature.

Or, if you would like a specific home recipe (method), see Buffet Style Oven Baked Bacon.

Well, there you have it–hotels and how they cook bacon in bulk.

So, next time you stay at a hotel with a buffet-style breakfast, you will know how they made it.

Well, maybe not exactly how. But it was most likely in an oven.

And probably in one of three ways: on parchment paper, racks, or perforated pans.

But chances are, you won’t know if it was par-cooked first and finished right before serving or started 15-20 minutes before bringing it out.

Buffets are tricky because you don’t know exactly when the pan will need to be refilled or switched out.

However, you’ll agree that bacon tastes better when it’s cooled a bit if you’re like me. I never eat my bacon hot.

Therefore, I’m perfectly happy if the bacon is only warm. But I always hope for crispy. And not too dry.

And as far as the time and temperature, it varies.

Surprisingly, bacon can be cooked at different temperatures and times and still come out the way you like it.

Overall, it seems that cooking bacon is more of an art than an exact science.

How do you like your bacon? And have you had good experiences eating bacon at hotels?