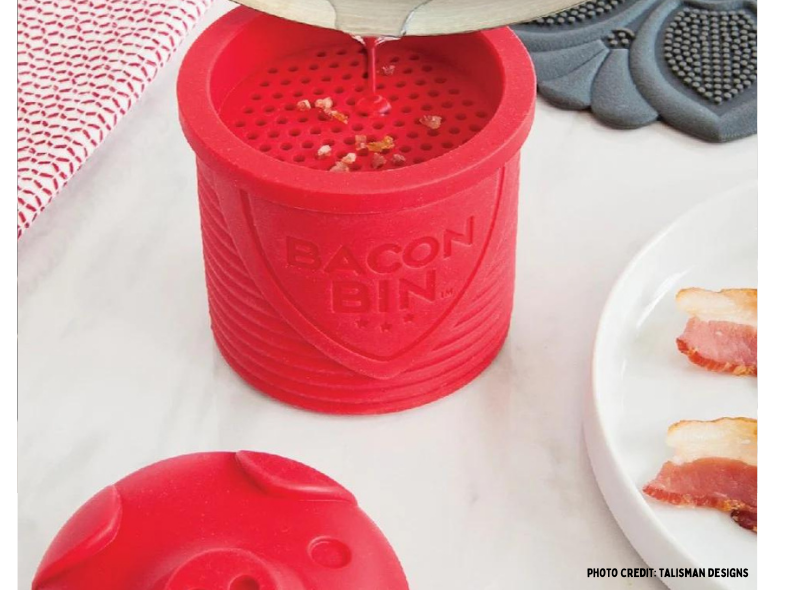 Are you tired of storing your bacon grease in a tin can or glass jar?

Do you wish you could easily strain the grease to get the bacon bits?

If you answered yes to either of those questions, this bacon bin might be just what you are looking for.

However, you might want to know a little more.

What Is a Bacon Grease Strainer?

A bacon grease strainer is a container for holding bacon grease. They come in different sizes and generally replace a tin can or glass jar. However, what makes them better is they come with a built-in strainer for separating the impurities. So your grease will last longer and cook cleaner. You can store a bacon grease strainer on the counter, refrigerator, or freezer.

A Little About Talisman Designs

Talisman Designs was founded in 2002 by Katherine Waymire. She began her business in her basement making wine accessories.

Today, you will find the Talisman Designs headquarters and warehouse in Minnesota, USA. And most impressively, the business has gone from making a few products to hundreds.

Talisman Designs is known for its unique and innovative kitchen gadgets. And they have this motto: “Happy and surprising solutions to everyday kitchen problems that help you and your food stand out.”

They are proud to be endorsed by experts such as Today, bon appetit, Better Home and Gardens, Taste of Home, US Weekly, Rachel Ray, America’s Test Kitchen, The Boston Globe, BuzzFeed, Parenting, Good Morning America, and The Washington Post.

Can you store the bacon bin in the freezer?

Yes, you can. In fact, the freezer is the best way to store grease if you want to dispose of it once it’s solid. Also, it lasts longer in the freezer if you are saving it for later use.

Does it only come in red?

You can also get it in pink.

Is this bacon strainer sturdy for pouring hot grease into?

The bacon bin is thick-walled and stable sitting on the counter, so it won’t easily tip when pouring in hot grease. However, the silicone softens a bit, so you might want to let it cool before moving it.

Is it a good size?

Good is a relative term. It holds one cup, which many people find to be a perfect size, and others wish it were bigger. That being said, many brands sell larger ones, even up to six plus cups.

How fine is the mesh strainer?

It’s not mesh and not very fine at all. Each hole is about the diameter of a toothpick or about 1/16 inch. However, most people find that they don’t need it to be mesh for straining bacon grease. Some brands sell much finer strainers if that is what you’re looking for.

Can you get liners for the bacon bin?

No, there are no liners for this product. But it’s easy to clean and dishwasher-safe. And the grease should pop out easily once frozen if you want to discard it.

How long will the bacon grease last on the counter or in the refrigerator?

Bacon grease typically lasts around six months at room temperature if kept in a dark place. However, if you set it on the counter where sunlight gets to it, the grease will likely last one to two months. It should last one plus years in the refrigerator.

Does the lid fit tightly?

No, the pig face just sits on top. It fits nicely, but I wouldn’t say it’s airtight.

Can this bin be used for other greases?

Yes, it’s safe for up to 500°F. But I wouldn’t mix the greases if you plan on reusing them. Other kinds may not last as long or give the same flavor. On the other hand, go ahead and combine if you plan to discard the grease once it has hardened. You may also consider buying a second bacon bin.

How easy is it to remove the grease if discarding?

It should pop right out if you freeze the grease first. But you will probably have to spoon it out if you store it in the refrigerator. It will still be in a solid form but softer.

The Talisman Designs Bacon Bin gets very high reviews, and you can sum up what people like about it in a few sentences:

However, a few people didn’t like it, or they thought it was okay but had a few ideas for improvements:

I think I will have to get one of my own. But until then, I still have a few thoughts.

I never thought I would want a bacon grease strainer. I was okay using an old pickle jar, and it didn’t bother me that the grease had little bits of bacon. In fact, I always ate the bits that were big enough before pouring the grease into the jar.

I still don’t know if straining the grease is important to me. Well, to be honest, it’s probably not. I’ve never had bacon grease go rancid, which seems to be one of the reasons for straining.

The one cup size seems just right. I don’t get why people want ones that hold six or more cups. Who uses that much bacon grease anyway?

Unless you are deep or shallow frying with it, I can’t imagine anyone would need that much.

Well, you might make a bunch of bacon all at once and then not make it for a long time.

But I make bacon a few times a week, so I’m continually replenishing whatever bacon grease I use in between. And I rarely make more than 3-4 slices at a time.

I like that it would take up less space in the refrigerator, though probably not that much less.

I also like that it’s cute and unique, but it wouldn’t be a driving factor in buying. And I doubt I would name it.

One other thing I like is that it’s silicone, not glass. Occasionally, I make a whole package of bacon, and I’m not comfortable pouring that much hot grease into a glass jar all at once. So, silicone solves that problem.

If I have any concerns about the Talisman Designs Bacon Bin, it’s that the silicone gets soft and flexible after you pour in hot grease. I am used to putting the jar back in the refrigerator immediately, and it seems like I would need to let it cool first before picking it up. I’m also used to the lid fitting tightly.

However, I mostly like it. In fact, I like the Bacon Bin enough to recommend it. But only if you want to strain your grease, you’re tired of using whatever you use now, and you are looking for something on the smaller side. If that is you,

Hopefully, you have a better idea if it’s something you would like.

Talisman Designs is a reputable company with many experts endorsing them. Their kitchen gadgets are fun and unique, including their Bacon Bin.

It’s on the smaller side, which bothers some people. However, others find it to be just right.

Because it comes with a strainer, you can separate the impurities that make grease go rancid and possibly affect the flavor when cooking.

Freeze the grease if you don’t plan to use it, so it will be easier to discard (though not everyone found that to be true).

And store it at room temperature or in the refrigerator if you use bacon grease when cooking. It prefers the dark, though.

Even though I don’t have one yet, I can recommend this product if you are looking to have a small designated container for bacon grease or if you want to strain it.

If you have been using a tin can, coffee mug, or glass jar, and you’re ready to try the Talisman Designs Bacon Bin,