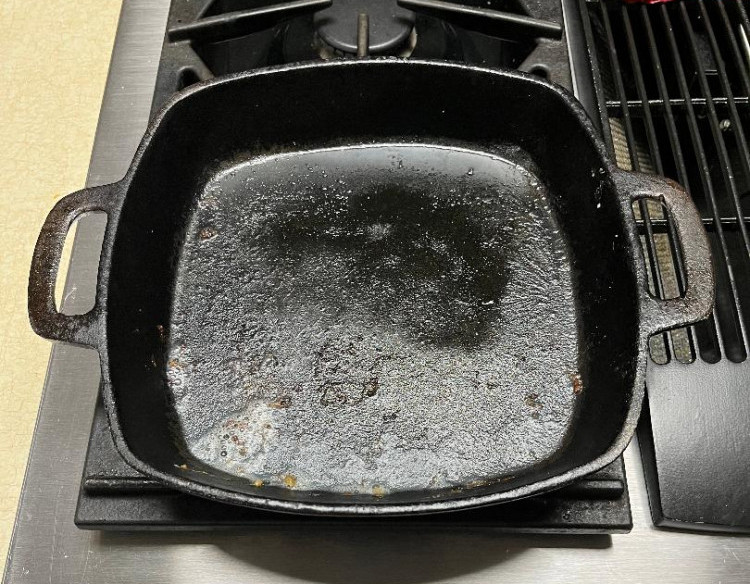 Let’s say you like to cook in bacon grease for supper and again at breakfast.

Can you leave the bacon grease in your pan overnight?

It sure makes things easier.

Someone asked this question, and maybe you are wondering the same thing.

Can I Leave Bacon Grease in My Pan Overnight?

I suppose if you continually leave your bacon grease in the pan without ever cleaning it out, it is likely to go bad quicker than if you had stored it.

However, it is easier to leave it in the pan if you are comfortable doing so.

That being said, when fat goes bad, it is often called rancidity. The fat molecules break down and oxidize, and the grease will smell and make your food taste bad.

Rancidity won’t necessarily make you sick, but it doesn’t mean you want to use rancid bacon grease.

The best thing to do is discard it.

Get rid of it in a sealed container or after the grease has solidified.

How Long is It Safe?

Bacon grease you have rendered yourself has a pretty long shelf life.

However, I’m not sure how to determine how long bacon grease that’s been sitting in your pan is safe.

According to Foodiosity, it will be good for longer than a week.

They still recommend storing it in an airtight container, though, and out of direct sunlight (pantry, cupboard, or refrigerator).

On forums, a few people always leave the grease in their pan, not just overnight. And all claim they don’t get sick from it.

I understand; the heat sanitizes your pan, not hot water (or dish soap).

You probably have nothing to worry about if you just leave it overnight and then discard or store the grease after breakfast.

But continually leaving grease sitting in your pan seems like a bad idea, though I can’t back it up with any hard facts.

And since people actually do it with no side effects, it must be safe enough.

However, if it has an off-smell, I would discard it. It’s likely gone rancid.

Furthermore, if you see any mold (which is unlikely), you should also get rid of it.

Ways to Store Your Bacon Grease

The most common way to store bacon grease is in the refrigerator. It will last up to a year or longer if it’s in an airtight container.

Many people continually add and take out bacon grease from the same jar for years. I would probably do it this way.

So, it’s hard to know exactly how old your grease gets when you do it this way, but it’s probably not something to be overly concerned about.

Storing bacon grease at room temperature is another way. It’s better to keep it in a cupboard or pantry and out of the sunlight. Again, make sure it’s in a sealed container.

However, storing it on the counter is also okay. And putting it in a jar or container with a lid is better than leaving it sitting in your pan.

Sometimes, you might want to store your grease in the freezer. I’ve heard it will last two years all the way to indefinitely.

So, as a conservative estimate, bacon grease in a sealed container lasts:

The most economical container is an old glass jar with a lid. I use old pickle jars.

However, many people want to strain their bacon grease.

You can use a mason jar and cheesecloth or coffee filter if this is you. Or buy a container with a built-in strainer like in the video below.

The main reason to strain your bacon grease is to get the bacon bits out and have pure fat for cooking.

Though some people prefer to have the bacon bits in whatever they cook next.

Whatever you decide is fine.

As you can see, it is okay to leave bacon grease in your pan overnight.

It won’t hurt or help the pan or the seasoning, and it will keep things simpler.

However, most people feel more comfortable storing their bacon grease in the refrigerator.

They are concerned with rancidity, and want to use their grease over and over. It will also last longer in the refrigerator than being left in the pan or jar at room temperature.

Rancidity isn’t harmful, and it won’t make you sick, but it will smell and make food taste bad.

You can decide what works best for you.

Although I don’t recommend continually leaving bacon grease sitting in a pan, some people do it with no ill effects.

But if you just want to leave your bacon grease in the pan overnight and use it again the following morning, it will be fine.

Or if you would like to find out more about a container with a built-in strainer, check out my Talisman Designs Bacon Grease Strainer Review.