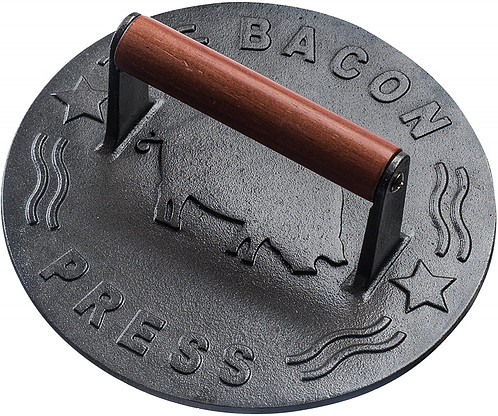 Are you tired of your bacon curling or taking so long to cook?

I mean, babysitting bacon can sometimes be a real chore.

One solution is to use a bacon press. You place it on top of the bacon while it’s cooking, and waLAH, you have flat, straight bacon in half the time.

What is a Bacon Press?

A bacon press is a heavy weight you set on top of your bacon while cooking. It’s generally made of cast iron and has a handle on top. A bacon press has four primary purposes: to aid in cooking your bacon evenly and faster while keeping it flat and straight. Less splatter is also a plus. However, a bacon press has other functions as well, from searing meat to grilling sandwiches.

Bellemain means “beautiful hands” in French. It’s a website-based company that specializes in kitchen tools and products. Bellemain began in 2007 and is situated in the Metropolitan New York area.

Bellemain prides itself in offering the very best products at affordable prices. The team takes everyday kitchen products people use and finds ways to make them better through their own design and innovation.

They hope that having Bellemain products in your kitchen will make cooking easier and the space more organized. They stand behind every product they make, which is why they offer a 5-year limited warranty.

You can buy products from the website, at Amazon and other online avenues, or in stores such as Walmart and Target.

What is the best size pan for the bacon press?

Can you use a splatter screen?

You can’t use a splatter screen because the handle is in the way. But you won’t really need one because you will have much less splatter when using the bacon press.

Is it okay to use soap when cleaning it?

You can use a little dish detergent, but it isn’t necessary. Many people prefer never to use dish soap on cast iron because they believe it hurts the seasoning. This is a myth. You should not have any rust as long as you dry your bacon press completely and add a thin layer of oil as needed.

Can I use it for other things besides bacon?

Do I have to season it before I use it?

The bacon press comes preseasoned, so you don’t have to season it before you use it. However, Bellemain recommends that you do it to get another layer of seasoning. The seasoning is what protects the cast iron from rust. Instructions come with the bacon press. Basically, you heat oil in a skillet, add a thin layer of that oil to the bottom of the bacon press, and set the press in the hot oil for 20 minutes. Turn off the heat and let it cool in the skillet when the time is up. Wipe any excess oil off, and you are good to go.

Will I need to flip the bacon?

Some people don’t, but most people do. You can try it both ways and see which way you like better.

Is a cast iron skillet necessary, or can I use the bacon press in a nonstick pan?

You do not need a cast iron skillet, but Bellemain recommends you don’t use it in nonstick. However, some people do anyway, with no problems. So it’s more of a precaution. Only use nonstick if it’s your only choice.

It is cast iron, so it will rust if you don’t take care of it properly. The polymerized oil (seasoning) protects the iron from air and water, the two things that can cause the iron to rust. So, keep your bacon press dry, and make sure it stays seasoned.

Does the handle really stay cool?

Compared to the cast iron, yes. However, the handle will eventually get hot if it is over the heat for too long.

How much quicker will my bacon cook?

It should cut the time in half. You generally cook bacon over low to medium heat, and it takes about 8-10 minutes for regular-sliced. With a bacon press, it will only take about 4-5 minutes.

How to Season a Bacon Press

The Bellemain cast iron bacon press gets very high reviews. The things people most like are:

Not everyone had the same experience. The biggest complaints among a small minority were:

I don’t have a bacon press, but I think it sounds interesting. However, I don’t know if I want one.

Even with all the high reviews, I still think it has to be something you will find useful.

So, I would recommend it if you like the idea of having flat, straight bacon that will cook more quickly.

And if you like grill marks or the fact it will help your cheese melt more fully on a grilled sandwich.

Or if you make lots of smash burgers.

Since I’m currently happy with how my bacon turns out, and I already have a way of melting the cheese on a grilled sandwich, these reasons are not compelling.

And I’ve never made smash burgers. But if I did, I can see how this would be a handy tool.

It has a stay-cool handle that may not stay cool indefinitely, but it sounds like it does a pretty good job.

I like that it’s round and will fit inside a 10-inch or larger skillet. And that it has a ridged side for those who want grill marks.

However, I don’t like that it would be another kitchen tool taking up space in my kitchen. And I’m not convinced I would use it. But I’m open to changing my mind in the future.

Bacon presses, in general, may have a bit of a learning curve if you are not familiar with cast iron. Cast iron isn’t hard to take care of unless you don’t know what you’re doing.

Following directions include seasoning it on the stovetop before using it, always making sure it’s dry after cleaning, and not cooking with it in a nonstick pan.

Some people remove the handle and season it in the oven to get the bacon press black and seasoned quickly. However, the packaging advises against it; I’m not sure why.

So, being fully aware of the potential problems, if it still sounds like something you would like

Check it out here.

Lots of people eat bacon but can find it to be unruly while cooking. Others don’t like how long it takes to make.

The Bellemain bacon press takes care of both of those problems. An added bonus is you get significantly less splatter.

It has many other uses as well.

Others like making smash burgers, or getting a better sear on their meat.

A few even like that it makes grill marks on meat and sandwiches. They say grill marks look more like how a restaurant makes it.

If any or all of the above reasons sound appealing and you think you would like to have a bacon press, I recommend the Bellemain.