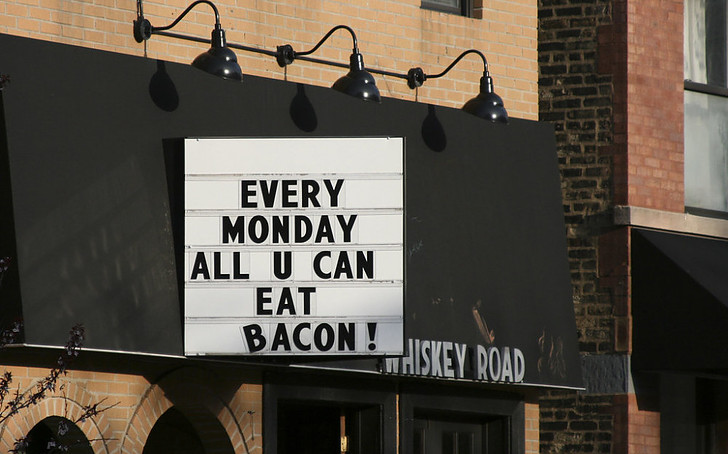 Have you ever wondered what makes bacon taste so good?

Bacon is a small strip of meat mixed with fat from the pork belly.

And when you fry it up, it tastes delicious.

Whether you eat it crispy or limp, it’s hard to compare when you cook bacon the way you like it.

But why does it taste so good?

Why Does Bacon Taste So Good?

Several factors contribute to why bacon tastes so good. It’s a combination of science, the way manufacturers make it, and how you like it. The science behind bacon’s great flavor is the ratio of fat to meat, its aroma and umami taste, and the Maillard Reaction. When you smell and eat bacon, the flavor compounds send signals to your brain, and you perceive it all as flavor. The bacon industry smokes and cures the pork belly with salt, sugar, and sodium nitrate (or nitrite), which preserves the meat and enhances the flavor. And last but not least, bacon tastes good when it’s cooked the way you like it.

According to Barb Stuckey, author and food developer, up to 95% of what we perceive as the flavor of meat is really its aroma.

Our navel cavity has thousands of chemical receptors that detect odors and send signals to the brain when breathing in through your nose.

And the same thing happens when you chew your food. Hundreds of aroma compounds send signals down through the throat and end up at the same place in the brain.

Umami (ooh-MOMMY) is a Japanese word that means “deliciousness.” Dr. Kikunae Ikeda, a Japanese scientist, first discovered this taste in 1907.

However, the scientific community didn’t officially recognize umami as an official taste until 1990. That’s when it became the 5th taste in addition to sweet, salty, bitter, and sour.

Even though umami is a taste, it is subtle and more recognizable when combined with other factors such as curing, aging, fermentation, and ripening.

Umami is a meaty or savory flavor created by free-form glutamate. This amino acid only produces the umami taste when other amino acids don’t bind it.

A variety of foods have glutamate, including most meats.

Meats have a subtle umami taste, but when you combine it with other factors such as fat, browning, or curing, the umami flavor really comes out.

A few common foods we all know are:

3. The Fat to Meat Ratio

According to a study at Purdue University, “fat should be considered the sixth taste and can be called oleogustus.” Not so much because fat itself tastes good, but the fatty acids in food break down and yield many flavorful compounds.

Scientists say that our desire for meat is often a craving for fat, especially when mixed with an umami taste.

Furthermore, when you cook bacon, the fats oxidize and create delicious aromas, and your mouth starts to water.

And that leads to the next factor.

When you brown fat and umami together, you create the Maillard (My-YAR) Reaction.

Or a better way to put it is the Maillard Reaction that happens when cooking sugars and amino acids together. You find it with baked goods, cornbread, toast, searing meat, or even vegetables cooked in fat.

Basically, you will have this reaction whenever you brown meat in some type of fat.

The Maillard Reaction also creates tantalizing aromas, which in turn sends signals to the brain that this is something that will taste good.

Bacon starts with a pork belly. The workers cure the pork belly with salt, sugar, sodium nitrates or nitrites, liquid smoke, and water.

Nitrates slow bacterial growth and give bacon its pink color.

Next, the pork belly is heated at a low temperature to allow the flavor to permeate. And after heating, it must cool down before slicing.

Once the workers slice the pork belly into strips of bacon, they package it and send it off to grocery stores like yours.

You buy some and take it home to fry.

While frying, the water comes out of the bacon and causes splattering.

But it’s worth it because you now get to eat it.

You can even make your own bacon, but most people will buy it from the store because it’s easier than making it themselves.

Either way, cooking it the way you like it is the key.

You can learn all about the science of what makes bacon taste good, but if it’s not cooked the way you like it, you won’t enjoy it as much.

Some people prefer crispy bacon, and others like it limp. Furthermore, many would rather have thick slices while others want thin.

I like mine thin and crispy. How about you?

A handful of people who don’t want their bacon cooked at all and would rather eat it raw. Is this even safe?

The Science Behind Why Bacon Tastes So Good Video

As you can see, many factors go into why bacon tastes so good.

One is the aroma. And what the smell of bacon cooking tells your brain.

Another is the umami taste. Because we cure bacon, you will get a stronger umami flavor.

Third, the ratio of fat to meat produces many flavor compounds, and fourth is the Maillard Reaction that happens when you fry the bacon.

The fifth and sixth factors have to do with how manufacturers make bacon and the way you cook it. Curing enhances the flavor and making it the way you like it will affect the mouthfeel as well as how your eyes perceive it.

We use many of our five senses when eating bacon or any food, though we rarely think about it that way. Most of us only care that it tastes good.

You, however, now know why.

What did you find most surprising about the reason bacon tastes so good?