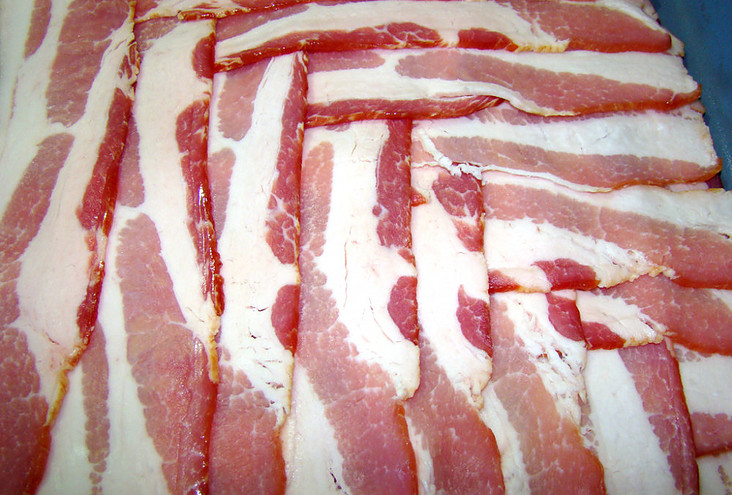 Have you ever wondered if it was okay to eat your bacon raw?

You might think the curing process in bacon will kill all the pathogens you might otherwise find in raw meats.

We all know that some meats, such as beef, don’t need to be cooked on the inside. And other meats, such as chicken, need to reach an internal temperature before it’s safe to eat.

But what about bacon? Is it safe to eat raw or undercooked? Or will it make you sick?

Can I Eat Raw Bacon?

Although it is relatively safe to eat raw bacon, it is not common. Raw or undercooked bacon will increase your risk of foodborne illness, also known as food poisoning. In fact, all raw or undercooked meat carries this possibility and is considered unsafe by experts. On the other hand, since we cure bacon with salt and nitrate, and the USDA inspects pigs in the United States (other countries may have similar standards), the chances of getting sick are slim.

What Experts Say About Raw Meat and Foodborne Illness

Some of the experts cited pertain only to the USA. Other countries have their own safety standards that may or may not be the same as the United States.

According to Healthline, eating undercooked or raw meat increases your chances of getting food poisoning. Raw meats may have harmful pathogens: viruses, bacteria, and parasites.

Bacon doesn’t spoil as quickly as other raw meats because of its additives, mainly salt, and nitrates. The salt prevents the growth of some bacteria, and nitrates protect against botulism.

However, that doesn’t mean you can’t get sick from eating raw bacon. The chances are slim, though.

Common foodborne illnesses linked to raw or undercooked pork include:

The CDC estimates that 48 million people get food poisoning, 128,00 are hospitalized, and 3.000 die each year.

According to the National Library of Medicine, 800 foodborne disease outbreaks are reported each year in the United States. They account for approximately 15,000 illnesses, 800 hospitalizations, and 20 deaths.

Those more at risk of getting a foodborne illness are older adults, young children, people with weakened immune systems, and pregnant women.

According to the Food Safety and Inspection Service of the USDA, all “streaky” pork bacon found in retail stores has been inspected by the USDA (United States Department of Agriculture) or by state systems that have equal standards to those of the Federal government.

Each bacon package in the store will say, “U.S. Inspected and passed by Department of Agriculture.”

Let’s look at the risk of one parasite

Trichinellosis, also known as Trichinosis, is a parasite that the USDA looks for when inspecting each pig.

You commonly find Trichinellosis in pigs and wild boars.

However, inspectors found this parasite more frequently before the government passed a mid-20th century law prohibiting farm-raised pigs from being fed raw-meat garbage.

As you can see, this parasite is not much of a problem nowadays.

Overall, the experts still say it’s unsafe to eat raw bacon. And that cooking will ensure you kill all bacteria, viruses, and parasites.

What People Say About the Safety of Eating Raw Bacon

People are divided on whether it’s safe or not to eat raw bacon.

It’s safe, and I would eat raw bacon

A few say it is safe and site various reasons such as government inspections or safety food standards today. They say things like:

Others also think it’s safe because either they eat raw bacon or know someone who does.

One person pointed out that bacon isn’t really raw if you cure it. And a couple of people did compare it to ham because it’s also cured. However, ham comes pre-cooked and bacon doesn’t, making bacon raw even though it has salt and nitrate additives.

Raw bacon is unsafe, and I wouldn’t eat it

Those who thought it wasn’t safe also cited government agencies and listed the symptoms of food poisoning or just stated it wouldn’t be worth it.

You can eat raw bacon, but why would you?

The rest agreed that it was okay to eat raw bacon but not worth it for one of two reasons: the taste or the risk of getting sick.

I think eating raw bacon is relatively safe. The government has put in place standards that make it difficult for a diseased pig ever to be used to make bacon or any other pork product.

However, I also think we have food safety standards for a reason, and we should consider them.

The bacon may be safe, but you also must handle the meat in the right way: refrigerate, pick up with clean hands, don’t cut with a dirty knife sitting out, etc.

Not following those rules can also lead to food poisoning.

I used to work in a high school kitchen, and we had to follow lots of rules. They were necessary for the safety of the students and faculty. It made sense to me.

But I didn’t follow all the same rules at home. Some food safety standards were burdensome and the risk so small that I thought they weren’t necessary for my own kitchen.

And that’s the way I look at the government agencies such as the CDC and USDA. They have to cover every possibility regardless of whether the chance of getting sick is great or minuscule. And I’m glad they do it.

But a person can choose not to follow some of the precautionary rules in their own homes, especially when the chances of getting sick are unlikely.

That being said, I don’t understand why someone would want to eat raw bacon. I agree with the person who says cooked bacon tastes so good. And for me, raw bacon doesn’t look appetizing at all.

Plus, it’s expensive so eating it raw seems like such a waste.

Eating raw bacon is uncommon for a reason.

And when looking at Youtube videos, I realized just how odd it is. However, should you want to try it and are looking for a somewhat creative way, watch the video below.

What If It’s Frozen?

Will freezing the bacon make it even safer to eat?

No, freezing does not kill pathogens; it simply slows the growth while it’s frozen.

So, eating frozen raw bacon wouldn’t be any different from eating it thawed.

In other words, the only way to be sure you kill all bacteria, viruses, and parasites is to cook your bacon.

As you can see, the experts advise against eating bacon raw while also saying the risk of getting sick is minimal.

Plus, you read about people who do eat it raw and haven’t gotten sick. That’s not to say they never will, but eating raw bacon is safe from their point of view.

So, can you eat raw bacon?

Only you can decide if you think it’s worth the risk. Chances of getting sick may be small, but they’re not non-existent.

So, what do you think? Are you part of the crowd that says: