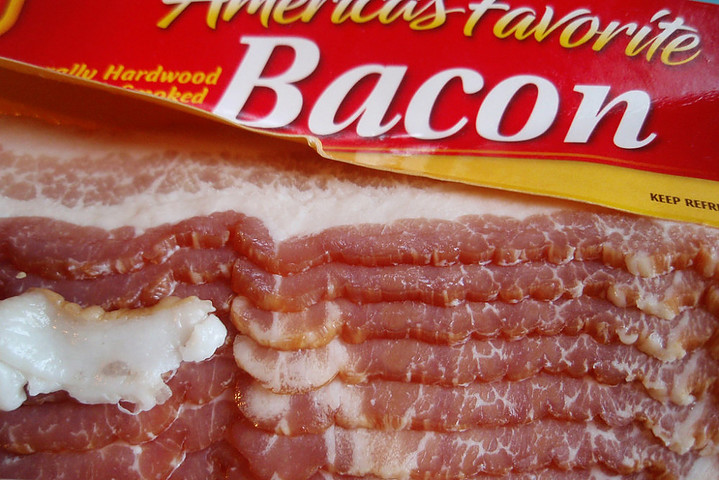 Have you ever thought about how bacon is made and whether it is healthy or unhealthy?

There’s no doubt that millions of people like to eat bacon, and you may be one of them.

However, you find people on both sides of the aisle when it comes to whether it’s healthy or not.

So, let’s look at how bacon is made and what some experts have to say.

Do You Know How Bacon is Made?

Bacon is salt-cured pork belly. The pork belly goes through seven steps before it becomes bacon. Step one is removing the skin from the pork belly, and step two is curing it. Moving on, step three is a liquid smoke shower. Step four is heating the pork bellies, and step five and six is chilling and stacking them. Lastly, step seven is slicing and packaging. When it’s all said and done, you have bacon.

Although there are other types of bacon, I am describing pork bacon made in the U.S. from pork belly.

According to the USDA’s page on Bacon and Food Safety, bacon is “the cured belly of a swine (hog) carcass.” Bacon mainly comes from young pigs 6-7 months old, weighing 175 and 240 lbs.

Most bacon sold in the U.S. is “streaky” bacon which is long narrow slices of pink meat and white fat cut from the hog’s carcass.

Bacon’s history dates back to 7000 B.C. in the middle east with the domestication of pigs.

However, it didn’t become the bacon we know (salt-cured pork belly) until the 17th century, when certain breeds of pigs were grown specifically for making bacon.

The Seven Steps for Making Bacon

I will go into a little more detail about each step based on the video below.

Pork bellies are put in a tumbler to soften them, making the skin easier to remove. They are then placed on a conveyer belt (skin side down) and go through a machine with a long automated blade that separates the skin from the pork.

The pork bellies continue on the conveyer belt and go through a flipping machine so workers can trim off any remaining excess fat. From there, they go under an injector head, and many tiny needles inject the salt solution, water, and liquid smoke into the meat.

After being injected with the brine solution, workers place a metal hanger called a cone into the end of each pork belly for hanging. They are hung on a rack and put into a drench cabinet to get a liquid smoke shower. The shower adds flavor and color to the surface of the pork.

Someone then moves the rack to a large oven to bake for 5-6 hours at a low temperature. Heating allows the flavor to permeate the pork belly.

From the oven, it goes into a freezer for quick cooling and then into a large cooler for a couple of days. The cooling process firms up the meat and makes it easier to slice.

Before the workers can stack the pork bellies, they must remove the metal hanger and put the meat back on a conveyer belt. The sides of the pork get one last trimming in the sizing station and run under a metal detector to make sure no metal is left in the meat. When finished, the pork bellies are stacked on pallets, wrapped, and put in the freezer until they’re ready to be sliced.

When the bacon is ready to be sliced, a worker puts pork bellies into chutes that move back and forth over a blade. The blade cuts the pork belly into strips. The video shows how the strips are baked (for pre-cooked bacon) and packaged. However, raw bacon just gets packaged.

BACON – How It’s Made Video

Besides how delicious bacon tastes, those who claim it is healthy will tell you bacon:

There is no scientific data to support any of those things, though.

According to Healthline, though, bacon is both good and bad for you. Here is one healthy reason, and three more neutral reasons:

1. Bacon is reasonably nutritious – it’s rich in several nutrients such as protein and many B vitamins

3. Bacon has a lot of salt – but the portions are typically small, so it’s not a problem unless you are sensitive to salt. However, a diet high in salty foods can raise your blood pressure. So, moderation is key.

4. Bacon has nitrates – when fried, the nitrates form compounds called nitrosamines, which are carcinogens. However, many bacon producers now add vitamin C, which substantially reduces nitrates.

Those who eat only healthy foods will tell you that bacon is unhealthy because it is processed.

They say that observational studies consistently show that processed meat can be linked to heart disease and diabetes. And several types of cancers, specifically colon, breast, liver, and lung.

But does that mean you should never eat bacon?

Only you can decide that. Weigh the factors and figure out what risks you are willing to take.

Overall, bacon eaten in moderation should be okay.

This is How Bacon is Really Made Video

As you can see, making bacon is quite the production. It begins as a big slab of pork and ends up in thin slices.

In between, it is cured, heated, and cooled.

I’ve heard many people say that bacon is unhealthy. But some of the things they say that make it bad for you are not necessarily a problem anymore, such as its high fat and salt content or the nitrates.

However, it is processed. Processed foods will always be less healthy.

On the other hand, bacon is also full of nutrients. So, it has that in its favor.

And that’s why you can say that bacon is both healthy and unhealthy.

For me, eating bacon in moderation seems reasonable.

What about you? Do you eat bacon?

Does finding out how it’s made or its risk factors make you more or less likely to keep eating it?