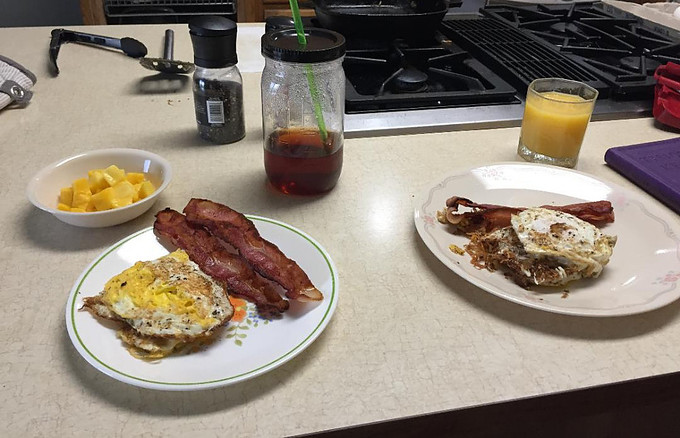 Have you ever wondered why we eat bacon and eggs for breakfast?

It’s not that you can’t eat it for lunch or dinner, but you’ll most likely think of it as having breakfast, just at a different time.

Let’s face it. People think of bacon and eggs as breakfast.

However, it wasn’t always that way.

When and how did we start?

Why Do We Eat Bacon and Eggs for Breakfast?

Even though eating bacon or eggs goes back much further in history, eating them together for breakfast wasn’t popularized in America until the 1920s. Edward Bernays used his expertise in marketing and propaganda to convince Americans that eating a heavy breakfast was better for their health. He found 4500 doctors who agreed that a breakfast of bacon and eggs would help restore nutrients people lost while sleeping and give them more energy during their workday.

The story of why we eat bacon and eggs for breakfast begins with Beech-Nut Packing Company hiring Edward Bernays to increase their bacon sales.

A Little Background on Edward Bernays

Bernays served on the Committee on Public Information during World War 1. Part of his job was to gain public support for the war effort, and what he learned during those years benefited him later.

Further influencing him was his uncle, the famous Sigmund Freud.

In a 1986 interview conducted by a researcher for Ball State University, Bernays said, “When I got back from the war, I realized ideas could be as important weapons as anything.”

So, after the war, he went into business as a “counselor of public relations” and offered his services to companies.

Companies would hire Bernays to sell a product or service. He was good at his job and had the uncanny ability to change consumer perception and behavior. This ability made his clients lots of money.

His biographer was Larry Tye. In his book, The Father of Spin, Tye wrote “Hired to sell a product or service, he instead sold whole new ways of behaving, which appeared obscure but over time reaped huge rewards for his clients and redefined the very texture of American life.”

When Beech-Nut hired Edward Bernays, they wanted to increase their bacon sales.

Bernays discovered that Americans were typically eating a light breakfast that consisted of maybe a roll, orange juice, and coffee.

So he went to his company’s physician to find out if eating a heavy breakfast would be better for people’s health. Bernays reasoned that people would lose energy overnight that they needed for the next day.

The doctor said yes, a heavy breakfast would be better.

After explaining why he wanted to know, he asked the doctor if he would write to 5000 physicians to find out if they also agreed.

The doctor was happy to do it, and they sent out a letter.

At least 4500 physicians all said a heavy breakfast would be better, and many even said that bacon and eggs should be a part of that breakfast.

Bernays publicized the results in newspapers and headlines, stating that a heavy breakfast of bacon and eggs was “scientifically desirable.”

Can you pick out Bernays tactic that may have been more propaganda than science?

Whether you agree or disagree with the way Bernays helped his clients, one thing is clear; we continue to use these tactics today, and they do indeed work.

He was right when he said, “Ideas can be used as weapons.”

Like I said before, Bernays was good at his job. He also thought propaganda was useful. However, not everyone agrees with his methods. Some say he only cared about the bottom line, which was making his clients money.

If you would like to understand Edward Bernays’ use of propaganda better, read his short book, Propaganda (published in 1928) on the “History is a Weapon” website.

Getting back to bacon and eggs for breakfast, pretty much everyone thinks they go together.

The Reason Bacon and Eggs Go Together

Aside from the fact that Edward Bernays and multiple doctors told us it did, are there other reasons?

Not really, but there are several thoughts that people have.

Is a Bacon and Egg Breakfast Healthy?

According to Livestrong, bacon and eggs are a “classic old-school breakfast” for a good reason.

They say, “Starting your day off with protein helps regulate your blood sugar after your long night’s fast and keeps you full for longer, while the protein helps feed and maintain your lean muscle tissue. The calories and saturated fat in bacon might give you pause, but indulging in bacon and eggs for breakfast a few times a week can definitely be part of a healthy, hearty diet.”

A single serving of bacon (2 slices) has:

Together they make a hearty breakfast that will keep you full for longer and provide essential nutrients. For that, Edward Bernays and the doctors were right.

And you can even make them in the same skillet.

Why Bacon and Eggs Tastes Better in Cast Iron

I am convinced that bacon and eggs taste better when cooked in cast iron.

I can’t really explain why.

But you do get better browning in cast iron because it retains its heat so well. And browning, also called the Maillard Reaction, adds flavor.

Of course, you can also get the Maillard Reaction with other metal cookware.

So, I can’t back my belief up with science.

However, I am not alone in thinking that bacon and eggs (or many other foods) taste better in cast iron.

We mainly started eating bacon and eggs for breakfast during the 1920s when Edward Bernays intentionally pushed it in the media.

He found 4500 doctors who recommended eating a heavy breakfast of bacon and eggs and promoted their recommendation to the public.

Although he claimed it was scientific, it was merely his idea and way of helping his client sell more bacon.

There were no scientific studies, only doctors who were in it for the money (as some would say).

Today, we accept that bacon and eggs go together.  They are a hearty and reasonably healthy way to start your day.

Ironically, science backs this up.

How about you? Do you eat bacon and eggs for breakfast?