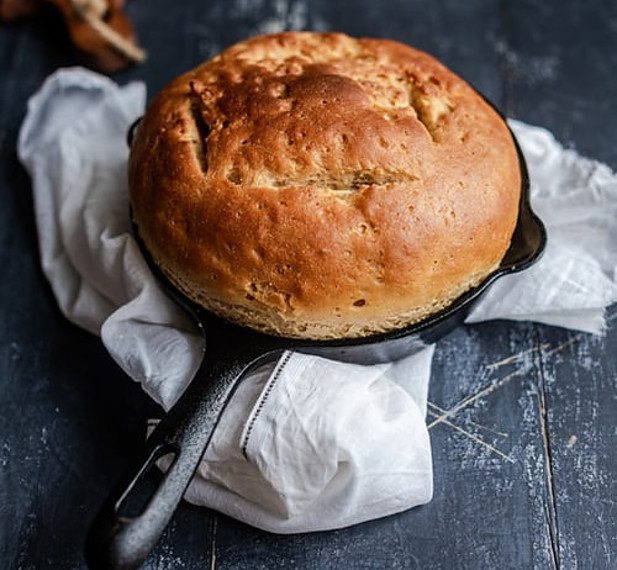 Have you ever asked, “Why does cast iron make food taste better?”

Maybe you’ve even wondered if it’s true or if it’s just a claim that some people make.

Admittedly, this claim sounds subjective, and not everyone will agree.

But, what if there is some science to back it up?

The main reason people say food tastes better when made in cast iron has to do with its ability to retain heat. This means cast iron cooks certain foods better, but it doesn’t mean cast iron makes food taste better. Because of its heating capacity, you can quickly get the Maillard Reaction when searing steaks and get crispier pancakes. Other factors include its ability to cook evenly when the pan is heated correctly, the science of thermal capacity, and psychological effects.

Many people who say cast iron makes food taste better are thinking of its ability to retain heat.

When you ask them how it does that, they say things like, “Cast iron heats slow. However, the same properties that make it slow to heat up also keep it hot, and that’s when the real magic happens.”

Or, “Cast iron improves flavor via its unique ability to stay hot…making conditions most conducive to creating new flavor compounds.”

And one more, “Because cast iron can be heated to a hotter degree, the rate of cooking changes, which may affect the taste.”

You don’t need cast iron to get the Maillard (My-yar) Reaction; you need heat.

On the other hand, cast iron is ideal since it gets and stays hot in a way that isn’t true for all cookware.

The Maillard Reaction is defined as a “chemical reaction between amino acids and reducing sugars” that give the brown crust on foods such as steak, bread, and toasted marshmallows.

Or, as one person says, It’s “where flavors get together and make flavor babies.”

It’s the reason we brown foods; because browning equals flavor.

Searing a steak is one thing that people think cast iron does better than anything other cookware.

And that’s because it does an outstanding job creating the Maillard Reaction and producing the brown, flavorful crust.

When people say that cast iron makes food taste better, they are often thinking of the Maillard Reaction.

That’s because browning (another name for Maillard Reaction) is one of the things that makes food taste so good.

Plenty of people think the idea that food tastes better just because it was made in cast iron is all in your mind.

They say, “It’s your imagination,” or purely psychological.

It’s true that many foods you cook in cast iron taste no different if you make them in, let’s say, aluminum or stainless steel.

Cast iron doesn’t have magical qualities, but that doesn’t mean it’s not better for specific ways of cooking.

For example, cast iron is not better for boiling pasta.

However, when it comes to browning, maybe it does have a leg up on the competition.

So, claiming that everything automatically tastes better when it’s made in cast iron is probably stretching it too far.

And if you think it does, it may be in your mind.

Or maybe you can call it preference.

The Science of Thermal Capacity

Thermal capacity, or ability to retain heat, varies depending on the material.

For example, aluminum will have a different thermal capacity than cast iron.

So, using these two metals, let’s compare the heating capacity of each.

If an aluminum pan weighs 2lbs at 300 degrees with a specific heat of 0.9, it contains

And if a cast iron pan weighs 8lbs at 300 degrees and has a specific heat of 0.45, it contains

This comparison shows that the cast iron pan is twice as hot as the aluminum one.

Furthermore, let’s consider what’s been said previously about the heat retention of cast iron being a significant factor in why food tastes better.

It’s not the cast iron that makes food taste better, but the pan’s thermal capacity that cooks food better.

In other words, if you are cooking food that benefits from cast iron’s ability to retain heat, then you will think it tastes better.

The Reason Why Cast Iron is a Game Changer

So, why does cast iron make food taste better?

The main reason has to do with its ability to retain heat, leading to new flavor compounds.

Cast iron is perfect for browning or the Maillard Reaction, which is all about flavor.

In addition, there is scientific data that shows its remarkable heating capacity compared to aluminum.

If you think it makes all food taste better, it’s either your opinion or, as some would say, all in your mind.

So, hopefully, you now have a better understanding of why some food does actually taste better when made in cast iron.

Not because the cast iron itself makes it taste better but because it cooks some foods better.