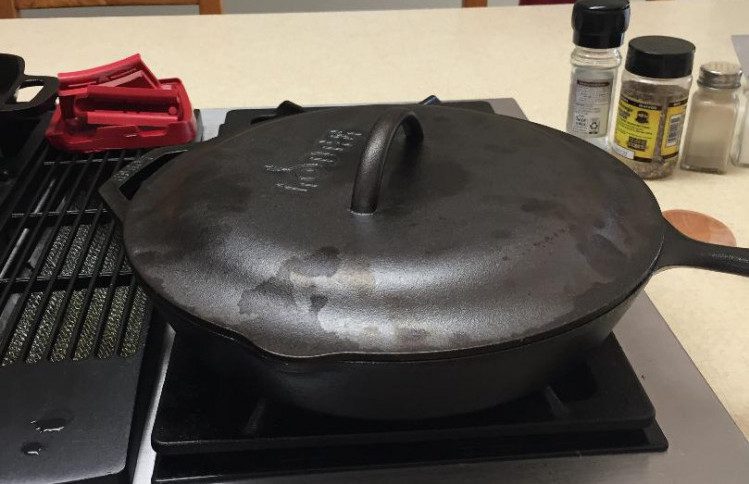 Have you been cooking with cast iron and wondered, “When should I use a lid for my cast iron skillet?”

Or your asking, “Do I even need a cover, and if so, which is better, glass or cast iron?”

Maybe you feel like a lid isn’t necessary, and if a recipe calls for one, you can just improvise.

It’s true; you can find ways to get around using a lid or come up with a makeshift cover that will serve your purposes.

But in general, having a lid is a good idea.

So, let’s go over some of the times you will use one, and from there, you can decide if you need a lid for your cast iron skillet.

When Should I Use a Lid For My Cast Iron Skillet?

There are at least three times when you’ll want to use a lid on your cast iron skillet. Mainly it will be when wanting to keep the heat or both the heat and moisture in the pan. Moist heat is used in several cooking methods and require a lid for all or some of the time. In addition, another time to use one is when you want to melt some cheese on top after the food is done cooking. Much of cast iron cooking doesn’t call for a lid, but having one available makes your skillet more versatile. If it’s also cast iron, it even can transform your skillet into a shallow dutch oven.

1. When You Want to Keep the Heat In

For example, you can use a lid to bring something to a simmer or boil quicker.

The wisdom of boiling water in cast iron is up for debate, with some claiming it weakens the seasoning.

I have no doubt that boiling water repeatedly or for long periods will affect the seasoning.

Nevertheless, people do boil water in their cast iron cookware.

Of course, once the water boils, remove the lid to add whatever food you are cooking, be it pasta, potatoes, or beans.

And for the most part, you will leave the lid off, so you don’t risk the water boiling over.

However, simmering is a bit different.

Again, you can put the lid on to get your liquid to the boiling point, but then you will lower the heat and remove the cover.

To prevent splattering, you can use a splatter screen, or if you’re sure the temperature is correct, you can keep the lid on.

But if you’re trying to thicken the liquid in the skillet, you’ll want the lid off so the moisture can escape.

2. When You Want to Keep in Both the Moisture and Heat

Steaming and braising are both cooking methods in which the food cooks slowly and is covered.

Rice is an excellent example because it needs both moisture and heat to cook. After the water has boiled, you add the rice, turn down the heat, and let it steam for 15-20 minutes.

It just so happens when I did it, though, my rice stuck to the bottom of the skillet and was a pain to clean.

However, if your skillet is well-seasoned (not newer like mine), you are less likely to have this problem.

Braising involves slow-cooking tougher cuts of meat such as brisket or chuck steak.

The moist heat breaks down the connective tissue, making the meat tender.

3. When You Need It For a Few Minutes to Melt the Cheese

When the last step to finishing is adding cheese to your skillet meal or burger, that’s a great time to add a lid.

First, remove the skillet from the heat source so your food doesn’t keep cooking.

The main advantages of having a cast iron lid for your skillet are:

The advantages of using a glass lid are:

Of course, if you have a dutch oven already, which comes with a cast iron lid, it might fit your skillet.

And some people have said they don’t bother with a lid, preferring to use aluminum foil or a baking sheet.

So, in the end, it comes down to preference.

When Not to Use a Lid

I don’t use a lid very often when cooking in cast iron because most of my cooking falls into the reasons not to use one.

Searing – any type of meat or seafood

When needing the liquid to evaporate

When wanting the sauce to thicken

A Few Practical Uses for a Lid

This meal calls for a lid at the end for melting the cheese. But before that, you are frying and thickening, so you wouldn’t want to use one.

Have all your ingredients ready before you start cooking because it moves pretty fast.

As you can see, using a lid on a cast iron skillet is pretty much the same as using one on any type of cookware.

So, if you were wondering, “When should I use a lid for my cast iron skillet?” hopefully, you now understand when and when not to use one.

Use a lid whenever you want to keep the heat or both the heat and moisture in the skillet.

Or to melt cheese on your food after it’s done cooking.

Although you can probably get by without a lid, having one gives you more cooking options.

Do you use a lid when cooking in your cast iron skillet?

If so, in what ways?