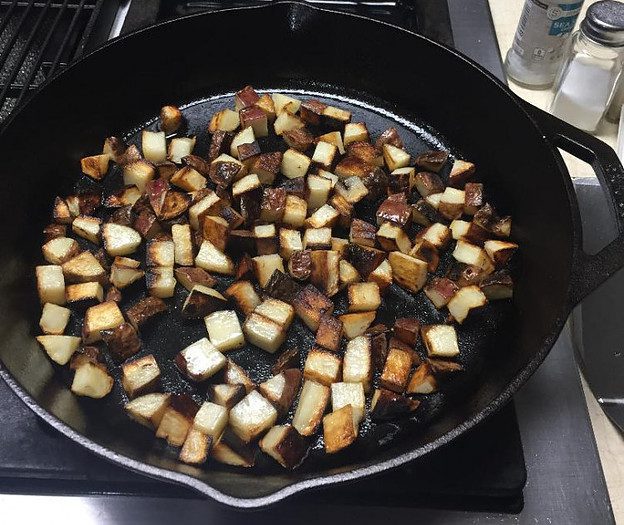 Fried potatoes are a great addition to almost any meal.

And if you’re like me, you want to make them in cast iron, but they stick.

So, now you’re asking, “How do I fry potatoes in a cast iron skillet without sticking?”

It’s relatively easy as long as you know to do a few simple things.

With that in mind, let’s get started.

How Do I Fry Potatoes in a Cast Iron Skillet Without Sticking?

Frying potatoes in a cast iron skillet without them sticking requires knowing a few things about cast iron and frying. First, you always need to preheat the skillet and the oil. This is what allows for browning and crispiness. In addition, you’ll want to use a high smoke point oil and start with dry potatoes. Never use a lid, and wait until the end to salt. Finally, put the potatoes in a single layer, and don’t stir them while they are frying.

Preheat Your Skillet and Oil

I can’t emphasize enough how important this step is.

Whether you preheat your skillet and then add the oil or heat the skillet and oil together, the important thing is they are both hot when you add the potatoes.

In other words, cooking the potatoes in a hot skillet with hot oil is the first step in making sure they don’t stick.

Preheat and cook the potatoes at medium heat.

Additionally, you won’t need much oil, but enough to cover the bottom of the skillet.

Use a High Smoke Point Oil

Since you are frying at a medium temperature but waiting for the pan and oil to get hot, you need an oil with a high smoke point.

The smoke point is the temperature at which the oil starts to smoke and burn.

When this happens, the compounds in the oil begin breaking down and give the food a burnt flavor.

Use the chart to choose an oil.

You can also see what oils Lodge recommends for different cooking methods.

Plus, check to see whether a specific oil is flavor neutral or will impart its flavor into your food.

I normally use grapeseed or Avacado.

The less liquid you introduce to the oil, the better because too much moisture will keep the potatoes from browning and crisping.

Additionally, any amount of water causes the oil to splatter.

There is moisture in the potatoes already, so you should expect some splatter, but there will be less if you dry the potatoes.

So, after you wash the potatoes, either dry them with a towel or let them air dry before cutting them.

My mom always sliced her potatoes when frying them, but you can cut them however you want.

Tonight, I am dicing them.

Wedges, sticks, and shredding, in addition to slicing or dicing (cubed), are all excellent options.

Don’t Use a Lid

It may be tempting to clamp that lid on the potatoes to keep the splatter inside the pan or to try and speed up the cooking process, but don’t do it.

Because condensation will build up inside, and you will get soggy, greasy potatoes.

A better option is a splatter screen.

Wait Until the End to Salt

The reason you wait until the end to salt the potatoes is that salt draws out moisture.

I’ve already explained what moisture does and why you don’t want it in your skillet with your potatoes.

Plus, I’ve heard it’s best to wait until the end to add pepper because pepper can burn and stick to the pan.

I haven’t noticed this to be a problem, though.

I will let you be the judge.

Put the Potatoes in a Single Layer

It may seem obvious that you wouldn’t just throw the potatoes in and expect them all to get that brown, crispy exterior.

Or maybe it isn’t that obvious.

Only the part of the potato that has contact with the oil and pan will brown.

However, if they are stacked on top of each other, you can guess what won’t happen (they won’t brown or crisp).

So make sure each piece has its own space.

Do Not Stir Them

Unfortunately, it may be tempting to want to stir them, but that’s a bad idea.

The potatoes will initially stick to the man.

However, if you leave them alone, they will release on their own.

Don’t stare at them, or it will seem like forever before they are ready.

In reality, they don’t take that long, but it may feel like they do if you’re just standing over them.

Go do something else, and if you’re afraid you will forget them, set a timer for 5 minutes.

How to Make Crispy Potatoes in a Cast Iron Skillet

If you’ve been asking how to fry potatoes in your cast iron skillet without sticking, you hopefully have a better idea now.

It’s really not difficult, but if you don’t know some of the tips above, you may end up with either soggy, burnt, or stuck potatoes.

So to recap, you will want to know these seven things:

Btw, the potatoes turned out delicious!

Let me know how yours turns out the next time you make them.