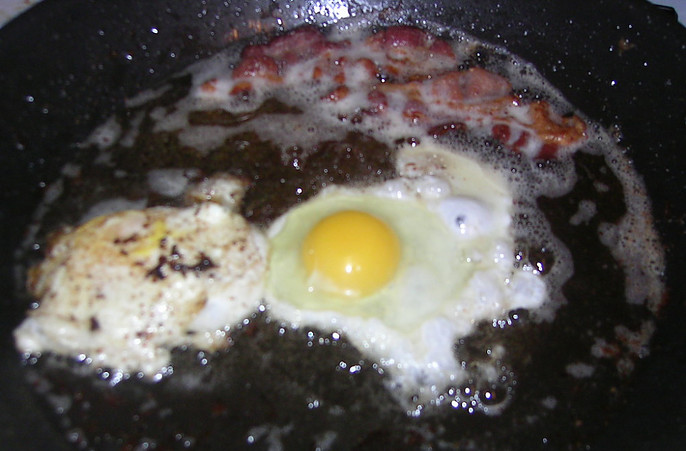 Are you wondering how to cook bacon and eggs in the same cast iron skillet?

Maybe you only have one skillet, or you just don’t want to dirty another one. Regardless of your reason for asking, you want to know the best way of doing it.

Someone else asked this same question.

They knew it was possible but wanted to know how other people did it so they could find the best way.

In this post, we will discuss several different ways to make bacon and eggs in a cast iron skillet, and I will share what I do.

How Do I Cook Bacon and Eggs in the Same Cast Iron Skillet?

Step 1: Start With the Pan

Before you cook the bacon, you must decide if you want to make it in a cold or hot pan.

Group #1 says to start with a cold pan and cook the bacon slowly. The fat will render at a slower pace and make better bacon.

If starting from a cold pan, your bacon will stick at first, so don’t try and move it. Wait until the fat has begun to render.

Group #2 says to preheat your pan first because getting the pan hot before you cook the bacon allows the bacon to get crispy, and you will have better bacon.

If preheating, heat your pan for 3-5 minutes on medium-low to low heat or until the bacon sizzles when it hits the pan.

Both ways claim their way gives you better bacon and takes the same amount of time. In a cold pan, your bacon will be in the pan longer, and in a hot pan, you will spend a portion of that time preheating the skillet.

Which one makes better bacon? They are about the same, in my opinion.

Hopefully, you’ve decided whether you will start with a hot or cold pan.

Whatever you decide, everyone agrees you cook the bacon first because it takes the longest. Cook it over medium to medium-low heat.

Here are a few tips others give:

Assuming you made the bacon first, you must decide if you will add the eggs while the bacon is finishing cooking or wait until after it’s done and removed.

How much bacon grease do you want? You’ll need to figure that out before you put the eggs in.

Some people like lots of fat and others like very little. Many fall somewhere in between. So, remove some or all of it unless you want the eggs cooking in that much fat.

Here are some tips on adding your eggs while the bacon is still cooking:

And if you make the eggs after the bacon is done and out of the pan, you cook them the same way.

Plus, some of the same tips apply.

For example, you can still break the eggs in a bowl ahead of time and scrape the pan, if desired. However, some like the flavor the crispy bacon bits add to the eggs.

Furthermore, you can fry or scramble your eggs.

How I Make My Bacon and Egg Breakfast

If you still aren’t sure how you want to make them, maybe knowing how I do it will help.

I’ve been making bacon and eggs in my skillet since I first started cooking in cast iron.

I’ve tried starting in a hot and a cold pan but settled on preheating my skillet first.

I also tried using a splatter screen and breaking my eggs in a bowl ahead of time, but I do neither now.

And I mainly cook fried eggs, but I occasionally make scrambled eggs or an omelet instead.

Here are my steps:

We have been eating bacon and eggs almost every morning for four years.

It might be kind of fun to cook our breakfast on a bacon and egg griddle like the one in the video below.

Lodge currently sells a newer Legacy version of one of these on their website (if they’re in stock).

You now know how to cook bacon and eggs in the same cast iron skillet.

It isn’t hard, but there are several things to think through.

For example, will you preheat your pan or start with a cold skillet?

Do you want to cook your eggs while the bacon is still in the skillet? Or wait until it’s finished and out of the pan?

How do you like your bacon? Crispy, limp, or somewhere in between? It may take practice to get it just the way you like it.

Do you want to eat your bacon warm and how do you plan to keep it that way? Leave it in the skillet or transfer it to the oven? Or maybe you’ll return it to the pan after cooking the eggs.

And how much grease do you want to cook your eggs in? Most people remove at least some of it unless they are only cooking one or two slices.

Finally, do you want your eggs to be fried, scrambled, or some other way?

Once you’ve figured these things out, the rest is just cooking.