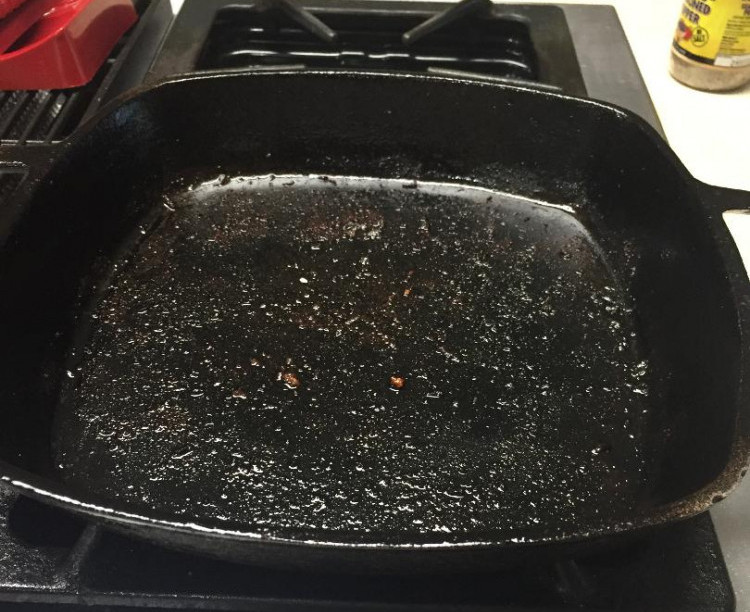 Bacon is a favorite thing to cook in cast iron, but it leaves behind a greasy pan that you must now clean.

One person new to cast iron cooking made some bacon and then realized they didn’t know the best way to clean the greasy pan.

They had heard you can’t use soap but found that hot water alone wasn’t enough. The water repelled the grease.

Another person wanted to know if it was better to wait until the grease and pan had cooled or clean it right away.

I had these same questions when I started cooking in cast iron.

So, what have I learned, and how do other people do it?

How Do You Clean Cast Iron After Making Bacon?

After making bacon, you need to know three things about cleaning a greasy cast iron pan. First, you have to properly remove the excess grease left in the pan. You don’t pour it down the drain. Second, you must clean the pan with hot water. And you can use dish soap if you want. Third, the pan needs to be completely dry before putting it away.

I found several ways people remove their bacon grease. Here are a few:

So, is there a best way?

As you can see, there is no consensus on the best way to remove the bacon grease. However, everyone agrees you must remove it before cleaning the pan. No one says to pour it down the drain.

The majority store the grease in its own container, whether it’s to reuse or dispose of later. And most say to do it right away or at least before it solidifies.

Additionally, many point out that you shouldn’t put bacon fat in plastic when adding it while it’s hot. Glass jars seem to be the standard.

And one last thing; people either store the bacon fat in the refrigerator or don’t say one way or another. But does it need to be refrigerated? I have heard it’s not necessary. However, make sure you strain it if it sits out.

If you decide to strain and store your bacon grease on the counter to use in cooking, it will be good for about a month. Bacon fat will last around six months in the refrigerator and up to a year in the freezer.

How I do it

I make bacon almost every morning, so I have it down. When the bacon is finished, I pour some of the grease into a glass jar while it’s hot (not strained). I keep the container in the refrigerator with no plans to reuse it. Though I keep telling myself I should.

I only pour some grease into the jar because I make eggs as soon as the bacon is done. Bacon and eggs are our favorite breakfast made in a cast iron skillet.

I talk a little more in-depth about our breakfast of bacon and eggs in the Backyard Creations Skillet Review.

I cannot verify some of these methods, but they must be okay if it works for them. The only one I question is putting water in your pan and letting it sit for 15 minutes.

Although I don’t think anyone recommended this, it should be noted that you don’t use cold water on a hot pan. Sudden temperature changes can cause cast iron to crack.

How I clean my pan

I move the pan off the burner, so it will be cool enough to pick up by the time we finish eating.

Before taking it to the sink, I take the paper towel the bacon was on and wipe out what little grease is left as well as the loose food particles.

Next, I use the scraper to get off as much of the stuck-on food as I can. Once in a while, I need to use my chainmail.

Then, I rinse the pan under hot water and only use soap if the skillet is still overly greasy and the water doesn’t seem to be getting it off.

Last, I use a brush to go over the cooking surface and give it one final rinse.

Would you believe that not everyone has the same way of drying their pan?

It’s true, but how many ways can there be? Let’s name a few:

People use paper towels, kitchen towels, lint-free towels, or no towels at all. Lint clings to cast iron, so whatever you use, you want it to be lint-free.

And you want your pan to be completely dry just in case the water gets through the seasoning and rust appears. If your pan is well-seasoned and has built up several layers, it is less likely to rust from not being as dry as it could be.

But the expert advice continues to be to dry your pan thoroughly.

The fourth reason is how I dry my skillet. I use a lint-free towel to dry it and then put it on the stovetop on low heat to get it as dry as possible.

I put this fourth step as optional because so many people only do it some of the time.

If your pan has several layers built up and it’s dry when you put it away, it will be protected until the next time you use it.

After all, most Cast Iron manufacturers tell you that cooking is the best way to build up your seasoning.

I will go through the steps that almost everyone agrees on:

This method is the one I use occasionally. More often, I take my designated oil rag and give it a quick wipe over the cooking surface.

I then wash my oil rag by hand when it gets too saturated. I picked up this way from a friend who has been using cast iron for a long time.

How to Clean Cast Iron – After Making Bacon

So, there you have it. That’s how you clean your cast iron pan after making bacon.

As you can see, there are a variety of ways. Still, each method includes three essential steps: remove the excess bacon grease before cleaning, wash the pan, and dry it thoroughly.

An additional step of oiling the pan is optional, though practical.

Whatever you do, don’t stop making bacon in your cast iron skillet.

And let me know how often you make it.