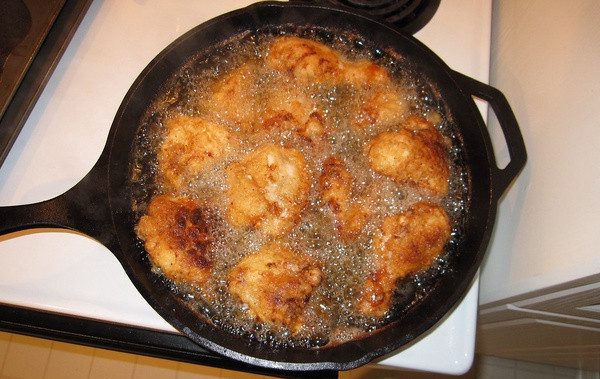 Have you ever asked, “Why do we fry food in oil instead of water?”

Water would be healthier and cost less.

Or maybe you just want to understand the way things work.

Whatever your reason for asking, let’s consider why we fry food in oil and not water.

In addition, let’s answer the question as to whether you can fry in water. And how you would do it.

So let’s get started.

Why Do We Fry Food in Oil Instead of Water?

We fry food in oil instead of water because frying in water is impossible. That’s because water can’t cook at a high enough temperature, nor can it cause your food to get a brown crust. Only oil has the right chemical make-up to make this happen. Therefore, only frying your food in oil can give you the delicious taste of fried food.

You can’t fry food in water because water can’t get hot enough.

And just as you can’t fry water, you also can’t boil oil.

Oil breaks down and smokes, but it does not boil.

Any moisture on the surface of the hot pan immediately turns to vapor and disappears.

Plus, if your food is wet when it hits the pan, the water in the oil will cause the oil to splatter.

On the other hand, the crust you get from frying in oil keeps much of the water inside the food.

And what happens to the water trapped inside?

It boils and cooks your food from the inside out.

So water does have a part in frying. But its role is boiling and cooking the inside of the food.

2. Oil Has an Ideal Chemical Composition

The oil coats the food as you fry it, making a brown crust often referred to as the Maillard Reaction.

The changes that take place in the oil as it heats up are quite complex.

Simply put, the heat begins to degrade the oil.

You will notice things such as the oil getting darker. The oil may also appear thicker and smoke once it reaches its smoke point.

All of these changes in the oil are what make it ideal for frying.

The chemical composition affects the food’s flavor, texture, and smell.

If you want to know more, see Frying Oil – an overview by Science Direct.

So, why do we fry food in oil if it’s not as healthy as cooking in water?

Because of the taste.

According to Science ABC, frying has been around for at 2,500 years or more. We have records of people in ancient Greece eating fried chicken. And it has been in Europe for over 700 years.

And because of how good it tastes, people tend to eat more fried food than is good for them.

Are there ways to make food that mimics the fried-in-oil taste, or do we have to use oil?

For example, french fries are typically deep-fried in oil, but you can also bake them. The taste will be slightly different, but baking can still brown and crisp the outside and give you a soft inside.

However, if you want the fried-in-oil taste, you must use oil.

So, what would happen if you tried to make french fries in water?

When You Make French Fries in Water

Why can’t you make french fries in water?

Well, first, you must keep in mind that it’s impossible to heat water above its boiling point (212°F/100°C).

So, that means after the water has evaporated, you still must heat the potatoes another 50° to have any hope of browning.

However, since you only have the potatoes and the cooking surface of the pan, you will get scorching.

Scorching is not the kind of browning you probably want.

Using the oven is a better alternative than cooking french fries in water.

In fact, the oven will always be the way to go if you want browning and crisping and don’t want to use oil.

On the other hand, if you can also use less oil if you want.

You can also use a water-based technique that combines a tiny bit of oil with cooking in water, as shown in the video below.

Often frying involves a coating of some sort, but it doesn’t have to be breaded.

Fried Artichokes with Gremolata is an example of a fried vegetable made in oil but without any breading. The oil is the coating.

This dish is classic Roman Jewish cuisine. It’s simple and delicious. It’s also fried, but without any breading. Therefore it is also healthier than breaded fried foods.

The recipe is from my cookbook, Cast Iron: The Ultimate Cookbook by Rachael Narins.

I used my 12-inch skillet and two artichokes. I wrote about my experience below.

I had a terrible time making the fried artichokes. I knew nothing about artichokes and only saw one size at the grocery store. So I bought them.

When I realized the recipe called for baby ones and I only had huge ones, I tried to adjust.

It was a huge mess and I’m sure I didn’t do it right, but in the end, they were cooked.

I skipped the gremolata but found out I really like the taste of artichokes.

Have you ever cooked them before? I might make them again, but I will steam them and not fry them.

For frying, I will stick to potatoes or mushrooms which I already know how to make.

Hopefully, you found the answer to the question, “Why do we fry food in oil instead of water?” as fascinating as I did.

It isn’t possible to fry food in water and achieve the same results as frying in oil.

By its very nature, frying includes higher temperatures than water can get.

Therefore, you won’t get the same crispiness or browning without some oil.

Oil has the right composition for cooking at higher temperatures.

It’s also why the food tastes so good, making the outside of the food brown and crispy.

However, just because fried food tastes better doesn’t mean you should indulge.

It is wise to find a balance, and eat everything in moderation.

Even though the artichokes recipe didn’t turn out as well as I hoped, I’ve still found some wonderful recipes in the cookbook. I still recommend it.

So, if you are looking for some great recipes and interesting tidbits about cast iron, consider Cast Iron: The Ultimate Cookbook.