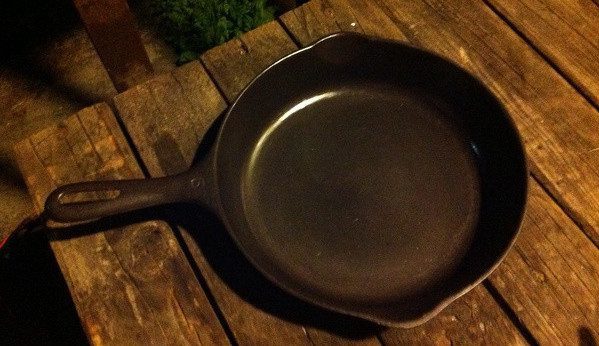 Are you asking, “Why is my cast iron skillet brown after seasoning?”

You thought it was supposed to be black like the factory pre-seasoned ones are.

My first skillet came black, but after cooking in it a little and seasoning it once in the oven, I noticed areas of brown.

I wasn’t sure if it was rust or I was losing my seasoning.

Others have removed the pre-seasoning opting to start from scratch, and are surprised when their pan turns out brown instead of black.

Should you be concerned about a brown-colored pan?

Why is My Cast Iron Skillet Brown After Seasoning?

When doing your own seasoning from bare cast iron, which is gray, your pan will turn a bronze color. It’s bronze because seasoning once will not carbonize your skillet enough to turn the pan black. A brown-colored pan is still polymerized and okay to use; it doesn’t indicate rust. Only repeated seasonings or use over time will give it the black patina. Keep in mind that the color of your pan isn’t as important as how it performs.

When a skillet comes out of the mold, it is gray in color.

Most manufacturers preseason their pan now, but they didn’t always.

Lodge, for example, used to dip the pan in wax before shipping.

The wax protected the cookware from rust until someone purchased it and seasoned it themselves.

However, the pan itself was gray, not black.

Today, we are used to black pans.

You either buy a new pre-seasoned skillet or acquire a vintage one that has become black over time.

Even neglected pans with rust still have remnants of being black at one time.

Plus, most people buy new, so all they know is that their pan is black when they get it.

But some think they have to remove the factory seasoning and start over.

Let me point out that this notion is false. You can choose to strip the factory seasoning off if you want, but it isn’t necessary.

However, if you did this and now your pan is brown after seasoning, take heart.

Brown-colored pans are not inferior or defective.

The oil has still polymerized and, therefore, will protect your skillet from rust.

The process may surprise you if you are new to stripping and re-seasoning from bare cast iron.

When your pan turns from gray to bronze or brown, you wonder if you did something wrong.

Each time you season or use your pan, the color deepens. Eventually, it becomes black through a process known as carbonization.

If the first step is polymerization, then carbonization is the second step.

Carbonization happens when you heat the oil past its smoke point.

And that’s why Lodge recommends seasoning your skillet at 450-500°F.

Therefore, you would use an oil with a smoke point of less than the temperature you season your pan.

For example, if you wanted to season your pan with Avacado oil, you would have to preheat your oven to something higher than 520°F because that’s what the smoke point is.

In other words, if you wanted to season your pan in a 500°F oven, Avacado oil would not carbonize.

Furthermore, an oven used in homes cannot put on more than a thin layer of carbonization. Which means it will be brown or bronze.

But over time, it will become black.

This begs the question, though, as to why pre-seasoned cookware is black.

For example, all Lodge’s cookware is black from a single factory seasoning.

Why is Lodge’s Factory Seasoning Black?

Because Lodge’s seasoning process is proprietary, it would be hard to know precisely why their pans turn black from only one factory seasoning.

It has led people to wonder if they use a chemical coating.

But this is what Lodge has to say:

“Unlike other companies that use paint for a black sheen, Lodge’s seasoning is 100% natural. The oil is baked on during the manufacturing process, and the black patina that remains is a carbon deposit left by the oil on the skillet.”

There is no reason to not believe them. Lodge is a long-standing, reputable manufacturer. They obviously will have a different seasoning process than what you can do in your oven at home.

However, this has led people to speculate.

Here are four thoughts on why Lodge can get black-colored pans from only one seasoning:

Any of these reasons could be why, but I find the last two the most compelling.

Regardless of why Lodge’s pans are black after only being seasoned once, you should not expect to achieve the same black color from a single seasoning at home.

As I mentioned above, my first skillet developed brown spots.

It is not a Lodge or from another well-known manufacturer. The brand is Backyard Creations. It was inexpensive, but I love the pan.

It is primarily my breakfast skillet for bacon and eggs. I worked with it and built up the seasoning enough, so it is relatively nonstick.

But as you can see, it still has brown spots.

It started out black. Maybe it was painted as Lodge claims some companies do. I have no idea.

I can’t explain why it has brown spots, but I’m pleased with its performance.

All that to say, the performance matters more than the color of your pan.

With patience and use, your skillet will eventually turn black (as well as shiny and smooth), as will mine.

It’s good to know that there is nothing wrong with your pan if it’s brown.

If you’re asking, “Why is my cast iron skillet brown after seasoning?” chances are it still performs well.

It isn’t rusted; it’s just a lower level of carbonization that needs to be built upon.

You’re either starting with bare iron or possibly a black-painted pan that isn’t carbonized.

Either way, the skillet is okay to use.

Continue seasoning it in the oven or just use it.

Eventually, the pan will turn black as more layers of seasoning and carbonization are added.

I hope you have enjoyed reading why cast iron skillets can be brown after seasoning.