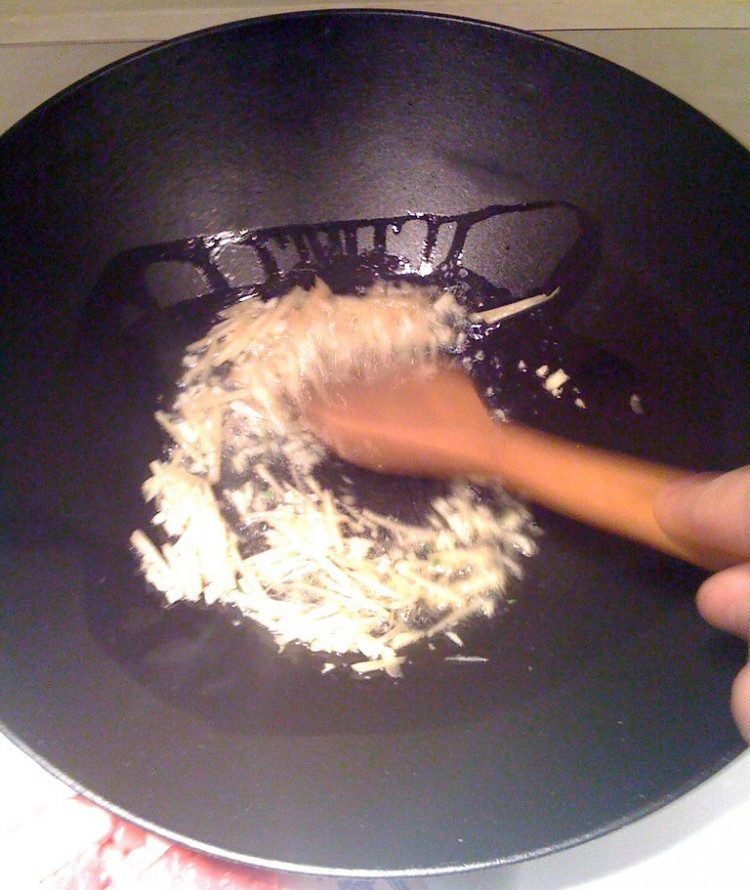 Have you wondered why use a cast iron wok instead of a carbon steel one?

And more difficult to maneuver?

But allow me to explain what the advantages are.

Why Use a Cast Iron Wok?

While the heaviness of a cast iron wok may seem like a disadvantage, that’s only partly true. The heaviness allows the wok to retain its heat, an essential feature for cooking in a wok. Traditionally, lighter weight woks are used over very high heat, which isn’t practical for modern stovetop cooking. Therefore a cast iron wok performs better in today’s home kitchen. However, its superior performance may not outweigh its heaviness for some people.

1. The Heat Retention of Cast Iron is Beneficial

The primary advantage of cast iron, in general, is its ability to retain heat.

This means it will take longer to heat up the pan, but once it’s sufficiently hot, it will stay hot.

And when you add ingredients, the temperature won’t drop near as much.

So, when your meal requires high-heat cooking, such as stir-fry, cast iron will do a much better job retaining the heat.

Since woks are used often in high heat cooking, it only makes sense that cast iron will perform better.

Plus, when you are cooking larger quantities, heat retention comes in handy.

Traditionally, much of the cooking was done over an open fire. Even now, in restaurants, carbon steel works fine because their stoves and grills have the ability to kick out a much higher heat.

However, this isn’t the case in the home kitchen.

Using a cast iron wok performs even better on an electric stove that doesn’t put out as high heat and has no open flame.

As one person puts it in a Quora thread, “Heat capacity. There are two kinds of cast iron woks, the thick Western kind (Staub, Lodge, etc.) and the thin Chinese kind. The thick kind will hold a lot of heat, so you can get away with a wimpier stove. The thin kind seems to create better wok hee, but for that you do need a powerful heat source.

Home kitchens, by in large, have wimpier stoves.

3. Disadvantages to Getting a Cast Iron Wok

Now you have heard the benefits of using a cast iron wok over a lighter carbon steel one (or even the thin Chinese kind).

But you might still be thinking about how heavy cast iron is.

What does a cast iron wok weigh anyway?

Of course, the weight will vary depending on the size you get.

Sizes range from 6.5 inches all the way up to eighteen inches, with the majority of cast iron woks falling somewhere in between.

For example, Lodge offers four sizes, and each one has a different weight:

Now, think about what lifting the wok of your choice as you are cooking will be like.

If it’s a small wok for a side dish or a single-serve dish, no problem.

But once you get to the 12 or 14-inch, the wok will be harder to maneuver.

So, as you can see, the heaviness of a cast iron wok can be a disadvantage as well as an advantage.

And for some people, this disadvantage outweighs any advantage in using a cast iron wok.

Should You Get a Cast Iron Wok?

For this recipe, use leftover rice or make it separately. Have it ready before you begin cooking.

Additionally, have all your ingredients ready ahead of time.

Because, once you begin, stir-frying goes quickly, and you will spend most of your time stirring the ingredients. The cooking process will take about 8-10 minutes, depending on how long it takes the meat to cook.

Unquestionably, a cast iron wok will do a better job for most people cooking at home in their kitchen.

But that doesn’t mean it is right for everyone.

So if you’re asking, “Why use a cast iron wok?” hopefully, you have a better idea if getting one is right for you.

Cast iron wok will retain the heat better and perform better than a thinner, lighter-weight wok in the typical home kitchen.

However, the heaviness of cast iron might be a deterrent.

In the end, only you can decide if using a cast iron wok will work best for you.

Would you use a cast iron wok?

You can let me know in the comments below.

And if you would like to know more about the Lodge 14-inch wok see my review.

4 thoughts on “Why Use a Cast Iron Wok? – 3 Factors to Consider”