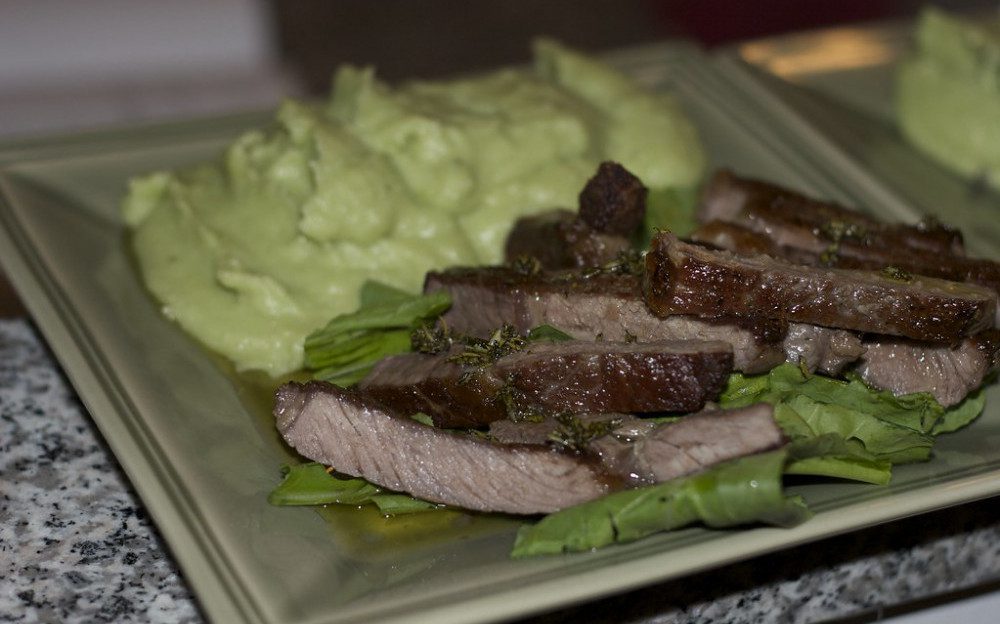 Are you wondering, “Is it wrong to want my steak cooked well done?”

Have you been criticized?

Told you are disrespecting the chef?

Or ruining a perfectly good cut of meat?

These are reasons you may have heard, but shouldn’t you be able to have your steak the way you like it?

Of course, you should, but you also need to be aware of some potential risks.

Meaning, there is some evidence to suggest cooking your steak well-done might be a bigger deal than offending the chef.

Is It Wrong to Want My Steak Cooked Well Done?

While you should order or cook your steak the way they like it, you will also want to know the potential risk of cooking your meat longer. Some studies have shown eating well-done meat over a long period is linked to certain cancers. In addition, if the reason you eat your steak well-done is that you think it’s safer, then you should know that’s not true. There is virtually no risk of bacteria being inside the steak. On the other hand, if you like the taste of well-done steak, then it’s not wrong to want it cooked that way.

1. You Might Be At a Higher Risk of Getting Cancer

You heard me right.

The chemical reactions that happen with high heat create heterocyclic amines (HCAs), which have been linked to cancer in lab animals.

Therefore, the longer you cook your steak over high heat, the more at risk you are.

However, it would also be true for high heat cooking in general, such as searing a steak or most meat cooked on a grill.

Because the charred crust from the Maillard (My-YAR) Reaction, which contributes to the meats umami (ooh-MA-me) flavor, has HCAs.

Consequently, I don’t know how concerning a factor this is for most meat lovers.

Nor do I know how much higher the risk of leaving the steak cook a few minutes longer.

But possibly, if you eat steak all the time or grill your meat daily, you might want to think about this risk.

2. Steak Cooked At a Lower Temperature is Perfectly Healthy

You might look at raw steak and assume it’s not healthy to eat it that way.

Or think that cooking it all the way through is the only way to guarantee it’s safe to eat.

But the USDA says that steak can be cooked at lower temperatures and be perfectly healthy to eat.

All I can say is, if that’s the only reason for eating your steak well done, then you can now feel free to eat it another way.

3. A Good Cut of Meat is Now Ruined

I decided to include one reason often cited for why it’s wrong to cook your steak well-done.

The logic behind this reason has to do with the expertise of the chefs doing the cooking.

Additionally, the process involved in raising the cattle to the actual butchering should be considered.

But who decides if a good cut of meat is ruined anyway?

If a chef doesn’t care about the steak they cook well done, maybe they are the ones who ruin it.

Let me be clear, I am not an expert on steak, so my opinion may not seem valid to those who know much more.

I do not think you can ruin a good cut of meat simply by cooking it to 160°F.

If you watch the video below, you will see what I mean.

As a child, my mom occasionally made cheap steak, and it was dry and tasteless.

One bite would stay in my mouth for what seemed like hours because I couldn’t chew it.

Nevertheless, it’s the way my dad liked it, and so, it’s how my mom cooked it.

As an adult, I decided I didn’t like steak because I never wanted to subject myself to the tasteless, hard-to-chew type of steak my mom made.

But I also couldn’t stand the sight of the blood coming out of a medium-rare steak, the way my husband liked it.

I was well into my adult years before I realized (or was willing to admit) there was something in between.

There are also good cuts of steak and cheap cuts.

But for a while, I still preferred medium-well because I didn’t want to see any blood.

And then I learned that the red liquid isn’t blood, but myoglobin.

So now I like medium, but nothing less cooked because I don’t like the texture or mouthfeel of medium-rare or rare.

And blue steak? No, thank you.

However, I still prefer a burger to steak unless it’s seared.

And for the most part, I don’t want to spend the money in a restaurant for steak.

So I occasionally cook one at home.

There are many reasons why someone might prefer well done:

If that person is you, shouldn’t you be able to eat well done if that’s your preference?

That’s not to say you want a dry, tasteless steak that’s hard to chew.

And it doesn’t mean you want to pay for a rib eye at a restaurant and wonder if you got a cheaper cut because the chef was unwilling to give you the steak you asked for.

Because in their mind, you wouldn’t know the difference since well-done rib eye tastes the same as well-done chuck steak (I doubt that’s true).

Or that they didn’t care enough to cook your steak with the same attention they gave to one they deemed acceptable.

Most people who want well done don’t care what the chefs think. And why should they?

The reason the chef has a job in the first place is that people go out to eat. And it doesn’t occur to them to let the chef decide what they will like best.

A person who wants well-done steak also likes a good dining experience, including enjoying the taste of their food.

Even though my experience with eating well-done steak wasn’t pleasant, that’s not to say that no one else’s can’t be.

If you were asking, “Is it wrong to want my steak cooked well done?” you hopefully have a better understanding now.

It can be both a legitimate concern and a matter of preference.

There may be a risk of cancer from cooking meat at high temperatures. And if you want your steak well done, then it has to cook longer, making the risk a bit greater.

Thinking steak cooked less is somehow unsafe is not valid. Bacteria cannot get to the interior of meat unless it’s exposed to air. And that’s not the case with a steak, as it is with ground meat.

While some will tell you cooking your steak well done ruins the cut of meat, I say that depends. Steak can be made carefully regardless of the doneness.

You can still get the Maillard Reaction, you can even add butter for flavor, and you can do it all without burning it to a crisp and making it dry and tasteless.

All in all, if you like your steak well done, it is not wrong to cook it that way.

What is your favorite steak, and how do you like it cooked?

2 thoughts on “Is It Wrong To Want My Steak Cooked Well Done? – 4 Things to Consider”