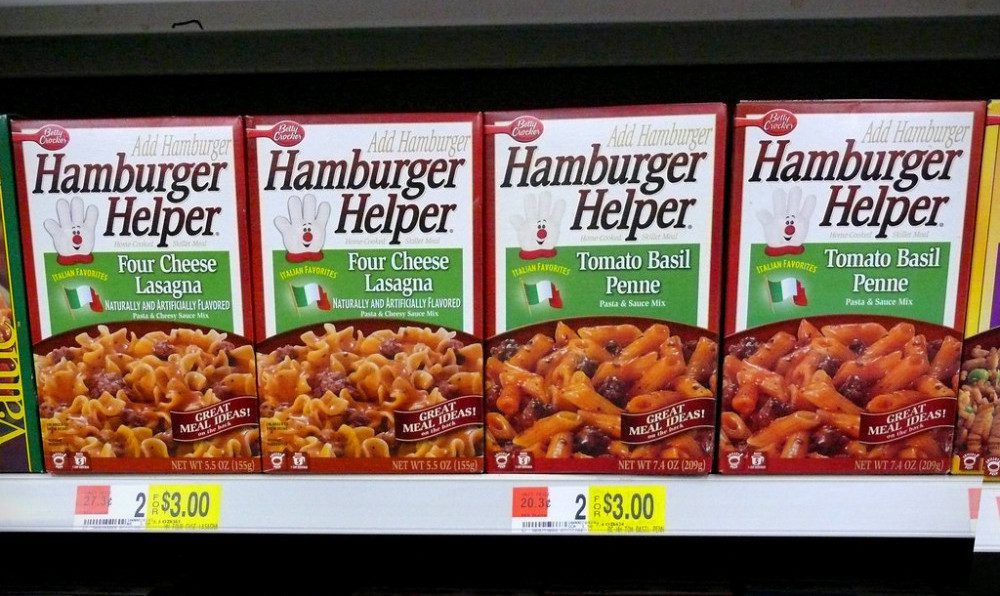 This one-pan meal began as a way to help families stretch their dollars and is still doing that today.

Whether you eat Hamburger Helper as a cost-effective measure or you simply like the convenience and taste, this meal is still popular today.

However, that doesn’t answer the question of whether you can make it in a cast iron skillet.

Can I Make Hamburger Helper in a Cast Iron Skillet?

The simple answer is YES, you can make Hamburger Helper in a cast iron skillet. It makes an excellent skillet meal for a family. And you can doctor it up for more flavor or make it as is. On top of that, making a homemade version of the box mix is easy. However, there’s a couple of things to be aware of: 1) the acidity in tomato might damage your pan’s seasoning, and 2) cast iron itself doesn’t make food taste better. On the other hand, cast iron, in general, is a great choice for cooking meals.

As a Cast Iron Skillet Meal

Basically, making Hamburger Helper as a cast iron skillet meal is nothing more than following the directions on the box but using a cast iron pan.

Or if you find Hamburger Helper is an economical meal, but you like a little more flavor or want to make it a bit healthier, you have many options.

Even if you want to increase the size of the meal to feed a larger family, there are ways.

However, it may be just as easy to make the same meal, but without the box.

I’m not sure how legitimate this concern is, but many Hamburger Helper box mixes have tomato-based products. And tomatoes are acidic and can weaken the seasoning on the pan.

With that being said, I don’t think making Hamburger Helper is the same as simmering a tomato pasta sauce for hours.

Still, it is a risk, mainly if your skillet is newer and hasn’t built up a good seasoning.

Therefore, if you are concerned with this happening, you can stay away from Hamburger Helpers with tomato bases.

Or maybe make your hamburger in the cast iron, but the rest of the meal in another pan.

And, of course, you can simply use another pan.

Another concern is not necessarily a concern either.

But if the only reason you are using cast iron is that you believe it will improve the flavor in and of itself, you will probably be disappointed.

Cast iron does not have any magical properties that make food taste better.

However, many foods do cook better in cast iron.

So it’s possible you will think your Hamburger Helper tastes better.

Although I haven’t eaten Hamburger Helper in years, this box meal still has a place in my heart.

I grew up on Hamburger Helper, and now that I think back, I believe my mom added green peppers to it for flavor.

Plus, when I was a mom of four younger children, Hamburger Helper was one of those meals I didn’t have to think too much about.

It was quick, convenient, economical, and satisfied our family.

I generally made two boxes or had other food to go with it.

However, I wish I had thought about adding vegetables or spices for variation and flavor. All in all, though, I believe Hamburger Helper was a great meal to cook sometimes.

I’m not really sure when I got away from making it, but at some point, I made homemade versions of this box meal instead. And still do to this day.

They are called skillet meals.

I am all about easy but less inclined to eat as much processed food.

Well, if you are a fan of Hamburger Helper but looking for variation, I hope these ideas have helped.

On the other hand, if you’re more a fan of skillet meals than you are of processed box meals, then check out the videos on ways to make homemade Hamburger Helper.

But if all you wanted to know is, ” Can I make Hamburger Helper in a cast iron skillet?” then hopefully, you have learned you can.

Plus, you learned that there is a potential for the meals containing tomato products to damage your seasoning.

Though I think this risk is low, especially if your pan is well-seasoned.

Additionally, if you only use cast iron because you think your food will taste better, then let me remind you that not all food tastes better in cast iron.

Many foods do, but Hamburger Helper isn’t necessarily one of them.

But, go ahead and give it a try so you can see for yourself.

That’s what I did, only I made the homemade version using the recipe from the first video. Instead of hamburger, I used Italian sausage, plus, I put in red onions.