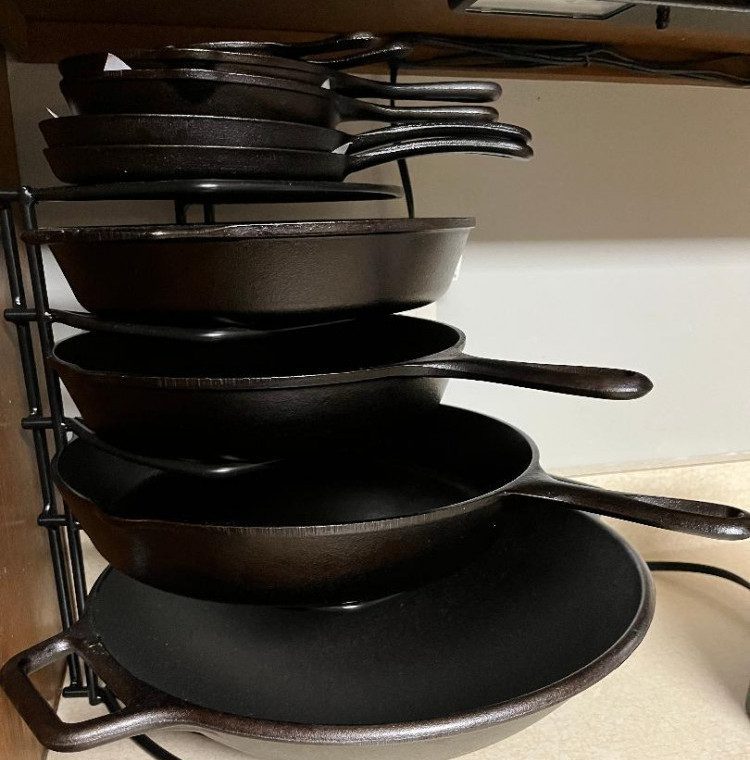 Does cast iron really have benefits?

If so, what are they?

I’ve found at least ten, but I’m sure there are more.

With that being said, let me share them with you.

What are the Benefits of a Cast Iron Pan?

Cast iron has numerous benefits from its durability to its ability to say hot. And when you preheat the pan, it will cook evenly. It gets better over time and eventually gives you a nonstick pan that will last. It can go from stovetop to oven or on the grill and even over a campfire. Additionally, cast iron can be passed down to future generations so they too can benefit.

Cast iron is tough; it’s strong, and it’s durable. In other words, it’s hard to ruin or destroy.

Even if you have an unusable pan, it can be restored without too much effort.

And after years of use, cast iron doesn’t wear out. In fact, it gets better as long as you take care of it.

After you’ve finished cooking your meal, your food will stay hot longer in the cast iron than if you use another type of pan. This is a really nice benefit.

Sometimes, by the time our family was seated and we prayed for the food, we were left to eat semi-warm food. But with cast iron, it has been less of a problem.

As long as you have preheated your skillet slowly, the entire pan will get and stay hot. And because it is hot everywhere, your food will cook more evenly.

However, cast iron is not known for cooking food evenly so that’s why I say if you have preheated the pan slowly.

It’s not perfect with all foods, but in general, I would say it cooks your food the same no matter where it is placed in the pan. In my opinion, it does a better job than some other pans.

For example, we cook bacon in our pan almost every morning. And we love how the whole piece turns out pretty much the same.

I have a gas stove, and it takes anywhere from 3-5 minutes on medium heat to get the pan hot.

4. Cast Iron Gets Better the More You Cook In It

I really like this about cast iron. Most cookware wears out after a while and needs to be replaced but not so with cast iron.

But as long as you season your pan in between uses, the oil will bake into the pan as your food is cooking, creating a nonstick surface.

Because cast iron pans can get better over time, it’s one reason people go to garage sales, flea markets, or antique shops looking for vintage to buy.

Sure, it’s a tiny amount of iron, but even a little can be beneficial. However, it won’t replace an iron supplement if you are low in iron.

And, by all means, if you need less iron in your diet, cooking in cast iron will not be the best for you. But very few people fall into that category.

Generally, people either need more iron or can benefit from a small amount.

As long as you take care of your pan, it will be nonstick for a long time.

With time and many uses, your pan will build up its nonstick properties as the oil or seasoning bakes into the pan. It’s as simple as that.

Sometimes, though, you might cook something that requires more work to get it clean. And in the cleaning, too much of the seasoning is taken off. That’s when you might have to season it in the oven. 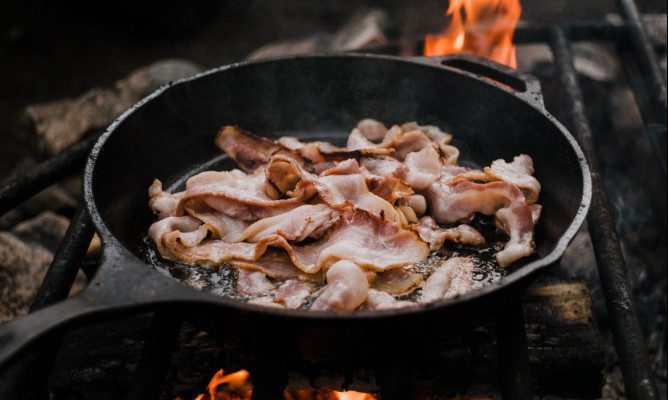 Of course, this is my opinion, but really, I think lots of people agree. For whatever reason, the food gets that nice crust that tastes so good.

When our son-in-law made steaks for my husband and me in a cast iron pan, it was seared to perfection and so tender and juicy on the inside. It was maybe the best steak I had ever had.

I’m not much of a steak eater, but the one he made me was good.

On the other hand, my husband loves steak, and he was equally happy with the one made in cast iron.

I’ve just started making desserts in my cast iron pan. My favorite so far is the chocolate chip skillet cookie with its crispy outside and gooey inside. Of course, it needs some ice cream to go with it, and some hot fudge, maybe some whipped cream to make it complete. Yum!

8. Cast Iron Is Great For Passing Down

I only know this to be true from talking to other people and from what I have read. I didn’t grow up with cast iron, and my mom didn’t have any to pass down to me. Maybe I wouldn’t have wanted it when I was younger; when I didn’t know about its benefits.

Today, I would love to have had some passed down to me. It’s why I think it’s a benefit.

Plus, I will have cast iron to pass down to my children if they want any. I hope they do.

Its versatility is one of the greatest benefits of cast iron. You can use it for frying on the stovetop or for baking in the oven. You can cook with it on your grill or over a campfire.

How many other pans can you say that about?

One of our favorite simple meals I make in the oven is Baked Beans and Sausage. It’s a one-pan meal, or you can add a salad to go with it.

I have also made an easy chicken potpie with refrigerated biscuits (in place of the crust) in the oven.

Still, I haven’t yet used the pan on the grill or campfire, but I can see that in my future.

I have already told you we make our breakfast on the stovetop. I also do a lot of reheating there. And sometimes I will start the meat on the stovetop and finish it in the oven.

I enjoy history much more now that I am older. When I was in school, I didn’t care about history at all.

I remember going to Hawaii during my college years with a group from my school. One day, we had the choice of visiting Pearl Harbor or going to the beach. Guess what I chose? Yep! I decided to go to the beach because I had no interest in Pearl Harbor.

But as I have gotten older, I have come to appreciate history so much more, including the way others cooked in the past.

In the 1800s, almost everyone cooked with cast iron. Some of those pans have been passed down and are still in use today. I find that quite interesting.

And even though my pans are new, I still somehow feel connected to the past. Does that make sense?

It is nice that technology has made many improvements to cast iron cookware.

Today, you can buy pre-seasoned pans or enameled cast iron, all of which are good. We have the best of both worlds, so to speak.

RELATED > > > > > The History of Cast Iron Cookware – From China to America

I have shared with you ten things I like about cooking with cast iron. I think the benefits outweigh the extra care involved, in my opinion.

And America’s Test Kitchen seems to agree with me

I honestly don’t ever see myself going back to nonstick or some of the newer type pans I tried. All of them needed replacing after a while.

Well, hopefully, this has given you a better understanding of what makes cast iron such a great way to cook. And that you can see the many benefits.

If you agree and are looking for a pan, check out Which Size Cast Iron Skillet Should I Get?