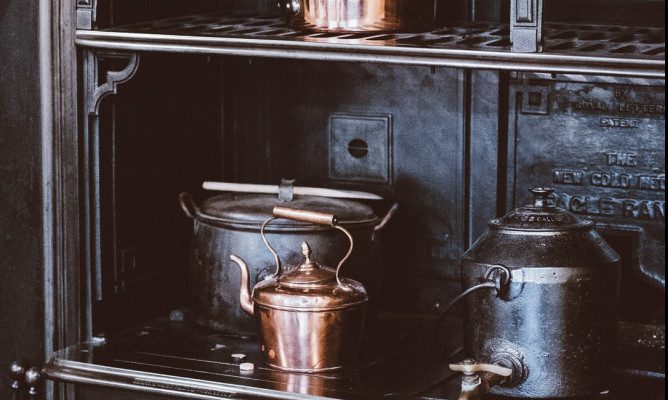 Cast iron has been around for centuries, but iron was a useful product for making many things before it was cast iron.

Iron is first mentioned in the Bible in Genesis 4:22, before the flood. A man named Tubal-cain was a forger of all implements of bronze and iron. He was the first blacksmith, and most likely made tools and possibly weapons.

However, it would still be a while before casting was implemented and used to make cookware.

The history of cast iron cookware began in China and eventually made its way to America, where it is still being used and cherished by many people today.

Because cast iron cookware has been around for so long and is often passed down from generation to generation, it has earned its reputation for being safe and durable.

The History of Cast Iron Cookware

Cast iron has a long and rich history. It began in China in the 5th Century BC and was widespread in Europe by the 16th century. Abraham Darby (1678-1717) greatly influenced the way cast iron is made today when he invented coke smelting in 1709. Although cast iron most likely came over when the first settlers arrived in America in 1607, it was much later before foundries began making cookware. The oldest surviving American manufacturer is Lodge Cast Iron located in South Pittsburg, Tennessee.

From China to Europe

Cast iron artifacts date back to China in the 5th century BC, and the first known use of cast iron cookware was also in China during the Han Dynasty. From there, it spread to other parts of Asia, particularly India, Korea, and Japan.

It’s not known for sure how cast iron got to Europe, but most likely, it came via the Silk Road, an ancient caravan route that connected China to Eastern Europe and was used for transporting goods. The road was named after the highly sought-after silk that came from China.

The first known cast iron in Europe was a pipe made to transport water at the Dillenberg Castle in Germany in 1455. From there, cast iron was used to make cannons during the Reformation.

But when it comes to the history of cast iron cookware, Abraham Darby was the most significant man of his time in Europe.

Casting techniques were widespread in Europe by the 16th century, primarily for artillery purposes. But things were about to change for the iron cookware industry, thanks to a British ironmaster named Abraham Darby.

Initially, Darby cast brass pots and even spent some time casting copper where they used coke rather than coal to heat the furnace. By 1705, Darby had transitioned from working with brass to working with iron, and all of his experiences turned out to be useful in the iron industry.

In 1708, Darby founded the Bristol Iron Works Company and received a patent for his sand casting technique. His method of casting allowed for cooking pots and cookware to be mass-produced and made thinner and lighter. Because they were cheaper to produce, more people could afford them, creating a market for more production and making them quicker. The method Darby used is very similar to the way cast iron is made today.

By 1730, Darby was well on his way to owning a monopoly on cast iron cookware after realizing it was cheaper and more efficient to use coke rather than coal in his blast furnace. Coke burned hotter and more steadily and sustained the higher temperatures necessary for smelting iron effectively.

Between his sand casting technique and the use of coke for burning, Darby significantly influenced the iron and steel industries. The 18th and 19th centuries saw an increase in cast iron cookware in great part due to Abraham Darby.

From Europe to America

Cast iron has been around since the first settlers arrived in 1607. It makes sense that the Europeans would have brought this technique with them. But it wasn’t until 1619 that the Virginia Company of London established the first ironworks facility in the states. It was named Falling Creeks Ironworks and was located in Virginia. Falling Creeks isn’t where they first started casting the iron though.

In 1642, Lynn, Massachusetts became the home to Saugus Iron Works. They made the first cast iron pot which became known as the Saugus Pot. This company is no longer running but is a national historical site for its innovation and contribution to the iron industry.

It wasn’t until much later, and after Abraham Darby’s techniques and practices were adopted, American companies were established in making cast iron cookware.

An early pot had three feet on its base and a lid with a handle for cooking over an open fire and could be most closely compared to a dutch oven one might use today for outdoor cooking. Other types of pots had long handles on them for hanging over the fire.

As kitchen stoves, often made out of cast iron, became more widespread in the 18th and 19th centuries, so did cast iron cookware. Toward the second half of the nineteenth century, three American brands were founded, leading to the majority of families having at least one cast iron pot or skillet for cooking. The three brands are:

Griswold: Matthew Griswold and cousins, J.C. and Samuel Seldon founded the Seldon and Griswold Manufacturing Company in 1865 in Erie, Pennsylvania. For almost a century, they were the leaders in quality cast iron cookware in the United States.

Until the early 1900s, cast iron items were marked with the logo, “ERIE,” but then changed to a “GRISWOLD”

logo. It is the logo you will most likely see today if you are fortunate enough to own a piece of Griswold cookware.

In 1957, the company filed for bankruptcy, and Randall Corporation bought the company. The Erie facility was closed. Randall had also purchased WagnerWare in 1952, and that’s where all production continued. In 1969, Randall sold both companies to General Housewares Corporation, and they continued to produce these two brands through the 1990s.

Lodge: Lodge Manufacturing was founded in 1896 by Joseph Lodge in South Pittsburg, Tennessee. The foundry was called Blacklock.

In 1910, a fire destroyed the foundry, but this didn’t deter Joseph. Within three months, he opened a new foundry down the road from the old one. He called it Lodge Cast Iron, and that foundry is still making cast iron cookware today.

Today, the descendants of Joseph Lodge still run Lodge Cast Iron. They have survived in part because, when times got hard, they took action. During the Great Depression, they started making cast iron gnomes and animals for the garden. And they continued to survive in the 1900s when cast iron cookware took a hit because of Teflon.

Soon after, they added enameled cast iron to the collection. And even more recently, they began making the Blacklock collection in honor of the original foundry.

We took a journey from China to Europe to America to learn the history of cast-iron cookware.

Many manufacturers have opened and closed down over the years.

Of the three American companies mentioned that began in the 1800s, only Lodge is still in existence.

However, cast iron cookware has survived.

In fact, it has made a resurgence in the 21st century as people realize its value and versatility compared with other cookware.