Have you ever wondered, “What is cast iron cookware? How is it made?” You can probably guess it’s cookware made out of iron, but why is it called cast iron? These are good questions and ones we will explore for the next few minutes. There is some science involved so get ready to learn.

I am a participant in the Amazon LLC Associates Program. If you make a purchase using the links in my articles, I receive a small commission.

Getting Iron Ore to the Blast Furnace

The process of making cast iron is quite scientific. Do you remember back in high school science class having to memorize the periodic table (I think it was high school)? One of the elements on the periodic table is iron, and its symbol is FE. I asked my husband if he remembered what the symbol for iron was, and he guessed “I” which makes more sense if you think about it. I know I didn’t remember before I read it. Why FE? I wanted to know so I looked it up and found out the symbol for iron is derived from the Latin name “Ferrum.”

You don’t need to know the symbol for iron though to understand the process of taking iron and making it into cast iron, but I thought it might be fun to think back on those fabulous memories of science class, lol. The only symbol I remembered is the one for water which is H20. I think most people know that one, and maybe you remember others. But we aren’t in science class and we aren’t memorizing symbols on the periodic table; we are talking about what cast iron is. So we better get back to it!

Iron is a raw material found in nature, mainly in the earth’s core. It is plentiful, strong, and inexpensive. Iron is suitable for making many products. One of those products is cast iron cookware. But most iron is in the form of iron oxide, meaning it has come in contact with oxygen. It is found as veins in rocks known as iron ore in the earth’s core. That means the iron must be mined. Although there is some iron on the earth’s surface, most of it is mined from under the ground.

Once the iron ore is mined, it must still go through a process to extract the iron from the ore. So the ore is taken to a foundry where it is first crushed and washed. Then it is put into a blast furnace, where iron is smelted. Smelting is the process of extracting the iron from the ore and melting it down to form a hot liquid known as molten iron.

Inside the Blast Furnace

Once the iron ore is ready to be put into the blast furnace, other things are added. You might find railroad ties, pieces of steel, unused castings from earlier production, and pig iron. All of these things are melted down to 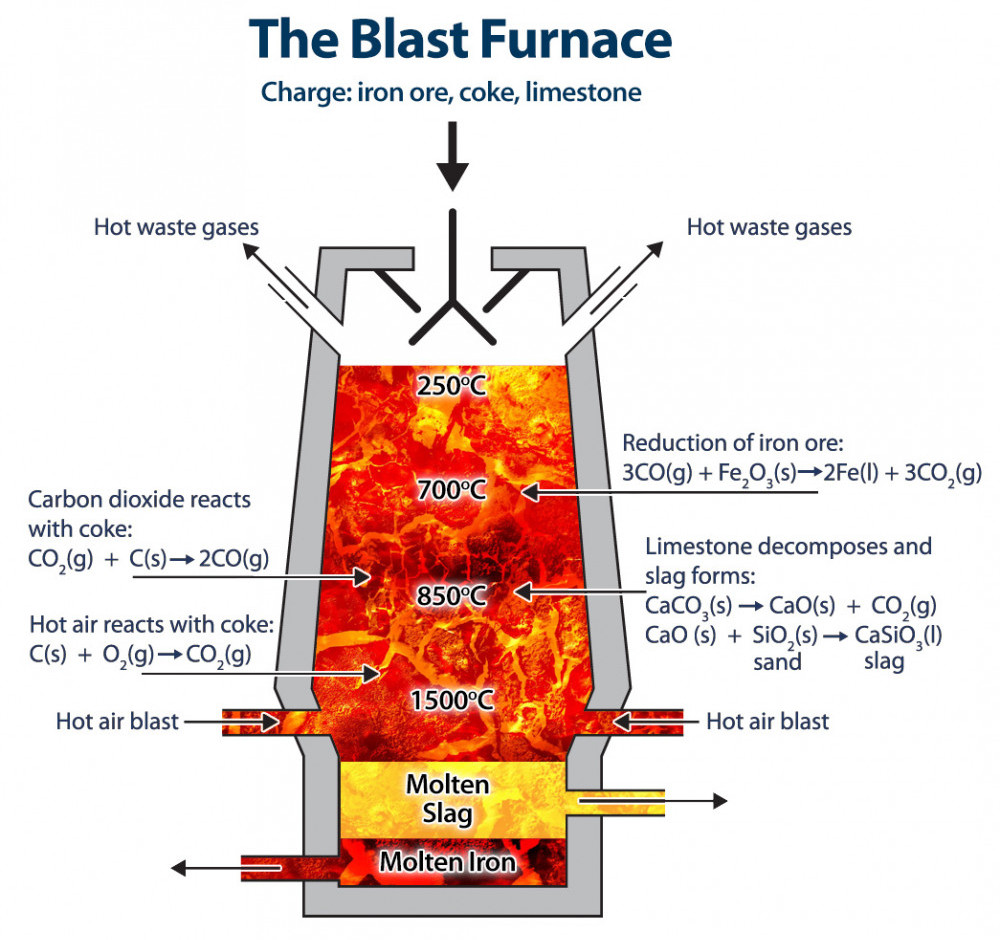 Coke is used to fuel the blast furnace and limestone is added to take out the impurities in the iron.

I learned from the video at the bottom that it takes eleven minutes for one thousand pounds to melt down and become molten iron.

What exactly is happening inside the blast furnace? In the diagram to the right, you can see that there are several chemical reactions taking place. The coke burns with oxygen to produce carbon dioxide (CO2). Both the CO2 and the heat react with the coke to produce more chemical compounds needed for production.

The limestone reacting with the iron ore causes reduction as the limestone decomposes and forms slag.

Other chemical reactions are happening with the limestone. As the impurities, known as slag, are removed from the iron, they float to the surface of the molten iron allowing it to be easily removed, also known as tapping.

From the Blast Furnace to the Mold

Once the molten iron is tapped from the blast furnace, it is poured into a mold using a ladle. According to Reliance Foundry, iron melts at 2750 degrees Fahrenheit, so this work can be quite dangerous. The workers wear equipment designed to

protect them from the high heat, and with the ladle, they transfer small portions of the iron into molds.

In smaller foundries, the molten iron may be poured straight into the mold without the workers needing to use ladles. But in foundries where a thousand pounds of iron is smelted at the same time, this won’t work.

There are two types of molds that are used in casting: reusable and non-reusable. Non-reusable green sand molds are the oldest and most common way of iron casting.

In the video below, you will see how the sand mold is made. You will also be able to see some of the protective equipment worn.

From the Mold to the Final Cast Iron Product

Now that the molten iron has been poured into a mold, it needs to cool and harden. This process is known as solidifying. Once the mold is solidified, it’s time for what is called shakeout. The shakeout process involves removing the sand from the casting and can be done manually or with machinery.

The cast iron is now in its final form, but that doesn’t mean it is finished.

Next are the finishing work and heat treatment needed to make the cast iron cookware ready to be shipped. There is a lot of work that goes into this final step. 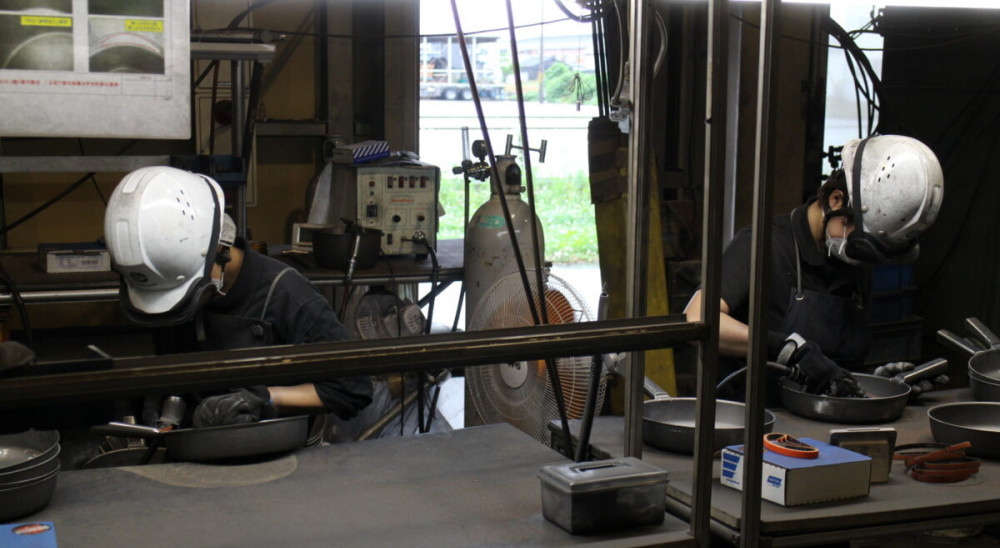 Workers or machines will remove other minor imperfections on the casting with the use of pneumatic tools or Dremels. Burrs, or small bumps, need to be removed and sanded down.

Before the final inspection, the casting will go through a heat treatment to ensure it will be strong and flexible enough for everyday use. Iron is a soft metal, and the heat treatment hardens it. If you own a cast iron pan, you can testify to its hardness.

What is cast iron cookware? It’s more than just a pan. As you can see, there is much work that goes into making cast iron cookware. I had no idea how scientific the whole process was nor did I realize how much is involved. Cast iron starts as a rock with veins of iron inside. A blast furnace removes these veins from the ore, and many chemical reactions take place to melt down the iron so that it can be cast. Casting is the process of putting molten iron in a mold to give its form, letting it cool and harden so that it comes out in the designed shape. Once it goes through the finishing process, receives heat treatment, and goes through its final inspection, the cast iron cookware is shipped to places where people can purchase them or order online.

I hope you have enjoyed reading about how cast iron is made. If you have any questions or thoughts you would like to share, please leave a comment below, and I will get back to you.