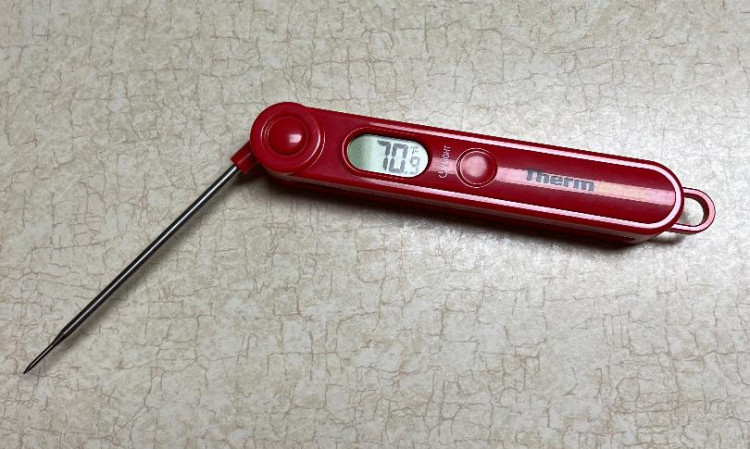 For most of my adult married life, I didn’t own a meat thermometer. I generally cooked using a recipe and just went by what it said. If we cooked on the grill, we usually guessed.

Maybe it wasn’t the best way to cook meat, but I didn’t know.

However, after I started cooking in cast iron and doing all kinds of research, I realized how little I knew about cooking. As a result, it has been a fun and interesting journey learning not only how to cook in cast iron, but how to cook differently in general.

For example, getting a meat thermometer.

It’s a valuable tool to have in your kitchen. Yes, it’s good for cast iron, but also for so much more.

But maybe you already know that.

So, whether you are looking for your first meat thermometer or the right one for you, welcome to my ThermPro TP03 Meat Thermometer Review.

What is a Meat Thermometer?

ThermPro officially became a brand in 2014. Before that, management was working behind the scenes as a manufacturer. However, when their clients began looking for cheaper alternatives, ThermoPro was born.

Their website says, “We decided to open lines directly to the retail market, providing consumers with top quality products at a very competitive price without sacrificing functionality or quality.”

ThermPro now works closely with their manufacturing partners to “negotiate the lowest possible prices for ThermPro products, then we distribute and support our own product line to maintain affordability for our customers.”

Additionally, you can find their products on Amazon and at stores such as Walmart, Target or Home Depot.

They ship their products from warehouses around North America and elsewhere so that customers receive the quickest shipping times.

And from what I can gather on their website, they ship to or have warehouses in the U.S., Canada, Germany, France, Italy, UK, Spain, and Australia.

However, their products are made in China.

No, the thermometer is not waterproof. A few drops of water probably won’t hurt it, but you risk it no longer working if it gets rained on or you immerse or run it under the water. Simply clean it with a damp cloth.

How long does the battery last?

It’s hard to say since it depends on how often you use it. However, one person who used their thermometer 2-3x/week and checked the temperatures a few times each said there’s lasted about 8 months.

How do you change it from Fahrenheit to Celcius or vice versa?

There is a tiny red button on the back, and next to it, it will say °C/°F.

Why doesn’t the temperature read 0° when you turn it on?

It reads the air temperature.

How do you turn it off manually?

Push and hold down on the on/off button in the middle.

Will the numbers flip when you turn the thermometer around to the other side?

No, the numbers are stationary.

What else can you use this thermometer for besides meat, candy-making, and deep-frying?

It can measure the internal temperatures of any liquids and solids. However, it will not work if you need to leave the thermometer in something hot for any length of time. The plastic will melt. Some people have suggested it would work for candle or soap making, but not canning.

Is this thermometer worth getting if I only use it a few times a year?

That’s up to you, but I would say yes. But only because of the benefits a digital thermometer gives you. It’s affordable, reads the temperature quickly, and most say accurately, plus it saves you time.

Can it be used to measure the temperature in the refrigerator or freezer? What about an ice bath?

Yes, to all three as long as it can read the temperature. The description in Amazon says it gives an accurate reading for temps between -58°F/-50°C and 572°F/300°C. And the thermometer will display LL.L when the temperature is too low to read or HH.H when it’s too hot.

How do you calibrate it?

This thermometer does not need calibration, but one seller suggested it calibrates at 0°, and someone else said it calibrates when you turn it off or change out the battery. I do not know if this is right, though. Several others said they would just get a new one if it stopped reading accurately and was past the warranty period.

What is the warranty?

According to the ThermoPro website, the standard warranty is one year. However, if you register your thermometer with them, it is three years. Check it out here.

How deep do you need to put the probe in to get an accurate reading for meat?

Insert the probe to the middle of the meat to accurately test for meat doneness. Look at the back of the thermometer to see recommended internal temperatures.

How do you get the probe back in the case?

If your probe is extended all the way, you need to push the button to release it. Then guide it all the way back until you hear a click. If it’s only partially extended, you just need to push it back in.

Can the thermometer be used to measure the surface temperature of a cast iron pan?

I decided to try it, and the temperature continued rising as I held the probe to the pan’s surface, but it was in no way instant. Nor do I know if it was accurate since this thermometer is designed to be inserted into something. You would be better off with an infrared thermometer to measure surface temps.

How long will the thermometer last?

It depends on how often you use it or how well you take care of it. Some people said their thermometer never worked again after changing the battery but one person said hers is still working after six years.

What if I’d rather not use a meat thermometer?

Well, you can guess or assume the recipe’s time is correct as I always did, or use the finger test, especially for steak. However, it won’t work for larger cuts of meat such as turkey, chicken, roasts, or ham.

RELATED > > > > > Can I Test for Steak Doneness Without a Thermometer

Overall, the reviews were excellent, but as with any product, sometimes they are defective and don’t hold up as well. Most of the negative reviews began with positive comments. That means they liked the product until it broke.

I get the idea from the reviews that the thermometer will not last forever, but for the price, it’s worth replacing with the same kind.

People who liked this product said things such as:

As you can see, not everyone had the same experience, but the majority thought it was a great product.

I’ve only used mine a couple of times, so I don’t know if I can give an opinion from experience. However, I really like the way it works so far.

It is easy to use, though I found it a bit hard to read when inserted in the roast. The inside of my oven is kind of dark even with the light on, and I can’t wear my glasses because they get steamed up. The numbers are big enough, but the light didn’t seem bright enough or something. Anyway, I had trouble reading the temperature.

I used to work in a school cafeteria, and we always took the food out of the oven to temp it, so that is what I will need to do.

Reading the reviews gave me some ideas about other ways I might use the thermometer. For example, some people used it to test the temperature of their tea. Or baked goods, though I’m not sure that’s necessary. Another idea is temping my soup, so I might try that.

Primarily I will use it to see if my meat is done.

Tonight I made pork chops in my cast iron skillet, beginning on the stovetop and finishing in the oven. After cooking both sides, the internal temp was 121°F. So I transferred them to the oven and cooked them for another 15 minutes or so. As you can see from the picture, the pork chops were now at 176°F.

I am so happy to finally have a meat thermometer and am perfectly satisfied with the ThermoPro.

Another thing I learned from reading the reviews was how people used the magnet. When I was finished, I cleaned the probe and put the thermometer on the side of my oven. I hope I remember where I put it!

Because I personally like my ThermPro meat thermometer and it received high reviews, I can recommend it.

You’ve now come to the end of my ThermoPro TP03 meat thermometer review.

Hopefully, you now have a better understanding of this thermometer and if it’s something you might want.

I tried to answer some relevant questions you might ask (I couldn’t believe how many questions there were) and go over the pros and cons of this product.

Additionally, I shared my limited experience and initial thoughts about the thermometer, which were mainly positive. And as long as I take the meat out of the oven before inserting the probe, my only negative comment is no longer valid.

Furthermore, a meat thermometer is a helpful tool to have in your kitchen.

Unquestionably, many people agree and are satisfied with their meat thermometer. As am I.