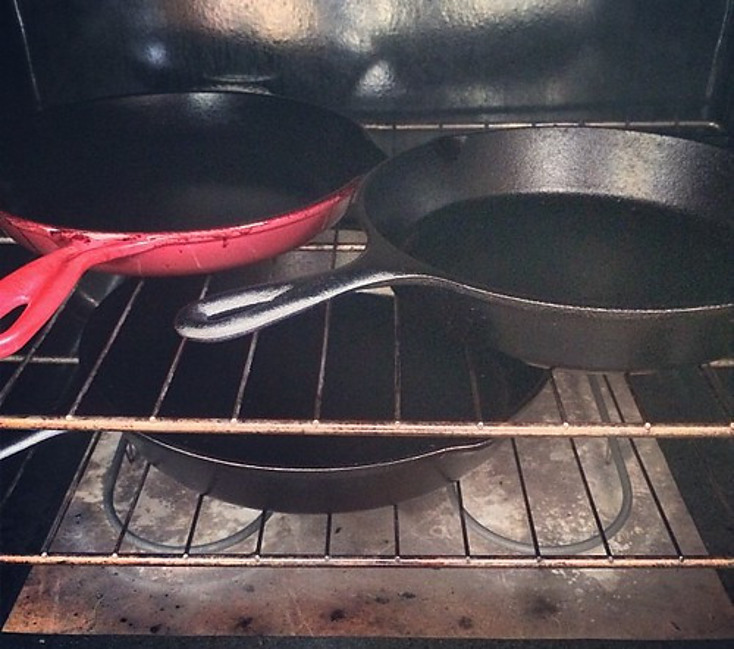 Have you heard about the controversy surrounding seasoning your cast iron cookware with flaxseed oil?

Some people swear by flaxseed, while others tell you it’s the worst oil you can use to season your pan.

So, who is right? Does flaxseed indeed give you better results, or is it based on deception, giving you a hard surface at first but one that eventually leads to flaking?

Why is Seasoning Cast Iron With Flaxseed Oil So Controversial?

Flaxseed oil is the only edible drying oil, making it ideal for building up layers of seasoning on your cast iron cookware. However, many people complain that flaxseed oil flakes easily. Further controversy is that it’s more expensive and harder to find. According to some, flaxseed oil has a low smoke point and strong odor making it less ideal for seasoning.

Where It All Began

The controversy began several years ago when blogger, Sheryl Canter, wrote an article entitled “Chemistry of Cast Iron Seasoning: A Science-Based How-To.” And it made it to the front page of Google.

Canter does not claim to be a scientist but a “writer, programmer, and helping professionals with degrees in psychology, counseling, and fine arts. The programming part is self-taught,” according to her website bio.

And she wrote this article as one interested in understanding the chemistry behind seasoning.

When she couldn’t find much science-based information, Canter reached out to another blogger. He seemed to have some interesting points in his article on cast iron (at the bottom of his blog, he links a forum discussion between them).

And she came away with two clues: the phrases “polymerization” and “drying oil.”

She says, “From there, I was able to find the relevant scientific literature and put the pieces together.”

However, people using flaxseed oil don’t always get the promised results. And experts, such as Lodge Cast Iron, don’t recommend this oil.

Below are five reasons why flaxseed oil may or may not be the best option for you.

Some people have tried flaxseed oil, but the seasoning began to flake after several uses.

I mean, who cares how nice your pan looks initially if the seasoning doesn’t last? Who wants black specks in their food? And who wants to repeat this extensive process all the time?

The people who have had this experience say flaxseed oil doesn’t work, and you shouldn’t use it.

But others say flaking results from using the wrong flax oil or not following the directions on how to season.

I will note that seasoning with flaxseed oil uses a different process and you should follow it.

Many people don’t realize there are two types of flaxseed oil, and you won’t get the same results if you use the wrong kind. You must use 100% organic flaxseed oil rather than flaxseed with added ingredients.

You will find organic flaxseed oil in the refrigerated area of the health food section in your grocery store or at a health food store. You can also order it online directly or from places such as Amazon.

If your bottle of flaxseed oil doesn’t need to be refrigerated, it’s not the right kind.

Additionally, the seasoning process differs from using cooking oils such as grapeseed or canola. And if you don’t do it right, you might get a seasoned pan that flakes easily. However, you will get a hard, glass-like surface that will last if you follow the directions.

For more details on the type of flaxseed oil or how to season with it, click the link above to find directions in Sheryl Cantor’s article.

Or you can read an article from Kitchn where Cambria Bold takes you through her experience of seasoning with flaxseed oil based on Sheryl Cantor’s method.

One comment in the Kitchn article is from a chemist (KitchenMouse) who says you shouldn’t season cooking pans with flaxseed oil because of its high unsaturated properties. Interesting.

Here, I will just say her directions are similar to how you season with other oils, except for the number of coats.

Flaxseed oil needs a minimum of six coats. And each coat involves three hours; one to bake at 500°F and two to cool in the oven. Three times six equals eighteen hours. Including prep time, you should count on it taking a minimum of nineteen hours.

And, if you need to strip your pan first (which will usually be the case), that’s another thing. And it will add to the time.

However, you won’t have to worry about rust after the first coat. And you can finish additional coats over several days.

As you can see, the process is extensive. But you might find it worth it if you like the results and don’t have to do it again. Because the truth is, your best seasoning takes place while cooking.

This process is mainly a starter seasoning that will continue to improve with use.

Seasoning with flaxseed oil is more about getting a head start on having a slick, hard pan. Slick and hard are two things that make cooking and cleaning easier and more enjoyable.

RELATED > > > > > Why Strip the Seasoning From My Cast Iron Skillet? – 3 Reasons to Consider

Flaxseed oil costs quite a bit more than your standard cooking oils. You can see some examples of prices on Amazon.

And Lodge says the price is one of the reasons they don’t recommend seasoning with it.

However, some find the price worth it because they like the slick, hard surface they get.

Furthermore, you may never have to reseason your pan in the oven again if you follow the directions using the right oil.

3. Flaxseed Oil is Harder to Find

You can’t just go to the grocery store and pick up a bottle of flaxseed oil in the cooking oil aisle.

But that doesn’t mean your grocery store doesn’t carry it. If your store has a health food section, they likely sell 100% organic flax oil in the refrigerated section of the health food area.

Most people don’t shop at health food stores, but you can also get it there.

Moreover, many people get their products online, and it’s easy to find organic flaxseed oil at places such as Amazon.

So, saying flaxseed oil is harder to find might be a bit of a misnomer.

Flaxseed Oil Has a Strong Odor and a Low Smoke Point

Although neither the odor nor smoke point seems to be reasons people don’t like seasoning with flaxseed oil, I thought they were worth mentioning.

Lodge says flaxseed oil has a strong smell. And some people agree while others say it doesn’t smell at all.

Sheryl Cantor doesn’t say anything about the odor. But she does say that seasoning with a low smoke point oil in a very hot oven is why it smokes, which is good for seasoning.

However, when I reached out to Lodge with a question about smoke point and oven temperature, this is what they said:

“Whichever oil you choose, it’s important to make sure you heat up your pan to that oil’s smoke point. When the oil hits that smoke point, a chemical reaction called polymerization occurs, bonding the oil to your pan to create a layer of natural seasoning. This process is only for during the cooking process.

To do the seasoning process in the oven for an hour, don’t exceed 500 degrees. The higher the temperature, and baking one hour at a time, will burn off the seasoning no matter what oil you use.”

So, I’m not sure using a low smoke point oil is an advantage. It seems like the opposite is true. And another reason Lodge doesn’t recommend Flaxseed oil.

In the end, only you can decide what oil to use. If flaxseed works for you, that’s wonderful.

I am happy with using vegetable oil, usually grapeseed.

As you can see, the controversy is real. Both sides have some valid points but often leave cast iron users confused.

Why is seasoning cast iron with flaxseed oil so controversial?

First, it isn’t easy to know if you have the right flaxseed oil. If you use the wrong kind, you will end up with flaking.

Secondly, 100% organic flaxseed oil is expensive compared to other oils. Less expensive cooking oils also work well for seasoning cast iron, but the results may not be as good or long-lasting.

On the other hand, you may get the same results if you season your cast iron pan with six coats of vegetable oil. Maybe it’s the six coats more so than the expensive flaxseed oil–just a thought.

Third, flaxseed oil is harder to find. I don’t know if it’s that much harder, but it does take a little more effort to locate it in the store. And your first time buying, it may be confusing picking out the right kind.

I suggest Kuche Chef Cast Iron Oil (4 oz.) or Caron and Doucet Cast Iron Seasoning and Cleaning Oil (8 oz.) on  Amazon since both are specifically made for seasoning cast iron.

However, I hesitate to recommend them since I have never used either, nor have I seasoned my cast iron pans with flaxseed oil. Not because I have anything against it; I am simply not convinced that flaxseed is better.

How about you? What do you think of flaxseed oil?