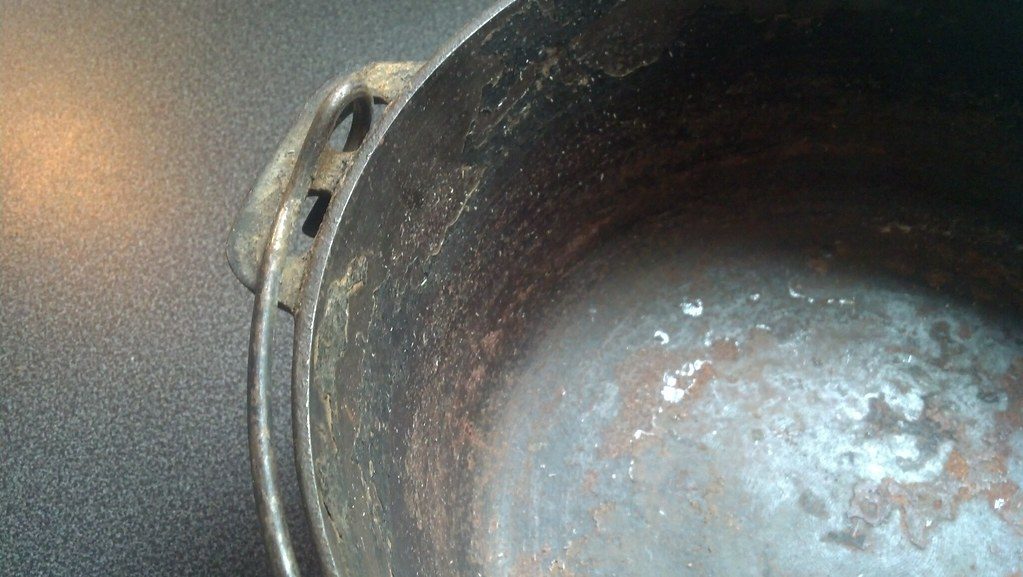 A commonly asked question is, “Why strip the seasoning off my cast iron skillet?”

Maybe you have a cast iron pan that you can’t use in its current condition or a new skillet you’d like to reseason.

And you think stripping the seasoning might be what you should do, but you want to know more.

Stripping the seasoning is a common step for at least three reasons.

Let’s find out what they are.

Why Strip the Seasoning From My Cast Iron Skillet?

There are three main reasons someone might decide to strip the seasoning from their cast iron skillet. The first reason is you tried to get your pan back to the condition you wanted it and couldn’t. Secondly, you want the seasoning done a certain way, and third, you bought the pan used, and it’s in bad condition. Any one of these reasons may lead you to think stripping the seasoning is what you need to do.

1. You’ve Tried Other Measures But Can’t Get Your Pan Clean

There are two reasons why a skillet you own and have used is now unusable.

First, you don’t use your skillet very often, and now the seasoning is flaking.

The flaking isn’t harmful, but it can be unsightly.

And it’s good to know it’s the polymerized oil peeling off.

Flaking is easy to fix, so don’t throw your pan away.

Second, and with a pan you use, you have tried to get it clean but can’t.

This skillet is also flaking or has built-up black residue and made your pan uneven.

And now black flakes are showing up in your food.

You tried various ways to clean it, but none have worked.

Or, if you haven’t yet tried to get it clean without stripping the seasoning, I wrote about methods you could try first in What is the Black Residue on My Cast Iron Pan?

Either way, if your skillet is not like you want it to be, the next step is to strip the seasoning and start over.

It’s not as complicated as you might think, and it’s worth the effort to restore your cast iron skillet.

2. You Want Your Seasoning Done a Certain Way

Let’s say you just bought a new cast iron skillet, and it looks nice but bumpy.

It came pre-seasoned, but since you’re kind of picky. And you’re not sure you like the way the factory seasoned the pan, you’ve decided to strip it and start over.

Wanting your seasoning done a certain way is often why someone with a new cast iron skillet will strip the seasoning first.

It’s not so much the bumpiness, though that may play into it. Because if it was just the bumpiness, you could simply add layers of seasoning to smooth out the pan.

Nope, you want to start from the beginning.

In that case, stripping your pan of its seasoning is what you need to do.

3. The Pan is New to You and In Bad Condition.

You bought a cast iron skillet at a garage sale, or one was passed down to you from your grandma.

Often cast iron skillets that are passed down are in excellent condition because they were used, but not always.

Cast iron pans can fall into disrepair when no one has used them for a while.

And, in that case, stripping the seasoning and starting over makes perfect sense.

4 Methods for Stripping the seasoning

Now that you know why you might want to strip the seasoning from your cast iron skillet, how do you do it?

I found four methods that people use effectively. Hopefully, one of these ways will work for you if you decide to strip the seasoning from your skillet.

Each of the following videos will show a different way to strip the seasoning, but each method will work on a skillet in any condition.

In other words, you don’t have to use the method they are demonstrating only for the condition of the pan they are showing in the video.

So, here they are.

You can use Easy-Off oven cleaner to strip off the seasoning for any skillet.

The video is for a new cast iron skillet, but Easy-Off will work on a pan you picked up at a yard sale. Or one you haven’t used in a while or do use but are having trouble getting clean.

Just keep in mind, it removes the seasoning from the entire pan.

How to Strip and Reseason a Cast Iron Pan

As you can see, this method involves using the coals from a fire, and it will take the longest of the four methods.

But if you regularly have a fire going in a firepit or woodburning stove and want to try this method, it will work as well as any other way.

How to Smooth Rough Cast Iron

This video was mainly about removing the bumpiness of a new cast iron skillet, but sanding removes other types of seasoning as well.

And if you like the idea of sanding instead of heat, then this may be the method for you.

Just make sure you don’t sand too far down or take off more than the factory seasoning.

Also, keep in mind the only seasoning that gets removed is the places you sand.

I will also add that seasoning on top of the factory seasoning should have the same effect as starting from scratch.

But for those who want it done a certain way from the start, I get it!

For this last method, Jeff Rogers uses the self-cleaning oven for an hour.

This way, by far, seems like the easiest method.

But I’ve read that it might not work as well on older pieces if you don’t know their history.

I also know that my self-cleaning oven doesn’t give the option of only 1 hour, plus it tells me to remove all my shelves.

Therefore, I remove the shelves because leaving them in will probably discolor them and make them more difficult to slide.

So if none of these warnings matter to you, and you have a self-cleaning oven, then it’s probably the easiest way to strip the seasoning from your cast iron skillet.

Hopefully, if you were asking, “Why strip the seasoning from my cast iron skillet?” you now have a good idea if this is something you want to do.

If your skillet is flaking or has built-up black residue on it, you may want to strip the seasoning.

Or if you bought a new preseasoned cast iron skillet, on one from a flea market, and you think stripping off the seasoning is the first step you want to take, you can try one of the four methods of doing so.

Easy-Off oven cleaner, using coals from the fire, sanding, or in a self-cleaning oven are all ways of stripping the seasoning from a cast iron skillet.

Have you successfully removed seasoning from your cast iron skillet?

If so, please share how you did it and if it worked well.