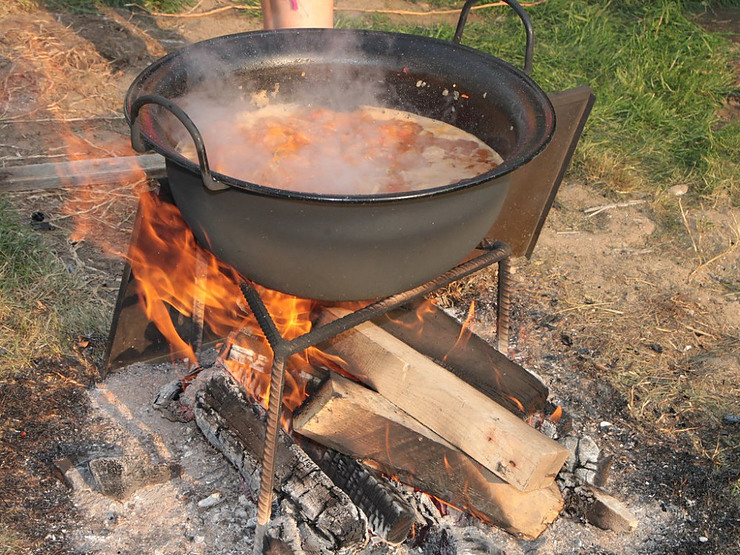 Is your pan smoking when you cook?

Is it creating problems, or are you just wondering if it’s okay?

Some smoke when cooking in cast iron is typical, but it also might indicate that you are doing something wrong.

So, let’s find out more.

Why Does My Cast Iron Skillet Smoke When Cooking?

There are three primary reasons a cast iron skillet smokes. The first reason is that you’ve preheated the pan quickly on high heat, and it gets too hot. Secondly, the oil has gone past its smoke point and begins to break down. Third, you let the pan heat up for too long before cooking. A fourth but less common reason is that you’re cooking in a dirty pan and burning off the leftover food. Some smoke is okay, especially if you need an extra hot skillet for searing or stir fry.

It is best to heat cast iron on medium to medium-low heat for anywhere from three to ten minutes.

When you heat it too quickly, you will get hot spots. Hot spots mean your food will cook unevenly, but also, your pan may begin to smoke in the hottest areas before the rest of the pan is properly heated.

However, when you preheat slowly, you give the entire skillet time to adequately heat, and your cooking experience will be more enjoyable.

You’ll avoid excessive smoking in the pan, and your food will cook evenly.

However, a little smoking is okay.

For example, you need the pan smoking hot when searing steak.

When you put the meat in the pan, you will hear a sizzle, but you may also encounter more smoke.

In that case, some people use a fan or vent to keep the room from getting too smoky. And others remove the battery from their smoke alarm.

I use the vent on the stove, and smoke has never been a real problem.

The oil’s smoke point is important. Various fats and oils have different temperatures at which the oil starts to smoke and break down.

For example, butter has a low smoke point. So, it will start to smoke and break down quicker than a high smoke point oil such as grapeseed or avocado.

Again, smoke isn’t really a problem unless it’s setting off your smoke alarm or filling up the room. But once the oil breaks down, your food is more likely to burn.

I’ve cooked some in butter, and the biggest concern hasn’t been the smoke but that it burns quickly. I must make sure to add the food before the butter burns, which means having it ready.

3. You’re Preheating Your Skillet Too Long

I usually preheat my cast iron pan for 3-5 minutes.

However, I’ve heard others recommend 10-12 minutes.

I think that’s too long, but apparently, those who preheat their pan that long have had good results.

Whatever you decide to do is fine. But you should know that there is such a thing as too long.

My only experience is that I left my pan on the stovetop at a low temperature to dry twice, and I forgot about it. By the time I smelled it, the heat had started burning away the pan’s seasoning.

Even then, my pan wasn’t smoking excessively. I assume it’s because the burner was on low.

I’m sure I  would have had more smoke if I had set the burner on high.

But we’re talking about preheating. In that case, only preheat your pan on high heat if directed.  And turn the heat down as soon as you see smoke. If you forget about it, expect it to smoke.

Additionally, if you heat the oil and pan together, the oil might create more smoke if left on the burner for too long.

4. The Pan is Dirty and Burning Off Leftover Food

I’ve read about a few people who don’t think cleaning your pan in between uses is necessary.

On occasion, I have cooked in a dirty pan myself.

There was no smoke that I remember, but I suppose it’s possible…especially if you use high heat.

In that case, you might get smoke while preheating or cooking in your pan if it has leftover food in it.

I recommend cleaning your pan after each use, even if it’s simply wiping out all the leftover food particles.

How Much Smoke is Too Much?

Sometimes instructions say to wait until your pan begins to smoke before adding your food.

For example, that is what I do when stir-frying in my cast iron wok. I add the oil, set the burner on high, and wait until I see wisps of smoke. I immediately turn the heat down and add my first ingredient (usually eggs).

However, once I add the food, the smoking stops.

If the smoke fills the room or sets off the smoke alarm, you have a potential problem you need to solve.

Hopefully, one of the reasons above will help.

By the way, almost all pans smoke when they get too hot because of pyrolysis. It’s not unique to cast iron.

If you watch the video below, you will notice a reasonable amount of smoke while the steak is cooking.

How to Make Pan-Seared Butter-Basted Steak

So, now you know why your cast iron skillet might smoke while you are cooking or preheating.

Your pan may be too hot because you heated it and the oil quickly on high heat. Turning down the burner to medium or medium-low is your best solution.

Or you might be using the wrong cooking fat or oil for the type of food you’re cooking. For example, you probably won’t want to sear a steak in only butter because butter has a low smoke point and will start burning or smoking before an oil with a high smoke point.

One other reason is you are preheating the pan for too long, and the fat or oil is starting to burn and smoke. In that case, watch the pan more closely, and if you see wisps of smoke, start cooking.

A fourth possible reason is cooking in a dirty skillet with leftover food particles. And the best thing you can do is start with a clean pan.

What is your experience with having a pan smoke while you were preheating or cooking?