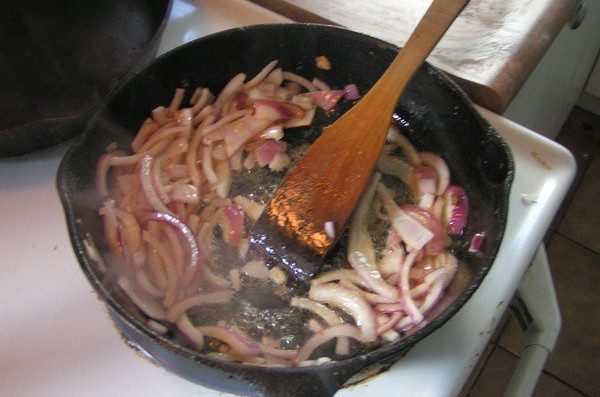 Are you asking, “What should I cook first in my new cast iron skillet?”

You might be new to cast iron cooking, or maybe you’ve had the pan for a while but haven’t yet figured out what to do with it.

Either way, it’s helpful to know what types of food to cook first.

And what not to cook.

What Should I Cook First in My New Cast Iron Skillet?

There is no one food you should cook first. However, whatever you make, it needs to be cooked in oil. Whether you saute vegetables, sear a steak or caramelize onions, you should include plenty of fat. It’s also helpful to know what types of food are more prone to sticking or are bad for the seasoning.

The Best Foods to Make First (or in the Top Five)

As with many things involving cast iron, the answers vary.

What one person says is an excellent food to cook first, another might tell you not to start with that.

Both sides have their reasons, and that’s why I say whatever you make first, use plenty of fat or oil.

Right now, let’s look at a few foods that are suggested and tell you why.

Anything that needs oil  – Everyone agrees that when you start cooking in cast iron, you should only cook something that requires oil or fat of some kind. But some get more specific than that.

Vegetables – Vegetables, in general, are less likely to stick. A good way to start is to stirfry a variety of veggies, saute some mushrooms, or fry potatoes.

Fried Eggs – Interestingly, some think fried eggs are the best way to begin. Others put eggs down the list a little farther, or they don’t make the top five at all. Being able to fry an egg in your pan is a sign of a well-seasoned skillet.

Cornbread – This one surprised me as cornbread is the one food I’ve had the most trouble with sticking. Again, cornbread isn’t the first thing you make, but it’s maybe the second or third.

Bacon – Bacon is the first thing I made in my skillet, but apparently, that’s wrong. Bacon should be the third or fourth thing. That’s because bacon is brined in a sugar solution and sugar is more susceptible to sticking. Plus, it’s not cooking in oil until the bacon fat renders. On top of that, not everyone thinks bacon should be in the top five.

Seared Meat – Most agree that seared meat is in the top five, but not first. Though I don’t see why it can’t be at the top.

Egg Dish – After making a few other foods mentioned above, you will be ready to bake an egg dish such as a frittata (click for recipe).

Roasted Meat – I usually think of roasted meat being in a dutch oven. Still, apparently, you can cook one in a skillet too. However, only after you’ve successfully made a few of the other foods first.

Meat with a sauce – Making a sauce with your meat in a new cast iron skillet is a bit controversial. One says it makes the pan easier to clean. In contrast, another says to avoid making sauces and deglazing until you’ve built up your seasoning.

Chocolate Chip Skillet Cookie – I’ve never had any trouble making chocolate chip skillet cookies, even when my skillet was new. It may have been the first thing I made in my 7-inch skillets since that is why I got them.

Crepes – Although you shouldn’t start with making doughy breads, crepes that are two parts egg, two parts milk (not skim), and one part flour are okay.

What You Should Avoid in the Beginning

In my opinion, any food cooked in oil or fat is an excellent way to start.

However, the one thing you should avoid in the beginning is acidic foods. Acid weakens the seasoning, and when it’s brand new, there aren’t many layers built-up yet.

And as mentioned above, don’t start with doughy bread as it is more prone to sticking.

A few other things mentioned are:

What to Do With New Cast Iron Pans?

Other Tips for Beginners

When cooking in cast iron, a few things will save you a lot of trouble if you know and follow in advance.

So, if you were wondering what to cook first in your new cast iron skillet, hopefully, you now have an idea of where to start.

The number one thing to remember is to cook in fat or oil. Much of cast iron cooking already involves oil, so it shouldn’t be difficult to come up with something.

But just in case you want specific ideas, the list above is a good place to start.

I do not recommend starting with bacon and eggs like I did unless you season your pan a few times. Or you could add a bit of oil to the pan before frying the bacon.

If you are new, what do you most look forward to cooking in your cast iron?

If you’re not new to cast iron, what do you recommend cooking first?