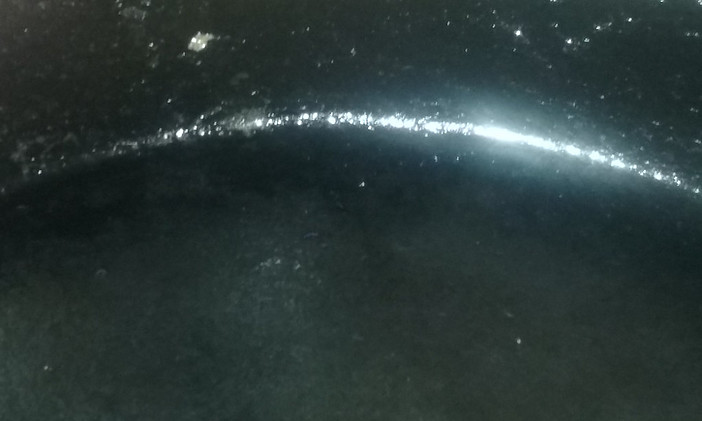 Do you hear the term “patina” in connection to a cast iron pan and wonder what it is exactly?

Can you buy a new cast iron pan with a patina, or do you only get it from stripping and re-seasoning?

Should you care about having one, or is it only for the die-hard cast iron users?

There are many questions surrounding this word. By asking, “What is a patina on cast iron?” we will hopefully find the answers to the other questions as well.

We will look at the term itself, its importance, and how to get a patina on your pan.

What is a Patina on Cast Iron Cookware?

The patina on cast iron cookware is really just another word for the seasoning on your pan. It’s the finish and barrier between the iron and the elements (mainly water and air) that protect your pan from rusting. It’s also what makes your pan nonstick. The patina can be shiny with a polished look like you see on a well-maintained vintage pan, or it can be the factory seasoning on your pan when you first get it. Some people say the patina is black, shiny, and smooth. But it may take years before it looks like that.

Clearing Up Some Confusion

When I typed in “what is the patina on cast iron,” this is what came up first from Ironsmith: “A metal’s patina is actually a thin layer of oxides of the metal, the products of corrosion, that acts to slow down further corrosion. On cast iron, the patina is iron oxide (to the chemist it’s iron oxide; to the rest of us it’s just rust).”

The natural patina on cast iron is the surface layer of rust. Apparently, that surface layer prevents the iron from rusting further. This is good to know, but it isn’t the patina we are referring to for cast iron cookware.

So, let’s look at three other definitions of patina from actual cast iron cookware companies:

1. Le Creuset – “A patina is a layer that is gradually produced over time on cast iron cookware that creates an easy-release surface on the base of the pan. After a pan is seasoned using heated fats and oils, the result is the patina which shouldn’t be washed off or removed. This process improves over time, giving the pan more of a nonstick property.”

According to Le Creuset, the patina is the result of seasoning with heated fats and oils. However, it takes time to get the nonstick properties.

2. Field Company – “Seasoning is the black patina that builds up on your cast iron skillet with regular use, a non-stick surface that’s slick enough for eggs to skate across the pan, but tough enough to withstand the blazing heat needed to properly sear a steak.”

Field Company says seasoning is the black patina that builds up on your cast iron, which is basically the same as saying the patina is the result of seasoning. And the building up of the seasoning is what makes the surface slick.

3. Lodge – “Seasoning is just oil baked onto cast iron through a process called polymerization. It gives your cookware that classic black patina. Seasoning forms a natural, easy-release cooking surface and helps prevent your pan from rusting. It may take a little extra care, but a well-seasoned cast iron pan will last for generations.”

Seasoning is what gives your pan the classic black patina and natural, easy-release surface. This surface helps keep your pan from rust. Although Lodge doesn’t specifically say in this definition that it takes time to build up the nonstick properties, it does elsewhere on its website.

A couple of things to note:

RELATED > > > > > Why Is My Cast Iron Skillet Brown After Seasoning?

How Do You Get a Patina on Your Pan?

There are two ways to get the patina on your cast iron pan.

The best way is to cook in it.

Begin by cooking foods that require more fat or oil, such as caramelizing onions or sauteing mushrooms. Or shallow frying.

Really anything that needs fat or oil for cooking will help build the seasoning and move you towards the goal of a patina with an easy-release surface.

Your pan will be in the oven for an extended time with a thin layer of oil underneath the food you are cooking.

And if you are making eggs or other foods that might stick, you may need to use a bit more fat or oil in the beginning.

I have never stripped a pan and started from the iron, but it sounds like the process is much the same.

Cooking is the best way to build the patina.

However, you will probably need to do one or two oven seasonings first because the iron is exposed. And you’ll want the entire pan to be protected, not just the cooking surface.

Sometimes you hear you should do seven or eight, but that’s not really the best way to establish a nonstick patina.

But cooking foods that require more fat or oil, and baking in your pan, are far better ways.

Also, avoid cooking acidic foods at first (both new and stripped) because the acid will eat away at the seasoning. You don’t want to worry about losing the little you build up when just beginning. But once your seasoning is more established, it will be less of a concern.

Of course, what you cook in it is up to you.

As you can see, there is some confusion about what a patina is on cast iron.

Is it rust or the oil you bake onto the iron?

Well, it’s both. But for cast iron cookware, you want a patina that is black, nonstick, and protects the pan from rust. And the only way to get that type of patina is to build up layers of seasoning on your pan.

Whereas rust is a natural patina on cast iron, no one wants to cook in it.

So, for cookware, the patina had to be something natural that created a protective barrier between the iron and what makes it rust. And that’s what baking fat or oil onto the pan will do.

The best way to get the black patina is by cooking.

However, oven seasoning is another way you will occasionally do if your pan is pre-seasoned. And initially, if you stripped your pan so you could restore it.

What kind of patina does your cast iron pan have?